The micro urban area of Shawnee (in Pottawatomie County) is included in Oklahoma City's Combined Statistical Area (CSA) which brings the area population to 1,498,693. The Oklahoma City – Shawnee CSA is also included as part of the I-35 Megalopolis.

Edmond is a suburb of around 90,000 people northeast of and adjacent to Oklahoma City.

Guthrie the first capital of the State of Oklahoma, lies to the north of Edmond in Logan County.

A separate city, surrounded by Oklahoma City and The Village, Nichols Hills, is just north of Belle Isle, and is an enclave of the affluent with many historic homes and parks.

The Village is another urban enclave that is entirely surrounded by Oklahoma City, except where it abuts Nichols Hills just to the south. Casady School, one of the largest and most well-known college preparatory schools in the Oklahoma City area, is located here.

Chandler is a city of about 3,000 located east of Edmond and north Oklahoma City on U.S. Route 66 and Interstate 44 and north of Shawnee on Highway 18 in Lincoln County.

Jones is a small community of around 3,000 a few miles south of I-44. Its location east of Edmond is isolated and hilly, but convenient to Oklahoma City at large.

Strung out along US-62 to the east of Oklahoma City are Choctaw, Harrah, Nicoma Park, Spencer, and Meeker.

Bordered by southeast Oklahoma City and adjacent to Tinker Air Force Base, Del City is home to about 22,000 residents.[1]

Midwest City is based largely around the sprawling Tinker Air Force Base.

Shawnee, Oklahoma is an exurb of Oklahoma City, somewhat removed from the immediate metropolitan area by a 35-minute drive but is considered part of the Combined Statistical Area. The city of Shawnee has about 30,000 people and is home to two colleges: St. Gregory's University and Oklahoma Baptist University.

These communities are exurbs of Oklahoma City and form a micropolitan area with Shawnee.

Valley Brook is a small town of less than 1,000 nestled into Oklahoma City's south side. It is well known for stripteasedancing clubs and has somewhat relaxed laws for strip clubs compared to the rest of the metro, and several are prominently advertised on nearby I-35.

Moore is on I-35 between Oklahoma City and Norman. Moore's school district supports three high schools, Moore, Westmoore, and Southmoore. 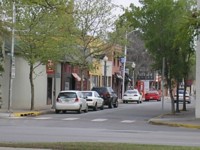 Norman, Oklahoma is the anchor city of the south Oklahoma City Metropolitan Area. Norman is home to the University of Oklahoma, the state's largest university.

These four suburbs/exurbs lie south of Norman along the I-35 and US-77 corridors.

Noble is known as the "Rose-Rock Capital of the World" for its abundance of soil-bound barium sulfate.

Purcell, OK was founded as a railroad town in 1887, with the coming of the Atchison, Topeka and Santa Fe Railroad.

These small communities lie along I-35 just west of the South Canadian River. Goldsby is known for its Chickasaw Nation casinos: Goldsby Gaming Center, and Riverwind Casino, which is one of the largest casinos in Oklahoma.

Traveling along I-44 southwest from the City takes one into the fastest-growing part of the metro, which is known as "Tri-City" after its major constituents: Newcastle, Tuttle and Blanchard, Oklahoma. The area surrounds the tiny town of Bridge Creek. These suburbs have experienced rapid growth over the past 5–10 years as the result of people moving further from downtown Oklahoma City with an estimated combined population of 21,374 (2010 census). Though these communities have suffered growing pains, the increased residential and business development is improving the governments' abilities to improve the infrastructure needs and increase services. Newcastle serves as the epicenter of business development for the region but all of the communities are seeing growth in these arenas.

Chickasha, an exurb of Oklahoma City, is along I-44 southwest of the City. With over 16,000 people, Chickasha is home to the University of Science and Arts of Oklahoma, the state's only public liberal arts institution.

Bethany and Warr Acres are in the suburban inner western part of the city and are largely surrounded by parts of Oklahoma City proper. These suburbs are home to the metro's most competitive tax rates, and have attracted numerous big box retailers. There are a large number of historic motels, restaurants, and bars along old Route 66 (now NW 39th St). Lake Overholser, the city's oldest lake, is surrounded by upscale housing and has recently seen proposals for resort development on its shores. There are growing Korean, East Indian, and Pakistani communities in this area.

Bethany is home to Southern Nazarene University and Southwestern Christian University and has a small, well-preserved main street area along 39th Street near the SNU campus. Unique compared to other suburbs, these suburban "enclaves" have a stagnant population.

Woodlawn Park is an independent enclave within Bethany consisting of 0.1 square miles (0.26 km2) with a population of 161 at the 2000 census.

The eastern Mustang city limits are cut off from the rest of the metro by Will Rogers World Airport, which makes Mustang one of the most remote areas in the metro. Mustang Schools service a large area outside Mustang limits into Oklahoma City, which surrounds Mustang completely. The city of about 21,000 is rapidly growing.

Yukon, the home of Garth Brooks and Cross Canadian Ragweed, is a growing suburb located 13 miles (21 km) west of downtown on I-40 and the recently completed West Loop of the Kilpatrick Turnpike. The city is in the midst of a population and retail boom.

El Reno, named after Fort Reno which once stood there, is an active Main Street community. The Oklahoma Main Street Program is a downtown revitalization program. Once a Certified City, El Reno has transitioned to a Century Community. Also notable in El Reno is the trolley that runs through the downtown area.

These small, rural communities are located south of I-40 along US-81 in Grady and Canadian Counties, respectively, between El Reno and Chickasha.

Piedmont is the fastest-growing city in the metro. As of 2016, the city had a population of around 7,400. It is just a few miles north of the intersection of State Highway 3 and State Highway 4 (at the north end of the latter), north of Yukon.

Towns with fewer than 1,000 people

There are many towns in the Oklahoma City MSA with less than 1,000 population.

In 2005, Hall Park was annexed by Norman and ceased to be a town, becoming instead a group of housing subdivisions.