The Association of Caribbean States (ACS; Spanish: Asociación de Estados del Caribe; French: Association des États de la Caraïbe) is an advisory association of nations centered on the Caribbean Basin. It was formed with the aim of promoting consultation, cooperation, and concerted action among all the countries of the Caribbean coastal area. The primary purpose of the ACS is to promote greater trade between the nations, enhance transportation, develop sustainable tourism, and facilitate greater and more effective responses to local natural disasters.

It comprises twenty-five member states and seven associate members.[2] The convention establishing the ACS was signed on July 24, 1994, in Cartagena, Colombia.

A clickable Euler diagram showing the relationships between various multinational organisations in the Americas (prior to 2019).v • d • e

The Association of Caribbean States is intended to promote regionalism among the member states. The success and functionality of the ACS is greatly debated among scholars. The main goals of the association are "to confirm the new concept of the Caribbean Basin by (A) accentuating those interests the Caribbean nations hold in common and (B) working to eliminate barriers left over from its colonial past."[3]

The organization seeks to use geographic proximity and regional cooperation (regionalism) for political and economic advantage[3] with respect to the global economy and trade blocs such as the North American Free Trade Agreement (NAFTA), European Union, Arab League, and the South Asian Association for Regional Cooperation. The ACS has four distinct areas of interest: Trade, Transport, Sustainable Tourism, and Natural Disasters. Each is pursued by a Special Committee which meets at least twice yearly in order to discuss current regional issues and draft treaties.[4]

One agenda adopted by the ACS has been an attempt to secure the designation of the Caribbean Sea as a special zone in the context of sustainable development, it is pushing for the UN to consider the Caribbean sea as an invaluable asset that is worth protecting and treasuring.[5] The organisation has sought to form a coalition among member states to devise a United Nations General Assembly resolution to ban the transshipment of nuclear materials through the Caribbean Sea and the Panama Canal.

The success of the ACS is debated by many scholars on both sides. Those who suggest the ACS is successful would point to the many initiatives the developmental coalition has undertaken, as well as its large membership and relations with other international organisations like the European Union. Those who suggest it is unsuccessful note how by the end of the 1990s, unlike CARICOM, the ACS had failed to establish a track record which was worthy enough to allow for the evaluation of the ACS as a developmental coalition.[6] Furthermore, some scholars suggest that the ACS is unlikely to become a true player on the international level. Skeptics often point to other failed attempts at economic coalition building like the Central American Common Market (CACM) as an example of the instability of the region.[6] The influence of NAFTA on the Caribbean outlines the future struggle of the ACS. The future of the ACS in relation to the western hemisphere is uncertain. "Despite governmental statements of commitment to liberalisation, it will be difficult for Caribbean countries to succeed in putting their economies on a firmer footing that would enable them to compete effectively."[7]

The ACS has held five summits involving heads of state and/or government:

Relationship with other supranational organisations

Parts of this article (those related to Anguilla) need to be updated. Please help update this article to reflect recent events or newly available information. (March 2012) 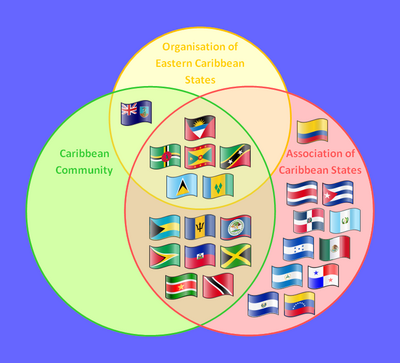