Art made from packaging waste collected in New York City - 2021

Plastic production by industrial sector in 2015.[4]

According to the United States Environmental Protection Agency (EPA), defined containers and packaging as products that are assumed to be discarded the same year the products they contain are purchased.[5] The majority of the solid waste are packaging products, estimating to be about 77.9 million tons of generation in 2015 (29.7 percent of total generation).[5] Packaging can come in all shapes and forms ranging from Amazon boxes to soda cans and are used to store, transport, contain, and protect goods to keep customer satisfaction. The type of packaging materials including glass, aluminum, steel, paper, cardboard, plastic, wood, and other miscellaneous packaging.[5] Packaging waste is a dominant contributor in today's world and responsible for half of the waste in the globe.[4]

The recycling rate in 2015 for containers and packaging was 53 percent. Furthermore, the process of burning of containers and packaging was 7.2 million tons (21.4 percent of total combustion with energy recovery). Following the landfills that received 29.4 million tons (21.4 percent of total land filling) within the same year.[5]

As packaging waste pollutes the Earth, all life on Earth experiences negative impacts that affected their lifestyle. Marine or land-living animals are suffocating due to the pollution of packaging waste.[4] This is a major issue for low income countries who do not have an efficient waste management system to clean up their environments and being the main sources for the global ocean pollution.[4] But 'litter louts', individuals who lack the motivation to recycle and instead leave their waste anywhere they want are also major contributors, especially in high income nations where such facilities are available. The current location with the greatest amount of solid waste that includes most of packaging products is the Great Pacific Garbage Patch located at West Coast of North America to Japan.[4][6] Most packaging waste that eventually goes into the ocean often comes from places such as lakes, streams, and sewage.

Possible solutions to reducing packaging waste are very simple and easy and could start with minimisation of packaging material ranging up to a zero waste strategy (package-free products[7]). The problem is mainly in a lack of motivation to start making a change. But examples of effective ways to help reduce packaging pollution include banning the use of single-use plastics, more social awareness and education, promotion of eco-friendly alternatives, public pressure, voluntary cleaning up, and adopting reusable or biodegradable bags.[8]

The Institute of Packaging Professionals defines overpackaging as “a condition where the methods and materials used to package an item exceed the requirements for adequate containment, protection, transport, and sale.”[9] Overpackaging is an opportunity for source reduction, reducing waste by proper package design and practice.

A classic example of a wasteful package design is a breakfast cereal box. This is typically a folding carton enclosing a plastic bag of cereal. Cartons are typically tall and wide but very thin. This has an inefficient material-to-volume ratio; it is wasteful. Structural packaging engineers are aware of the opportunity to save packaging costs, materials, and waste but marketers find benefit in a “billboard” style package for advertising and graphics. An optimized folding box would use much less paperboard for the same volume of cereal, but with reduced surface area for graphics. The use of a plastic bag without an enclosing box would use less material per unit of cereal.[10]

Slackfill packaging is that which is intentionally under-filled, resulting in non-functional headspace. Packagers doing this not only risk charges of deceptive packaging but are using excessive packaging: packaging waste.[11]

With fragile items such as consumer electronics, engineers try to match the fragility of the product with the expected stresses of distribution handling. Package cushioning is used to help ensure safe delivery of the product. With overpackaging, excessive cushion and a larger corrugated box are used: wasteful packaging. Conversely, underpackaging would be the use of insufficient cushioning. Excessive product waste caused by underpackaging may be worse for the environment than the waste of the package.

Sometimes packaging is designed to protect its product for controlled distribution to a retail store. With online shopping or E-commerce, however, items packed for retail sale may be shipped individually by Fulfillment houses by package delivery or small parcel carriers. Retail packages are frequently packed into a larger corrugated box for shipment. Often these secondary boxes are much larger than needed, thus use void-fill to immobilize the contents. This can have the appearance of gross overpackaging but is sometimes necessary. If the product packager designed all packaging to meet the requirements of individual shipment, then the portion delivered to a retail store would have excessive packaging. Sometimes two levels of packaging are needed for separate distribution, resulting in production inefficiencies.[12]

From 1960 to 2015, this graph represents the total number of tons of glass containers generated, recycled, composted, combusted with energy recovery and landfilled.[5]

Aluminum container and packaging waste usually comes from cans from any kind of beverages, but foil can also be another that contributes it as well. It's been given that about 25 percent of aluminum is used for packaging purposes.[13] Using the Aluminum Association Data, it has been calculated that at least 1.8 million tons of aluminum packaging were generated in 2015 or 0.8 percent MSW produced.[5] Of those that are produced, only about 670,000 tons of aluminum containers and packaging were recycled, about 54.9 percent.[5] And, the ones that ends up in the land fill is 50.6 percent.[5]

From 1960 to 2015, this graph represents the total number of tons of aluminum containers generated, recycled, composted, combusted with energy recovery and landfilled[5]

The production of steel containers and packaging mostly comes in cans and other things like steel barrels. Only about 5 percent of steel use for packaging purposes of the total world of steel consumption which makes it the least amount wasted and the most recycled.[13] It's totaled that 2.2 million tons or 0.9 percent of MSW generated in 2015.[13] While according to the Steel Recycling Institute, an estimate of 1.6 million tons (73 percent) of steel packaging were recycled.[13] Adding on, the steel packaging that were combusted with energy recover was about 5.4 percent and 21.6 percent were land filled.[5]

From 1960 to 2015, this graph represents the total number of tons of steel containers generated, recycled, composted, combusted with energy recovery and landfilled[5]

Paper and paperboard containers and packaging

Later on, they are then combusted which makes 0.5 million tons and landfills received 1.9 million tons.[5] Other than corrugated boxes, cartons, bags, sacks, wrapping papers, and other boxes used for shoes or cosmetics are other examples of paper and paperboard containers and packaging. The total amount of MSW generated for paper and paperboard containers and packaging was 39.9 million tons or 15.1 percent in 2015. Although, the recycled rate is about 78.2 percent and 4.3 percent of small proportions were combusted with energy recovery and 17.6 percent in landfill. 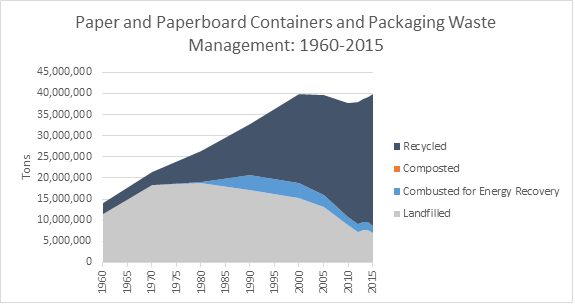 From 1960 to 2015, this graph represents the total number of tons of paper and paperboard containers generated, recycled, composted, combusted with energy recovery and landfilled[5]

Wood packaging is anything that is made out of wood used for packaging purposes (e.g. wood crates, wood chips, boards, and planks). Wood packaging is still highly use in today's world for transporting goods. According to EPA's data that were borrowed from the Virginia Polytechnic Institute and the United States Department of Agriculture's Forest Service Southern Research Station, 9.8 million tons (3.7 percent of total MSW) of wood packaging were made in production in 2015.[5] Also, in 2015, the amount that was recycled 2.7 million tons.[5] Moreover, its estimated that 14.3 percent of the wood containers and packaging waste generated was combusted with energy recovery, while the 58.6 percent went to the land filled. 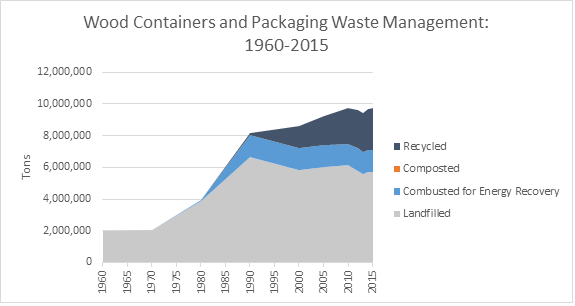 From 1960 to 2015, this graph represents the total number of tons of wood containers generated, recycled, composted, combusted with energy recovery and landfilled[5]

Plastic containers and packaging can be found in plastic bottles, supermarket bags, milk and water jugs, and more. EPA used data from the American Chemistry Council to estimate that 14.7 million tons (5.5 percent of MSW generation) of plastic containers and packaging were created in 2015.[5] The overall amount that is recycled is about 2.2 million tons (14.6 percent).[5] In addition, 16.8 percent were combusted with energy recover and 68.6 percent went straight into the land fill.[5] Most of the plastics are made from polyethylene terephthalate (PET), high-density polyethylene (HDPE), low-density polyethylene (LDPE), polyvinyl chloride (PVC), polystyrene (PS), polypropylene (PP) and other resins.[5] That being said, the recycling rate for PET bottles and jars was 29.9 percent (890,000 tons) and the recycling of HDPE water and milk jugs was 30.3 percent (230,000 tons).[5]

From 1960 to 2015, this graph represents the total number of tons of plastic containers generated, recycled, composted, combusted with energy recovery and landfilled[5]

Role of packaging waste in pollution

Litter mostly consists of packaging waste. Besides the disfigurement of the landscape, it also poses a health hazard for various life forms.[13] Packaging materials such as glass and plastic bottles are the main constituents of litter.[13] It has a huge impact on the marine environment as well, when animals are caught in or accidentally consume plastic packaging.

The production of packaging material is the main source of the air pollution that is being spread globally. Some emissions comes from accidental fires or activities that includes incineration of packaging waste that releases vinyl chloride, CFC, and hexane.[13] For a more direct course, emissions can originate in land fill sites which could release CO2 and methane.[13] Most CO2 comes from steel and glass packaging manufacturing.[13] Most marine species and wildlife species suffer from the following:

Bisphenol A (BPA), styrene and benzene can be found in certain packaging waste.[6][8] BPA can affect the hearts of women, permanently damage the DNA of mice, and appear to be entering the human body from a variety of unknown sources.[6] Studies from Journal of American Association shows that higher bisphenol A levels were significantly associated with heart diseases, diabetes, and abnormally high levels of certain liver enzymes.[6] Toxins such as these are found within our food chains. When fish or plankton consume microplastics, it can also enter our food chain.[4][8] Microplastics was also found in common table salt and in both tap and bottled water.[8] Microplastics are dangerous as the toxins can affect the human body's nervous, respiratory, and reproductive system.[4][6][13]

Governments working with industries could support the development and promotion of sustainable alternatives in order to phase out single-use plastics progressively.[8] If governments were to introduce economic incentives, supporting projects which upscale or recycle single-use items and stimulating the creation of micro-enterprises, they could contribute to the uptake of eco-friendly alternatives to single-use plastics.[8]

Social awareness and education is also one of the ways to help contribute to issues similar to helping reducing packaging waste. Using the media gives quick access for the individuals or groups to spread information and awareness in regarding to letting the public know what is going on in the world and ways that others can contribute to assist in fixing problems of packaging wastes. Schools are also good for spreading the education with factual knowledge, possible outcomes for the increase of packaging waste, and provide ways to get individuals to give a helping hand in keeping our planet clean. Public awareness strategies can include a wide range of activities designed to persuade and educate.[8] These strategies may focus not only on the reuse and recycling of resources, but also on encouraging responsible use and minimization of waste generation and litter.[8]