Enzyme that adds phosphate groups to other proteins 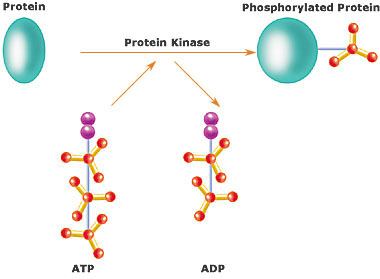 A protein kinase is a kinase which selectively modifies other proteins by covalently adding phosphates to them (phosphorylation) as opposed to kinases which modify lipids, carbohydrates, or other molecules. Phosphorylation usually results in a functional change of the target protein (substrate) by changing enzyme activity, cellular location, or association with other proteins. The human genome contains about 500 protein kinase genes and they constitute about 2% of all human genes.[1] There are two main types of protein kinase. The great majority are serine/threonine kinases, which phosphorylate the hydroxyl groups of serines and threonines in their targets and most of the others are tyrosine kinases, although additional types exist.[2] Protein kinases are also found in bacteria and plants. Up to 30% of all human proteins may be modified by kinase activity, and kinases are known to regulate the majority of cellular pathways, especially those involved in signal transduction.

The chemical activity of a kinase involves removing a phosphate group from ATP and covalently attaching it to one of three amino acids that have a free hydroxyl group. Most kinases act on both serine and threonine, others act on tyrosine, and a number (dual-specificity kinases) act on all three.[3] There are also protein kinases that phosphorylate other amino acids, including histidine kinases that phosphorylate histidine residues.[4]

Eukaryotic protein kinases are enzymes that belong to a very extensive family of proteins that share a conserved catalytic core.[5][6][7][8] The structures of over 280 human protein kinases have been determined.[9]

Tyrosine-specific protein kinases (EC 2.7.10.1 and EC 2.7.10.2) phosphorylate tyrosine amino acid residues, and like serine/threonine-specific kinases are used in signal transduction. They act primarily as growth factor receptors and in downstream signaling from growth factors.[11] Some examples include:

These kinases consist of extracellular domains, a transmembrane spanning alpha helix, and an intracellular tyrosine kinase domain protruding into the cytoplasm. They play important roles in regulating cell division, cellular differentiation, and morphogenesis. More than 50 receptor tyrosine kinases are known in mammals.

The extracellular domains serve as the ligand-binding part of the molecule, often inducing the domains to form homo- or heterodimers. The transmembrane element is a single α helix. The intracellular or cytoplasmic Protein kinase domain is responsible for the (highly conserved) kinase activity, as well as several regulatory functions.

The active tyrosine kinase phosphorylates specific target proteins, which are often enzymes themselves. An important target is the ras protein signal-transduction chain.

Some kinases have dual-specificity kinase activities. For example, MEK (MAPKK), which is involved in the MAP kinase cascade, is a both a serine/threonine and tyrosine kinase.

Histidine kinases are structurally distinct from most other protein kinases and are found mostly in prokaryotes as part of two-component signal transduction mechanisms. A phosphate group from ATP is first added to a histidine residue within the kinase, and later transferred to an aspartate residue on a 'receiver domain' on a different protein, or sometimes on the kinase itself. The aspartyl phosphate residue is then active in signaling.

Histidine kinases are found widely in prokaryotes, as well as in plants, fungi and eukaryotes. The pyruvate dehydrogenase family of kinases in animals is structurally related to histidine kinases, but instead phosphorylate serine residues, and probably do not use a phospho-histidine intermediate.

Deregulated kinase activity is a frequent cause of disease, in particular cancer, wherein kinases regulate many aspects that control cell growth, movement and death. Drugs that inhibit specific kinases are being developed to treat several diseases, and some are currently in clinical use, including Gleevec (imatinib) and Iressa (gefitinib).

Drug developments for kinase inhibitors are started from kinase assays, the lead compounds are usually profiled for specificity before moving into further tests. Many profiling services are available from fluorescent-based assays to radioisotope based detections, and competition binding assays.