Budget reconciliation is a special parliamentary procedure of the United States Congress set up to expedite the passage of certain budgetary legislation in the United States Senate. The procedure overrides the filibuster rules in the Senate, which may otherwise require a 60-vote supermajority for passage by the Senate. Bills described as reconciliation bills can pass the Senate by a simple majority of 51 votes or 50 votes plus the Vice President's as the tie-breaker. The reconciliation procedure also applies to the House of Representatives, but it has minor significance there, as the rules of the House of Representatives do not have a de facto supermajority requirement.[1] Due to greater polarization, gridlock, and filibustering in the Senate in recent years, budget reconciliation has come to play an important role in how the United States Congress legislates.[2]

In April 2021, the Senate Parliamentarian—an in-house rules expert—determined that the Senate can pass two budget reconciliation bills in 2021: one focused on fiscal year 2021 and one focused on fiscal year 2022. In addition, the Senate can pass additional budget reconciliation bills by describing them as a revised budget resolution that contains budget reconciliation instructions.[4] However, the Parliamentarian later clarified that the “auto-discharge” rule that allows a budget resolution to bypass a Budget Committee vote and be brought directly to the Senate floor does not apply to a revised budget resolution.[5] As a result of this ruling, a revised budget resolution would need to be approved by a majority vote of the Budget Committee before proceeding to the Senate floor, or deadlocked with a tied vote and then brought to the Senate floor via a motion to discharge. In a 50-50 Senate where committees are evenly divided between parties, this has the functional effect of requiring at least one member of the minority party on the Budget Committee to be present in order to provide a quorum for a vote. Considering the inherently partisan nature of reconciliation legislation, it is highly unlikely that a member of the minority party will cooperate with the majority by providing a quorum on the Committee, thus practically limiting the majority of a 50-50 tied Senate to one reconciliation bill per fiscal year.

Reconciliation is an optional part of the annual congressional budgetary process.[6] Typically, the reconciliation process begins when the president submits a budget to Congress early in the calendar year. In response, each chamber of Congress begins a parallel budget process, starting in the Senate Budget Committee and the House Budget Committee.[7] Each budget committee proposes a budget resolution setting spending targets for the upcoming fiscal year; in order to begin the reconciliation process, each house of Congress must pass identical budget resolutions that contain reconciliation instructions.[8] Other committees then approve bills that meet the spending targets proposed by their respective budget committees, and these individual bills are consolidated into a single omnibus bill. Each house of Congress then begins consideration of their respective omnibus bills under their respective rules of debate.[7]

Though the reconciliation process allows a bill to bypass the filibuster in the Senate, it does not affect other basic requirements for the passage of a bill, which are laid out in the Constitution's Presentment Clause. The House and Senate still must pass an identical bill and present that bill to the president. The president can sign the bill into law or veto it, and Congress can override the president's veto with a two-thirds majority vote in both houses of Congress.

The Byrd Rule, named for Senator Robert Byrd, was adopted in 1985 and amended in 1990.[13] The Byrd Rule defines a provision to be "extraneous"—and therefore ineligible for reconciliation—in six cases:[3]

The Byrd Rule does not prevent the inclusion of extraneous provisions, but relies on objecting senators to remove provisions by raising procedural objections.[15] Any senator may raise a procedural objection to a provision believed to be extraneous, which will then be ruled on by the presiding officer, customarily on the advice of the Senate parliamentarian: a vote of 60 senators is required to overturn their ruling. While the vice president (as president of the Senate) can overrule the parliamentarian, this has not been done since 1975.[16]

In 2001, Senate Majority Leader Trent Lott fired Parliamentarian Robert Dove after bipartisan dissatisfaction with his rulings, and replaced him with the previous Democratic appointee, Alan Frumin.[17]

Other restrictions have also been applied to reconciliation. For example, from 2007 to 2011, Congress adopted a rule preventing reconciliation from being used to increase deficits.[19]

Due to growing concerns over deficits and presidential control of the budget process, many members of Congress sought to reform the congressional budgetary process in the early 1970s. Charles Schultze, a former Director of the Bureau of the Budget, suggested a new process in which Congress would exercise greater control of the budget process by setting overall spending targets. Schultze proposed that Congress create a new type of legislation, the "final budget reconciliation bill," to ensure that the various budget-related bills passed by each congressional committee collectively fell within the overall spending targets passed by Congress. Schultze's ideas were adopted by Congress with the passage of the Congressional Budget Act of 1974, which established the reconciliation process, the Congressional Budget Office, and standing budget committees in the House and Senate.[20] Under the original design of the Budget Act, reconciliation was expected to apply to revenue and spending within a single fiscal year.[21]

Although reconciliation was originally understood to be for the purpose of either reducing deficits or increasing surpluses, the language of the 1974 act refers only to "changes" in revenue and spending amounts, not specifically to increases or decreases. Former Parliamentarian of the Senate Robert Dove noted that in 1975 Senator Russell Long convinced the Parliamentarian to protect a tax cut bill.[22] However, that bill was vetoed by President Gerald Ford. During the late 1970s, the process of reconciliation was largely ignored, in part because reconciliation could only be used during a brief window. In 1980, Congress amended the reconciliation process, allowing it to be used at the start of the budget process. Later that year, President Jimmy Carter signed the first budget bill passed using the reconciliation process; the bill contained about $8 billion in budget cuts.[23] 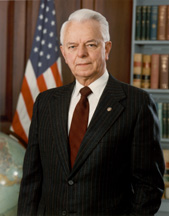 During the presidency of George H. W. Bush, it was used to pass the Omnibus Budget Reconciliation Act of 1990, which reduced federal spending and increased federal revenue.[26]

Upon taking office in 2001, Republican President George W. Bush sought the passage of major tax cuts, but his party controlled only a narrow majority in the Senate. To avoid a filibuster, Bush and his congressional allies used reconciliation to pass the Economic Growth and Tax Relief Reconciliation Act of 2001 and the Jobs and Growth Tax Relief Reconciliation Act of 2003, two major tax cut bills that reduced federal revenues.[28] To comply with the Byrd Rule, the tax cuts contained sunset provisions, meaning that, absent further legislation, tax rates would return to their pre-2001 levels in 2011.[29] Portions of the Bush tax cuts were made permanent through the American Taxpayer Relief Act of 2012, though some of the tax cuts for high earners were not extended.[30]

Democrats won control of the presidency and increased their control over Congress in the 2008 elections, and newly-inaugurated President Barack Obama and his congressional allies focused on passing a major healthcare reform bill in the 111th Congress. The Senate passed a major healthcare bill in late 2009 without using the reconciliation process; because Democrats had a 60-seat super-majority in the Senate, they were able to defeat Republican attempts to block the bill via the filibuster. While the House continued to debate its own healthcare bill, Democrats lost their 60-seat Senate super-majority following the death of Senator Ted Kennedy.[d] Following the loss of the Democratic super-majority in the Senate, House Democrats agreed to pass the Senate bill, while Senate Democrats agreed to use the reconciliation process to pass a second bill that would make various adjustments to the first bill.[32] The original Senate bill was passed by the House and signed into law by President Obama as the Patient Protection and Affordable Care Act (ACA). Subsequently, the House and Senate used reconciliation to pass the Health Care and Education Reconciliation Act of 2010, which contained several alterations to the ACA.[31] In 2016, Republicans passed a reconciliation bill to repeal parts of the ACA, but it was vetoed by President Obama.[33][34]

After gaining control of Congress and the presidency in the 2016 elections, Republicans sought to partially repeal the ACA and pass a major tax cut bill in the 115th United States Congress. As the party lacked a 60-vote super-majority in the Senate, they sought to implement both policies through separate reconciliation bills, with the healthcare bill passed using the reconciliation process for fiscal year 2017 and the tax cut bill passed using the reconciliation process for fiscal year 2018.[35] Republicans were unable to pass their healthcare bill, the American Health Care Act of 2017, because three Senate Republicans and all Senate Democrats voted against it, preventing the bill from gaining majority support in the Senate.[36] With the defeat of their healthcare bill, congressional Republicans changed their focus to a separate reconciliation bill that would cut taxes.[37] Both houses of Congress passed a tax cut bill in late 2017, though the Byrd Rule required the stripping of some provisions deemed extraneous.[38] After both houses of Congress passed an identical tax cut bill, President Trump signed the Tax Cuts and Jobs Act of 2017 into law in December 2017.[39] Because of Byrd Rule restrictions, the individual tax cuts contained in the Tax Cuts and Jobs Act of 2017 will expire in 2026 barring further legislative action.[40]

The American Rescue Plan was a $1.9 trillion economic stimulus package proposed by President Joe Biden to speed up the United States' recovery from the economic and health effects of the COVID-19 pandemic and the ongoing recession. He planned to pass it as one of his first bills into law through the 117th Congress.[41] First proposed on January 14, 2021, the package built upon many of the measures in the CARES Act from March 2020 and in the Consolidated Appropriations Act, 2021 from December.[42][43] The Parliamentarian of the United States Senate ruled on February 21 that a provision calling for a $15 minimum wage increase in the American Rescue Plan could not be considered under Reconciliation due to the Byrd Rule.[44] The bill was signed into law on March 11, 2021.[45]

The following bills have been enacted into law using reconciliation:[46]

Since 1980, four reconciliation bills have passed Congress, but were vetoed by the president:[47]