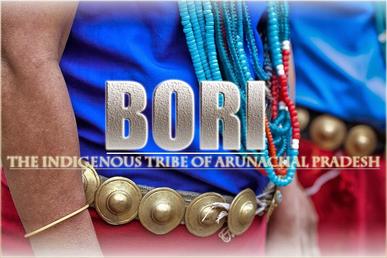 The Bori are an indigenous tribe of the Adi people living in the districts of East Siang, Upper Siang, Siang and West Siang in the Indian state of Arunachal Pradesh.

The Bori constitute a group of people inhabiting in the central portion of Siyom Valley and a major portion of the Sike Valley between Mega in the South and Gasheng in the north of Siang District. Of the 13 villages over which the Bori population is spread, Gate, Gauteng, Gaming, Payum, Yio, Molo, Dupu, Cheying, Row, Bogu, Mega, Pame and Reying. Payum as its headquarters.

Gate, Gasheng and Payum are located along the right bank of Sike and Gaming on its left bank. The area extends over 695 km2 (268 sq mi). Comparatively, it forms a small fraction, about 3.9 percent area of the district. The population represents approximately 4.3 percent of the entire population of the district.

The Adi Bori tribe are mostly found in Payum circle. In Bori villages, a leader styled Gam burah or Gao Burah moderates the council of the village. The head of the council is chosen by unanimous decision by the people of the council. To solve a village problem, the villagers get together in the village kebang in the presence of the council head. Bori people practice rice cultivation, and it is considered the main staple food. They practice hunting and trapping as well. Bori people raise mithuns, chickens, and pigs. Domestic vegetables are also cultivated. Their lifestyle is similar to the other tribes of the Siang district.

The language spoken by this group is a Sino-Tibetan language known as Bori or Adi. It is spoken with major variations among all the Bori-Adi subgroups.

The Adi Bori celebrate their own festival known as Donggin. In the Adi language, Donggin translates to "spring season". The Tribal people welcome spring by celebrating Donggin from 2 February to 5 February every year. They celebrate this festival for good harvesting as well. In this festival, they sacrifice mithuns, pigs and chickens to Ane Donggin for health & prosperity.[1]