The Tripuri (also known as Tipra, Tripura ,Tiprasa, Twipra) are an ethnic group originating in the Indian state of Tripura. They are the original inhabitants of the Twipra/Tripura Kingdom in North-East India and Bangladesh. The Tripuri people through the Manikya dynasty[3] ruled the Kingdom of Tripura for many years until the kingdom joined the Indian Union on 15 October 1949. 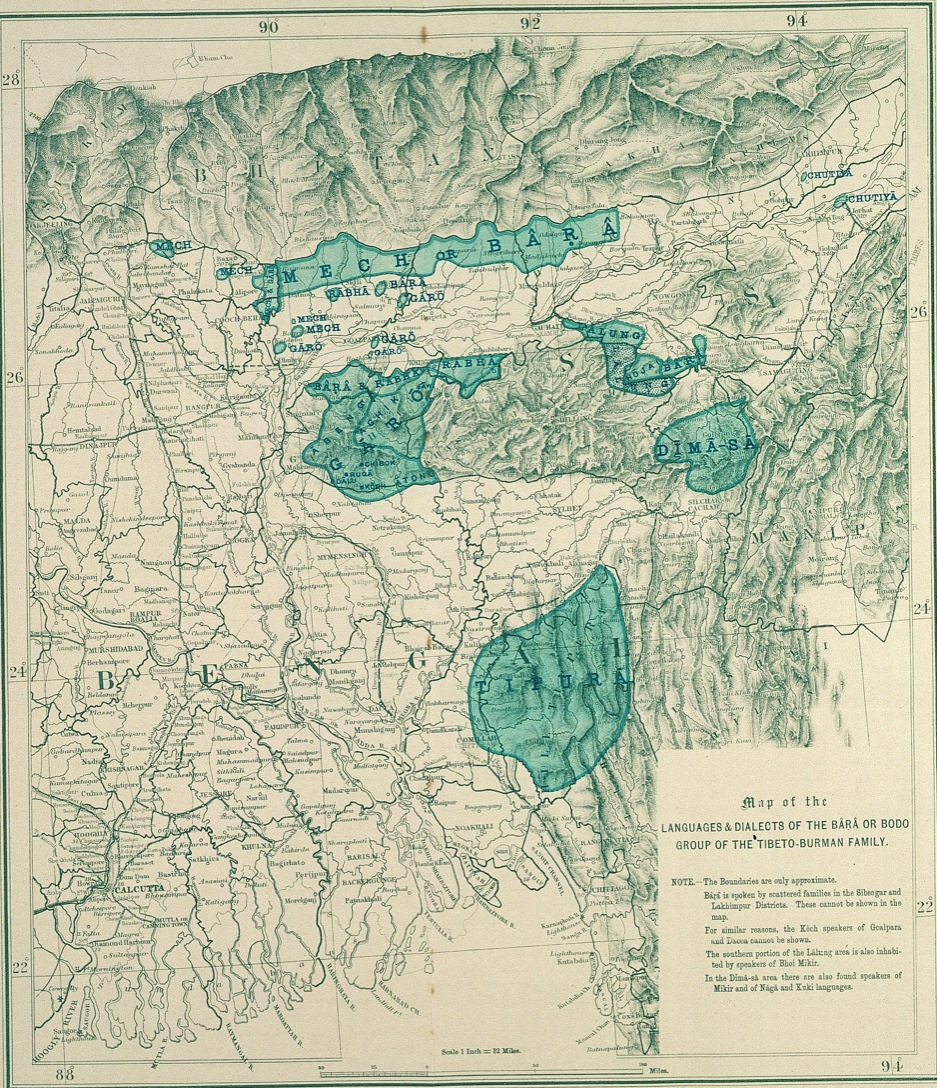 Distribution of Tipra, as reported in the Language Survey of India 1903

Tripuris are the native people of Tripura having its own unique and distinct rich culture, tradition, and history. They were able to expand their influence as far south as Chittagong Division, as far west as Comilla and Noakhali (known during the British period as 'plains Tipperah')and as far north as Sylhet Division (all in present Bangladesh). Chittagong Hill Tracts was the part of Tipperah Kingdom till British took control of the Indian subcontinent. In the year 1512, the Tipperas were at the height of their supremacy when they defeated the Mughals. The ruling dynasty passed through several periods of history and ruled Tripura for several centuries until the 18th century, after which Plain Tippera became a colony of Britain and Hill Tippera remained an Independent Princely state. On 14 October 1949, Hill Tippera was merged into the newly independent India as Tripura State.

The Tripuri people speak Kokborok (also known as Tripuri), a Tibeto-Burman language. Tripuri is the official language of Tripura, India. There are estimated to be more than one million speakers of the dialects of Tripuri in Tripura, and additional speakers in Mizoram and Assam in India, as well as Sylhet and the Chittagong Hill Tracts in Bangladesh. It is also spoken in Feni.

There are three main dialects of Tripuri, though the central dialect of the royal family, Debbarma (Puratan Tripur), is a prestige dialect understood by everyone. It is the standard for teaching and literature. It is taught as the medium of instruction up to class fifth and as subject up to graduate level.

Historically, Tripuri was written in native Tripuri script known as Koloma, the earliest known writing in Tripuri dates from the 1st century AD, and was written in Koloma. The script was replaced by an alphabet based on the Eastern Nagari script. Currently the revival of ancient Koloma script is in process.

Some of the most notable Tripuri historical literary works, written by court scholars, include:

Religion among the Tripuri

Minority of Uchai clan in Tripuri are Buddhist.[5]

A minority of Tripuris, particularly in Bangladesh but also India,[6] have adopted Islam as their religion and have been subject to violence by some Tripuri Christians. On 18 June 2021,[7] a Tripuri imam and farmer called Omar Faruq Tripura (formerly known as Bennichand Tripura) of Tulajhiri Aga Tripurapara was shot whilst heading home from Isha prayers at a makeshift mosque.[8][9] Five out of the 38 families in this Tripurapara are Muslims and the rest are Christians.[10]

The main Tripuri clans are:

The Tripuri people consist of clans, each with its own elementary social and administrative organisation starting from the village level and up to the chieftainship of the whole community.[11]

Tripura girls in their traditional attire

These indigenous communities enjoy their traditional freedom based on the concept of self-determination. The relation between the king and the subject communities was as Maharaja (king) of Tripura-Missip or liaison officer Roy or headman of the community – Sardar the chief of the village – the individual. Earlier, only the Debbarma or Tipra ethnic group was included in the Tripuri Kshatriya group. Later, the Raja included other groups like Reang, Jamatia and Noatia as well, in an attempt to foster a sense of kindness among the people under his region.[12]

The Tripuri people have a rich historical, social, and cultural heritage which is totally distinct from that of the mainland Indians. Their distinctive culture – as reflected in their dance, music, festivals, management of community affairs, dress and food habits – has a strong base. Kokborok, the lingua franca of the 12 largest linguistic groups of the indigenous Tripuris and other dialects spoken in Tripura are of the Tibeto-Burman group and distinct from those spoken in India. There is no influence from those spoken by other peoples in the north-eastern region.

The Tripuris follow a traditional luni-solar calendar Tripurabda, which has 12 months and a 7-day week, like the Gregorian calendar.

The Tripura Era's New Year is on the 1st of Vaishakh which corresponds to 14 or 15 of April of Common_Era, depending on whether that year is a Leap year or not. The months are named in pan Indian months, time since its inception 1419 years back by Tripuri king Hamtor pha alias Himti pha alias Jujharu pha in 512 Saka Era.

"Pait" one of the ancient Tripuri brain game

Like many parts of the world the Tripuri has traditional sports. It is common in almost all the clans of Tripuri. They are called thwngmung in Tripuri.