Following acclaimed participation in many battles during both the Second Sino–Japanese War and the Chinese Civil War, Chen served as Mayor and Military Governor of Chongqing from 1949 to 1950 and Central Commander of PLA Artillery from 1950 to 1959. He then commanded the Shenyang Military Region (1959–73) and, crucially, the Beijing Military Region (1973–80). Additionally, Chen was a full member of the Politburo (1969–80) and Vice Premier (1975–80).[2]

After Mao's death, Chen was one of Hua Guofeng's most significant supporters, along with Wang Dongxing and Li Xiannian. When Deng Xiaoping gradually rose to power, Chen lost his powerful posts, but was allowed to retire without harm.

Chen was born in Hong'an County, Hubei, in 1915. He became a soldier in the Chinese Red Army in 1929, at age 14, and joined the Communist Youth League a year later.[3] Following military training at the Red Army School, he served in the 4th Front Army as a political instructor and communications man, moving up the ranks to regiment political commissar in 1934. His unit, which was led by Zhang Guotao, Xu Xiangqian and Li Xiannian, included such future leaders as Qin Jiwei. They fought Sichuan warlords on the western leg of the Long March.[4] At the close of the Long March, Chen – like his colleagues Xu Shiyou and Yu Qiuli – would find himself on the wrong side of the Mao Zedong-Zhang Guotao dispute, and badly battered by Muslim Hui cavalry and warlord armies. After the fighting, Chen emerged as a division commander and reached Yan'an in late 1935.[5] He was assigned to the 129th Division of Eighth Route Army, which later became the core of the 2nd Field Army of Liu Bocheng and Deng Xiaoping. 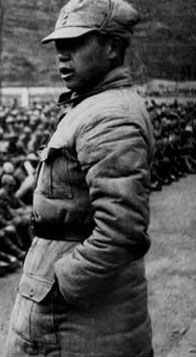 In the summer of 1940, Chen’s unit participated in the victorious Hundred Regiments Campaign near Taiyuan, and by September Chen had succeeded the reassigned Xu Shiyou as 385th Brigade Commander; his political commissar at the time was future Public Security Minister Xie Fuzhi, later to become another powerful leftist.[8]

During the Chinese Civil War, Chen was commander of the 3rd Army and distinguished himself in the Huai–Hai and Yangtze campaigns, which were both crushing victories for the Communists. In the spring of 1949, after the fall of Nanjing, Chen's forces moved into Zhejiang, and took part in the capture of Hangzhou and Shanghai, and then of the Southwest.[9]

From 1949 to 1950, he was appointed Party First Secretary, Mayor and Military Governor of Chongqing, as well as a member of the Southwest Military and Political Committee, under the leadership of Deng Xiaoping, He Long and Liu Bocheng.[10]

From 1950 to 1959, Chen served as Central Commander of the entire PLA Artillery, and President of the Artillery Academy. He worked very closely with Soviet advisers and, like the Soviet Red Army, the PLA would acquire a preference for heavy artillery bombardments. Chen especially distinguished himself during the First Taiwan Strait Crisis, with the PLA capturing the Yijiangshan and Dachen islands. As commander of the artillery, he employed the former Qing Dynasty Manchu imperial prince Zaitao, as a special adviser.[11]

From 1959 to 1973, Chen Xilian was in Manchuria, serving as commander of the Shenyang Military Region. He was actively involved in the Sino–Soviet border conflict, commanding the artillery assault on Zhenbao Island.

A beneficiary of the Cultural Revolution, he became a full member of the Politburo in 1969, and Party Secretary of Liaoning Province in 1971.[12]

Height of power and subsequent fall

In December 1973, Chen Xilian became Commander of the Beijing Military Region, while remaining a full member of the Politburo.[13] In 1975 he was also named a Vice Premier. During Mao Zedong's last years, Chen was one of his most trusted lieutenants, and Mao even allowed Chen to unofficially take over daily control of the Central Military Commission, something that offended Marshal Ye Jianying, who was previously tasked with this sensitive assignment.

In October 1976 (following the death of Mao in September) Chen was given credit by many for managing the arrest of the Gang of Four, but other sources instead give full credit to Wang Dongxing; in any case, the two were close allies, and both agreed in supporting Hua Guofeng, Mao's designated successor.[14][15]

Hua Guofeng gradually saw power slip from his hands, and Deng Xiaoping's re-emergence spelled the end of Chen's military and political power.[16] He was purged in February 1980 along with three other beneficiaries of the Cultural Revolution: Wu De, Ji Dengkui and Wang Dongxing. Together they were labelled the "Little Gang of Four" by Deng and his followers. Nevertheless, Deng did not harm Chen any further, and allowed him to retain all the privileges of a retired general.

Chen went on to enjoy a comfortable retirement, and died in Beijing in 1999, at the age of 84.