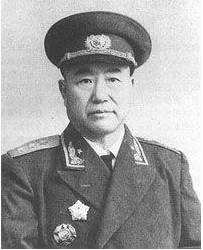 Dong was born in Hejin, Shanxi Province. He attended the military study group founded by Yan Xishan in 1919. He joined the army in 1924. He first was recruited in Liu Zhenghua's army, and later joined National People's Revolution Army, and participated in North Expedition. After that, he joined Fu Zuoyi's army. Since 918, he actively fought Japanese, and such battles in the Great Wall, Bailingmiao established his reputation. He was promoted to lieutenant general and head of 102 division in 1937, and fought in Pingxingguan battle. In 1946, he became the governor and commander of Suiyuan Province, and later became vice commander of northwest military and political official bureau. On September 19, 1949, he announced peaceful liberation of Suiyuan Province. He participated in Korean War, and was the commander of 23 army group of Chinese People's Volunteer Army. He became head of 69 army of PLA in 1953.