Eleanor Holmes Norton (born June 13, 1937) is an American lawyer and politician serving as a delegate to the United States House of Representatives, representing the District of Columbia since 1991. She is a member of the Democratic Party.

Eleanor K. Holmes was born in Washington, D.C., the daughter of Vela (née Lynch), a schoolteacher, and Coleman Holmes, a civil servant. While a student at Dunbar High School she was elected junior class president and was a member of the National Honor Society.[1] She attended Antioch College (B.A. 1960), Yale University (M.A. in American Studies 1963)[2] and Yale Law School (LL.B. 1964).[3]

While in college and graduate school, she was active in the civil rights movement and an organizer for the Student Nonviolent Coordinating Committee. By the time she graduated from Antioch, she had already been arrested for organizing and participating in sit-ins in Washington, D.C., Maryland, and Ohio. While in law school, she traveled to Mississippi for the Mississippi Freedom Summer and worked with civil rights stalwarts such as Medgar Evers. Her first encounter with a recently released but physically beaten Fannie Lou Hamer forced her to bear witness to the intensity of violence and Jim Crow repression in the South.[4] Her time with the SNCC inspired her lifelong commitment to social activism and her budding sense of feminism. She contributed the piece "For Sadie and Maud" to the 1970 anthology Sisterhood is Powerful: An Anthology of Writings From The Women's Liberation Movement, edited by Robin Morgan.[5][6] Norton was on the founding advisory board of the Women's Rights Law Reporter (founded 1970), the first legal periodical in the United States to focus exclusively on the field of women's rights law. In the early 1970s, Norton was a signer of the Black Woman's Manifesto, a classic document of the Black feminist movement.[7] 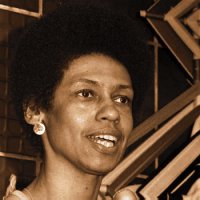 Eleanor Holmes Norton as chair of the EEOC

Upon graduation from law school, she worked as a law clerk to Federal District Court Judge A. Leon Higginbotham, Jr.[2] In 1965, she became the assistant legal director of the American Civil Liberties Union, a position she held until 1970.[8] In 1970, Norton represented sixty female employees of Newsweek who had filed a claim with the Equal Employment Opportunity Commission (EEOC) that Newsweek had a policy of allowing only men to be reporters.[9] The women won, and Newsweek agreed to allow women to be reporters.[9]

Holmes Norton specialized in freedom of speech cases, and her work included winning a Supreme Court case on behalf of the National States' Rights Party,[10] a victory she put into perspective in an interview with one of the District of Columbia Bar's website editors: "I defended the First Amendment, and you seldom get to defend the First Amendment by defending people you like ... You don't know whether the First Amendment is alive and well until it is tested by people with despicable ideas. And I loved the idea of looking a racist in the face—remember this was a time when racism was much more alive and well than it is today—and saying, 'I am your lawyer, sir, what are you going to do about that?'"[2] She worked as an adjunct assistant professor at New York University Law School from 1970 to 1971.[11] In 1970, Mayor John Lindsay appointed her as the head of the New York City Human Rights Commission, and she held the first hearings in the country on discrimination against women.[12] Prominent feminists from throughout the country came to New York City to testify, while Norton used the platform as a means of raising public awareness about the application of the Civil Rights Act of 1964 to women and sex discrimination.[4]

President Jimmy Carter appointed Holmes Norton as the chair of the EEOC in 1977; she became the first female head of the agency.[8] Norton released the EEOC's first set of regulations outlining what constituted sexual harassment and declaring that sexual harassment was indeed a form of sexual discrimination that violated federal civil rights laws.[13][14]

She has also served as a senior fellow of the Urban Institute.[15] Norton became a professor at Georgetown University Law Center in 1982.[8] During this time, she was a vocal anti-apartheid activist in the U.S., and was a part of the Free South Africa Movement.

In 1990, Norton, along with 15 other African American women and one man, formed African-American Women for Reproductive Freedom.[16]

She contributed the piece "Notes of a Feminist Long Distance Runner" to the 2003 anthology Sisterhood Is Forever: The Women's Anthology for a New Millennium, edited by Robin Morgan.[17]

She received a Foremother Award for her lifetime of accomplishments from the National Research Center for Women & Families in 2011.[18] Norton was elected in 1990 as a Democratic delegate to the House of Representatives. She defeated city council member Betty Ann Kane in the primary despite the last-minute revelation that Norton and her husband, both lawyers, had failed to file D.C. income tax returns between 1982 and 1989.[19] The Nortons paid over $80,000 in back taxes and fines.[20][21] Her campaign manager was Donna Brazile.[21] The delegate position was open because Del. Walter Fauntroy was running for mayor rather than seeking reelection.[22] Norton received 39 percent of the vote in the Democratic primary election,[23] and 59 percent of the vote in the general election.[24] Norton took office on January 3, 1991, and has been reelected every two years since.[22]

Delegates to Congress are entitled to sit in the House of Representatives and vote in committee, and to offer amendments in the Committee of the Whole, but are not allowed to take part in legislative floor votes.[25][26] The district and four U.S. territories—Guam, American Samoa, the Northern Mariana Islands, and the U.S. Virgin Islands—send delegates to Congress; the Resident Commissioner of Puerto Rico has the same rights as delegates.[25]

William Thomas and the White House Peace Vigil inspired Norton to introduce the Nuclear Disarmament and Economic Conversion Act, which would require the United States to disable and dismantle its nuclear weapons at such time as all other nations possessing nuclear weapons do likewise.[27] Norton has been introducing a version of the bill since 1994.[27]

The legislation proposed in 2009 did not grant Norton the right to vote in the 111th Congress, as she would have had to remain in her elected office of delegate for the duration of her two-year term.[28]

In September 2010, the national press criticized Norton after the release of a voice message in which she solicited campaign funds from a lobbyist representing a project that she oversaw. Norton countered that the message was typical of appeals made by all members of Congress and that the call was made from campaign offices not paid for by taxpayers.[29] In March 2012, the public radio series This American Life featured the voicemail message at the start of a program on lobbying titled "Take the Money and Run for Office".[30]

In May 2012, Norton was blocked from testifying on an anti-abortion bill in her district—the second time she has been blocked from speaking about abortion. She insisted that it was a denial of a common courtesy. Representative Jerrold Nadler supported Norton's protest, saying "Never in my 20 years as a member of Congress have I seen a colleague treated so contemptuously."[31][32][33]

In August 2014, after the D.C. Board of Elections voted to put a question about marijuana legalization on the ballot in November 2014, Norton vowed to defend against any congressional attempt to stop the district from voting on the issue and to, if approved, fight any attempt to prevent implementation.[34]

Norton with members of the Council of the District of Columbia in 2007.

On July 27, 2006, Norton appeared on the "Better Know a District" segment of Comedy Central's The Colbert Report, in which she spiritedly defended the District of Columbia's claim to being a part of the United States.[52] She also appeared on the joint The Colbert Report/The Daily Show "Midterm Midtacular" special on November 7, 2006.[53] Norton gave further interviews to Stephen Colbert on March 22, 2007,[54] and April 24, 2007, on the subject of representation in the District of Columbia.[55] On February 12, 2008, Colbert and Norton discussed her status as a superdelegate as well as her support of Barack Obama for president.[56] She appeared once again on February 11, 2009, to discuss D.C. representation and promised Colbert that she would make him an honorary citizen of Washington, D.C., and give him a key to the city, if D.C. citizens were given representation. Colbert in turn gave Norton a "TV promise" that he would be there should that happen.[57] Norton made a further appearance on Colbert's show on June 25, 2014, where she discussed the impact that African-American Democrats had on incumbent Thad Cochran's primary defeat of Chris McDaniel, a Tea Party candidate, as well as Colbert's final episode among a cadre of past guests.[58]

On June 27, 2008, Norton appeared on Democracy Now! to discuss the Supreme Court's ruling in District of Columbia v. Heller,[59] which she strongly opposed. On December 5, 2014, Norton appeared on Hannity to discuss the shooting death of Michael Brown in Ferguson, Missouri, on which she admitted she did not read the evidence of the case, but criticized the racial profiling of young African Americans.[60][61]

On October 2, 2014, ABC News reported that Holmes Norton, discussing her co-sponsorship of a bill aimed at changing the National Football League's tax-exempt status, stated: "The NFL greed is so widespread that they've chosen to operate as a tax-exempt organization. So we want to take that choice away from them unless, and until, they decide not to profit from a name that has now officially been declared a racial slur."[62] In essence, Holmes Norton's position was that until the NFL forced the Washington Redskins owner (Daniel Marc Snyder) to change the team name she would support legislation that would change the NFL's tax status thereby costing the league money.[63]

Norton at Capital Pride in 2006

She is featured in the feminist history film She's Beautiful When She's Angry.[66][67]