Names are given below in the Uzbek language, although numerous variations of the transliterations of each name exist. The regions in turn are divided into 169 districts (tumanlar, singular tuman). 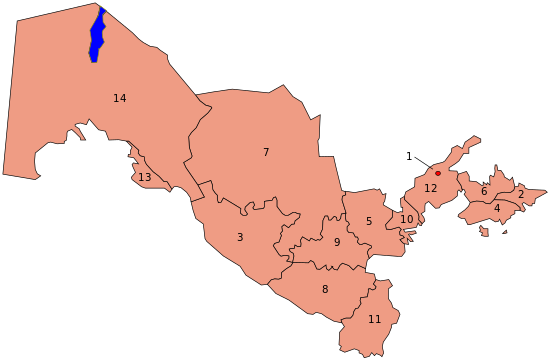 Uzbekistan has a Tajikistan enclave, the village of Sarvan, which includes a narrow, long strip of land about 15 km (9.3 mi) long and 1 km (0.62 mi) wide, along the road from Angren to Kokand.

The Kyrgyz village of Barak (population 627) lies 15 km north of Osh. In August 1999, the area around Barak was occupied by Uzbekistan, cutting it off from Kyrgyz territory. Uzbek forces dug up and blockaded the road to Ak-Tash[3] while also allegedly seizing large areas of Kyrgyz land that had been loaned in the Soviet era but never returned.[4] They entrenched themselves within much of Kyrgyz border territory and refused to leave.[5] Barak became a de facto enclave only 1.5 km from the shifted main border.[6][7][8] (Map) In August 2018 Kyrgyz and Uzbek authorities agreed to a land swap that would eliminate the exclave. The exchange process may take up to two years.[9]