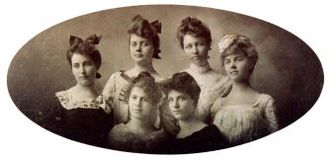 Delta Zeta has 170 collegiate chapters in the United States and Canada, and over 200 alumnae chapters in Canada, the United Kingdom and the United States. As of 2013, there are over 244,400 college and alumnae members, making it the third largest sorority in the nation (after Alpha Delta Pi and Chi Omega).[1][2] In 1954, the sorority adopted speech and hearing as its philanthropic cause, and is partnered with the Starkey Hearing Foundation and Gallaudet University. Throughout its history, it has absorbed several other smaller sororities and also opened its first Canadian chapter in 1992.

Delta Zeta is one of 26 national sororities which are members under the umbrella organization of the National Panhellenic Conference; the sorority joined the Conference in 1910. Two students dance outside the Delta Zeta house at the University of Texas at Arlington, 1978

Delta Zeta Sorority was founded at Miami University in Oxford, Ohio in 1902, the same year that the university first allowed female students.[3] Miami is dubbed the "Mother of Fraternities" because of the many prominent men's fraternities which were founded there.[1]

Six of the newly admitted women consulted university president Dr. Guy Potter Benton regarding the founding of the first sorority chapter.[3][4] Having been a leader in the Phi Delta Theta fraternity, he was familiar with the processes of a Greek organization and helped the women establish the first Delta Zeta chapter, the first sorority at the campus. Benton aided in preparation of the ritual, badge, and colors. For his contributions, he was named the 'Grand Patron'. The Delta Zeta Sorority was officially incorporated on October 24, 1902. The founding members were:

The women were harassed for wanting to form a sorority. In one account, someone stole the constitution out of the secretary's hand but Dr. Benton pursued the offender and retrieved the constitution.[citation needed]

The first National Assembly, with Lloyd as the national president, was held in 1907.[5]

In 1910, Delta Zeta published the first issue of its national magazine, The LAMP, now issued three times a year.[5] That same year, the sorority joined the National Panhellenic Conference.[6]

Throughout the middle of the century, Delta Zeta absorbed four other sororities: Beta Phi Alpha in 1941, Phi Omega Pi in 1946, Delta Sigma Epsilon in 1956, and Theta Upsilon in 1962; most of these sororities had previously absorbed other, smaller sororities as well.[7][8][1]

In 1992, Delta Zeta chartered its first Canadian chapter at the University of Windsor, marking the beginning of the sorority's international expansion.[5][1]

Delta Zeta's official flower is the pink Killarney rose, while the official stone is the diamond. The turtle is the official mascot. The Roman lamp is the official symbol.[9] The badge consists of a lamp on top of a winged Ionic column, all in gold, with a diamond set at the spout of the lamp and four pearls inset on the capital of the column.[10] The Greek letters are inscribed on the lamp. At its inception, the original badge did not include pearls, which were added a few years later.[5]

Delta Zeta is one of the first sororities to have had a Lilly Pulitzer print made with its symbols.[5]

The Delta Zeta Foundation is a not-for-profit entity within the organization that provides various scholarships for members of the sorority as well as funding leadership, philanthropy and education programs. There is a national philanthropic organization for active members of Delta Zeta known as the 1902 Loyalty Society, and members join by donating $19.02.[13]

The National Council of Delta Zeta is an alumnae board tasked with the governance of the organization.[14]

At the end of 2006, the Delta Chapter of Delta Zeta at DePauw University became enmeshed in a controversy that would eventually make national headlines and result in the chapter's closure.[31] The Delta Zeta national leadership was criticized after The New York Times published an article accusing the National office of moving certain members of the Delta Chapter at DePauw University to alumnae status based on their perceived attractiveness. Founded in 1909, the Delta chapter was the sorority's second oldest active chapter and its fourth oldest chapter overall (a "single letter" chapter). Despite its long history at DePauw, the Delta Zeta chapter struggled with declining membership and had acquired a negative reputation on campus. As a result, the Delta chapter members voted to request Delta Zeta Sorority to close the chapter due to falling numbers and lack of interest in recruitment. When notified of the chapter decision, Delta Zeta Sorority arranged a chapter membership review and chapter reorganization rather than close the chapter completely. Several of the members that were moved to alumnae status (and therefore required to move out of the Delta Zeta house at DePauw) argued that they were moved to alumnae status due to their perceived unattractiveness, weight, or ethnicity and contacted the media.[32]