Pi Delta Psi (ΠΔΨ) is an Asian American-interest cultural fraternity founded at Binghamton University on February 20, 1994.[1] As of 2020, the organization listed over 3,000 lifetime members spanning 30 undergraduate chapters and 1 alumni chapter.[2][3]

This organization is a member of the National APIDA Panhellenic Association (NAPA).[4] 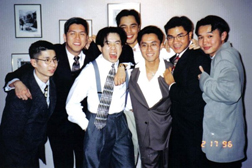 A year after its founding, Pi Delta Psi was officially incorporated in the State of New York on April 19, 1995. After five years, the fraternity had grown too large for the Pi Delta Psi National Council to maintain. Thus in 1999, it was decided by the National Council to restructure itself in an effort to grow in proportion to the fraternity's expansion rate, standardize chapters nationwide, and increase inter-chapter cohesion. The National Council was also renamed the "National Executive Board" during that period.

Pi Delta Psi and its members seek to bring about Asian-American unity by breaking down cultural barriers amongst Asian communities by upholding and/or instilling the fraternity's pillars: academic achievement, cultural awareness, righteousness, friendship, and loyalty. Pi Delta Psi's mission statement also advocates an increase in education and awareness of Asian cultures as a means of overcoming racism.[5] 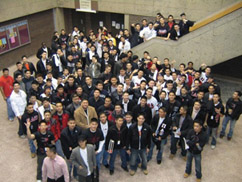 Brothers posing for a photo at Convention 3 at Rutgers University, Spring 2005.

Pi Delta Psi holds an annual National Winter Conference during the month of January each year. The Winter Conference is a daylong leadership retreat where the National Executive Board meets and discusses relevant fraternity issues with representatives from each undergraduate chapters. The event is typically held in the New York metropolitan area.

The National Summer Banquet is a formal dinner event for Pi Delta Psi members which is normally held near the location of the National Summer Conference. National announcements such as awards and scholarships are presented during this event.[6]

At the chapter level, each chapter is required to host a set number of cultural events on campus each year depending on the chapter's size; failure to achieve this annual criterion will result in the chapter losing its chapter status.[7][8][9] 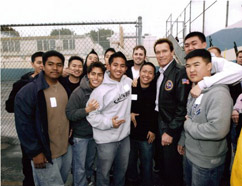 Brothers posing with California's then Governor Arnold Schwarzenegger during a philanthropy event.

The national philanthropy of Pi Delta Psi for 2009 was the March of Dimes, and fraternity is still an official team youth partner.[10]

Formerly, Pi Delta Psi's national philanthropy was the Big Brothers Big Sisters of America program. All chapters were expected to work closely with the Big Brothers program in their own campus community. At the Chapter level, each Chapter was required to participate in a set number of philanthropy events each year depending on the Chapter's size; failure to achieve this annual criteria resulted in the chapter having its status revoked.[8]

In December 2013, prospective member Chun Hsien "Michael" Deng died from brain trauma due to hazing during an unsanctioned pledge event at the Baruch College chapter. Deng, 18 was a recent graduate of The Bronx High School of Science.[11] Deng and four other pledges wore 30 lb. backpacks filled with sand while members of the fraternity tackled them during a ritual known as "The Glass Ceiling," which represented Asian American struggle in the United States. Despite Deng becoming immediately unconscious, his fraternity brothers failed to call for emergency help, instead attempting to cover up the incident.[12] Baruch College responded by permanently banning the fraternity from their campus.[13]

Andy Meng, the former National Executive President for Pi Delta Psi said in a statement the incident happened during "an unsanctioned event that was strictly prohibited by our organization." After investigating the incident,[14] the fraternity revoked its affiliation with the Baruch chapter. Baruch also banned the fraternity from ever returning.[13] In February, 2014, the death was ruled a homicide, and the Monroe County district attorney expects to file charges after the investigation.[15] Deng's parent's had filed a lawsuit against the fraternity, including Mr. Meng, who is the younger brother of U.S. representative Grace Meng.[16] When Deng lost consciousness his fraternity brothers called Andy Meng who allegedly told them to conceal any evidence of the fraternity before calling the authorities.[17] On September 14, 2015, charges were filed against 37 members, including five for third-degree murder.[18] Andrew Meng is facing charges of hazing, conspiracy and hindering apprehension.[19]

On January 8, 2018, four men were sentenced to jail time as a result of the hazing incident subsequent to guilty pleas to charges of voluntary manslaughter, hindering apprehension and other charges.[20] Additionally, a Pennsylvania stated judge banned the national fraternity from operating in the state for ten years.[21]