This article needs additional citations for verification. Please help improve this article by adding citations to reliable sources. Unsourced material may be challenged and removed.Find sources: "List of nicknames of United States Army divisions" – news · newspapers · books · scholar · JSTOR (March 2012) (Learn how and when to remove this template message)

Many Army divisions have over the years earned nicknames; some laudatory, some derogatory, but mostly colorful. Sometimes, the nicknames themselves have overshadowed the actual name of the division, e.g. the "Screaming Eagles" for the 101st Airborne Division.

An official special designation is a "nickname granted to a military organization" which has been authorized by the Center of Military History and recognized through a certificate signed by the Secretary of the Army.[1]

A division's nickname may derive from numerous sources:

Active divisions are listed in boldface; no distinction has been made between regular Army divisions and those of the Army Reserve or National Guard. The origin of the nickname is noted where possible. In some cases, the nickname was officially adopted by the division in question; this is indicated along with date of adoption (where known). Official status might also be inferred by the presence of the nickname on official distinctive unit insignia or in official military source materials. 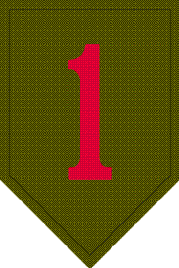 "The Big Red One" of the 1st Infantry Division.