pronunciation (help·info), born Jarnail Singh; 5 May 1916 – 25 December 1994[2]) was the seventh president of India, serving from 1982 to 1987, and the first Sikh to hold the office. Prior to his presidency, he was a politician with the Indian National Congress party, and had held several ministerial posts in the Union Cabinet, including that of Home Minister. He also served as the Chairman of the Non-Aligned Movement from 1983 to 1986.

His presidency was marked by Operation Blue Star, the assassination of Indira Gandhi, and the 1984 anti-Sikh riots.[3] He died of injuries in 1994, after a car accident.

He was born in Sandhwan, Faridkot district on 5 May 1916 to Kishan Singh and Mata Hind Kaur, a Sikh couple of a small village, Sandhvan, near Kot Kapura, in the princely state of Faridkot. Kishan Singh was the village carpenter. Additionally, he had his own small acreage to till. He was a devout Sikh and was known in the countryside for his simple and upright manner. Zail Singh was named Jarnail, meaning “General”, but as a young man, he changed his first name to Zail after being imprisoned several times for opposing the rule of the maharajah of Faridkot.[2] He was a Sikh by religion, was given the title of Giani, as he was educated and learned about Guru Granth Sahib at Shaheed Sikh Missionary College in Amritsar.[4]

In 1947, with the reorganisation of India along secular lines, he opposed Harindar Singh Brar, ruler of Faridkot State and was incarcerated and tortured for five years.[5] He was called on to be the Revenue Minister of the recently formed Patiala and East Punjab States Union, under Chief Minister Gian Singh Rarewala in 1949 and later became Minister of Agriculture in 1951. From 3 April 1956 to 10 March 1962, he was a member of the Rajya Sabha.[6]

Zail Singh was elected as a Congress Chief Minister of Punjab in 1972.[7][8] He arranged massive religious gatherings, started public functions with a traditional Sikh prayer, inaugurated a highway named after Guru Gobind Singh, and named a township after the Guru's son.[9] He created a lifelong pension scheme for the freedom fighters of the state. He repatriated the remains of Udham Singh from London, armaments and articles belonging to Guru Gobind Singh.[citation needed]

In 1980, Zail Singh was elected to the 7th Lok Sabha, and appointed to join Indira Gandhi's cabinet as Minister of Home Affairs.[3]

Zail Singh, President of India with Panthers Party founder Bhim Singh, at the Presidential Palace in New Delhi in the 1980s.

In 1982, he was unanimously nominated to serve as the President. Nonetheless, some in the media felt that the President had been chosen for being an Indira loyalist rather than an eminent person. "If my leader had said I should pick up a broom and be a sweeper, I would have done that. She chose me to be President," Singh was quoted to have said after his election.[10] He took the oath of office on 25 July 1982. He was the first Sikh to hold the office.

He served beside Gandhi and protocol dictated that he should be briefed every week by her on the affairs of the state. On 31 May 1984, day before Operation Blue Star, he met with Gandhi for more than an hour, but she omitted even sharing a word about her plan.[11] Following the operation he was pressured to resign from his post by Sikhs. He decided against resignation fearing to aggravate the situation on advice from Yogi Bhajan. He was subsequently called before the Akal Takhat to apologise and explain his inaction at the desecration of the Harimandir Sahib and killing of innocent Sikhs. Indira Gandhi was assassinated on 31 October in the same year, and he appointed her elder son Rajiv Gandhi as Prime Minister.[12]

Also, in 1986 he exercised the Pocket veto with respect to the Indian Post Office (Amendment) Bill, passed by Rajiv Gandhi, imposing restrictions on the freedom of press and hence, was widely criticised.

Zail Singh was awarded the Order of St. Thomas[13] (the highest honorary award conferred by the Indian Orthodox Church) by Catholicos of the East Baselios MarThoma Mathews I during the Catholicate Platinum jubilee celebratory meeting held at Kottayam Nehru Stadium on 12 September 1982.

Singh used a pocket veto to refuse assent to the "Post Office (Amendment) Bill" in 1986 to show his opposition to the bill. The bill was later withdrawn by the V. P. Singh Government in 1990.[14]

100th Birthday celebration of Zail Singh, led by then President of India Mukherjee at the Presidential Palace in New Delhi. 2016

On 29 November 1994, Zail Singh suffered multiple injuries following a motor accident near Kiratpur Sahib in Ropar district when a truck driving down the wrong side of the road hit the car he was travelling in.[15][16] Singh died in PGI, Chandigarh where he had been undergoing treatment on Christmas Day in 1994, aged 78.[17][18] The Government of India announced seven days of official mourning following his death.[18] He was cremated at the Raj Ghat Memorial in Delhi.[19] 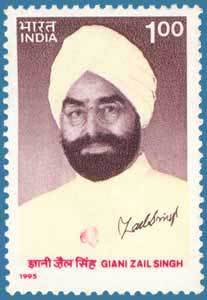 A commemorative postage stamp was issued by India's Department of Posts on the occasion of Singh's first death anniversary in 1995.[20][21]