KEZK-FM (102.5 MHz) is a commercial FM radio station licensed to St. Louis, Missouri. It broadcasts an adult contemporary radio format and is owned by Audacy, Inc.[1] From mid-November through the Christmas holiday, KEZK switches to an all-Christmas music format. The studios and offices are on Olive Street in Downtown St. Louis.[2]

KEZK has an effective radiated power (ERP) of 100,000 watts, the maximum for non-grandfathered FM stations, covering parts of Missouri and Illinois. The transmitter is in Resurrection Cemetery in Shrewsbury.[3] KEZK broadcasts using the HD radio hybrid format.[4] The HD2 digital subchannel a Christian Contemporary music format known as "The Spirit." The HD3 subchannel simulcasts News/Talk sister station KMOX (1120 AM).

The 102.5 frequency in St. Louis had originally been the home of listener-supported free form KDNA from 1969 to 1972. KDNA was a non-commercial station, supported by listener donations, yet it broadcast on a commercial frequency. In 1972, it relocated to the non-commercial part of the FM dial, and now is KDHX at 88.1 MHz.

Heftel Broadcasting paid for the frequency, and in June 1973, it put KEZK on the air.[5] KEZK carried a beautiful music format and its call sign reflected that format with the EZ call letters, referring to easy listening. It was among St. Louis' highest rated FM stations in the 1970s and 1980s. By the mid-1980s, however, listeners interested in the beautiful music format were beginning to age and most advertisers seek a younger audience. In response, KEZK began adding more vocals to its mostly instrumental playlist.

On January 1, 1991, KEZK completed the transition to a soft adult contemporary format, playing music mostly from the 1970s and 1980s as well as some current soft hits.[6] Through the early 2000s, KEZK moved to a mainstream adult contemporary music format. 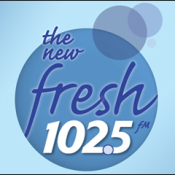 However, while those three stations had playlists more closely resembling hot adult contemporary stations, KEZK continued to feature 1970s artists such as Billy Joel and Chicago.[8] The name "Fresh" was more of a rebranding than a format change, as sister station KYKY already features a Hot AC format.

On May 26, 2015, at 7:05 a.m., after stunting the prior weekend with 1980s music (ending with "Kokomo" by The Beach Boys), KEZK dropped the "Fresh" handle, rebranding as "102.5 KEZK, Today's Hits and Yesterday's Favorites." The first song after the relaunch was "P.Y.T." by Michael Jackson.[9] While many AC stations have moved more contemporary, KEZK continues to play artists from the 1980s, such Michael Jackson, Madonna, Billy Joel and Hall & Oates.

In 2007, the station was nominated for the top 25 markets Adult Contemporary station of the year award by Radio & Records magazine. Other nominees included WMJX in Boston, KOST in Los Angeles; WALK-FM in Nassau, New York; WLTW in New York City; and WBEB in Philadelphia.[13]