A black mecca, in the United States, is a city to which African Americans, particularly singles, professionals, and middle-class families,[1] are drawn to live, due to some or all of the following factors: 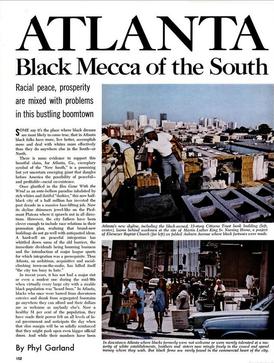 In 1983, Atlanta magazine said that Atlanta's reputation as a black mecca was "deserved because it is true" because "the metro area now has the highest proportion of middle-income African-Americans of any city in the country".[17] A 1997 Ebony magazine article illustrated Atlanta's status as "the new mecca" (and the "land of milk and honey" for blacks) because a poll of the magazine's 100 most influential African Americans voted Atlanta overall the best city for blacks, possessed the most employment opportunities for blacks, it was American's "most diverse city", and was the city with the best schools and most affordable housing for blacks.[12] A 2002 article in the same magazine reconfirmed Atlanta as "the new black mecca" and "the go-to city for blacks."[18]

In 2009, the Associated Press characterized Atlanta's status as a black mecca by black political power in its City Hall.[13]

A 2015 report showed that the Atlanta area had the greatest numerical gain in new black residents than any metropolitan area in the U.S., according to an analysis of census data.[19]

In 2018, Forbes magazine ranked Atlanta tied for the #1 city in the U.S. (along with the Washington, D.C. area) for where African-Americans are doing the best economically.[20][21]

In 2019, USA Today named Atlanta the nation's black tech capital. Atlanta attracts the most black professionals in the tech industry.[22]

Atlanta is the home of the oldest and largest consortium of historically black institutions in the nation. The Atlanta University Center consists of Clark Atlanta University, Spelman College, Morehouse College and the Morehouse School of Medicine. The consortium structure allows for students to cross-register at the other institutions in order to attain a broader collegiate experience.[25]

The first college founded by African-Americans in Georgia, Morris Brown College, is based in Atlanta.[26]

The Atlanta Student Movement was an organization formed in the 1960s by students enrolled in Atlanta's historically black colleges that focused on dismantling systematic racism and oppression of African-Americans. Their courageous efforts led to fairer treatment and better opportunities for African-Americans in the Atlanta area.[27]

In 2011 in a The New York Times article with the short title "Atlanta Emerges as a Black Entertainment Mecca", comedian Cedric the Entertainer, who hosted that year's Soul Train Music Awards, said Atlanta had always been a black mecca and continues to be one, with respect to the black musical talent in the city.[30][31]

According to a 2015 study by NerdWallet, the Atlanta area is home to about 2.1 million black owned businesses which is the highest in the nation.[33][34]

In 2005, The New York Times reported that Atlanta had become a mecca for LGBT blacks, noting that within the African-American community in the U.S., in which being gay was slightly less accepted than in society as a whole, Atlanta formed a reputation for being a progressive place of tolerance with its "too busy to hate" mantra.[38][39] Atlanta is also widely noted for its annual Atlanta Black Pride celebration.[40] An earlier 2004 article in the Atlanta Journal-Constitution also documented Atlanta as a "hub" or "mecca" for black gays.[41][42]

Atlanta's status as a "mecca" for blacks is sometimes questioned, or the concept of a "mecca" refuted altogether, due to the endemic high levels of black poverty that exist alongside black success.[8] In 1997 the Chicago Tribune published an article titled "Atlanta's image as a black mecca losing luster". The loss in "luster" was because of a reality that too many blacks weren't coming close to financial success, but rather "caught up in a vicious cycle of poverty, crime and homelessness". The city had among the highest crime rates in the nation, some inner-city blacks were unable to travel to jobs in the suburbs, and despite 20 years of black city leadership, the reality was those city officials were unable to solve these systemic problems.[43] Harlem in New York City was widely noted as a black mecca during the 1920s and 1930s. In March 1925 the leading magazine Survey Graphic produced an issue entitled "Harlem: Mecca of the New Negro"[4] that was devoted to the African-American literary and artistic movement now known as the "Harlem Renaissance". Alain Locke guest-edited this issue. Much of the material appears in his 1925 anthology "The New Negro."[2][3] In 1965, author Seth Scheiner published the book Negro Mecca; A History of the Negro in New York City, 1865-1920.[44]

The 2001 book Harlemworld documented that the concept of Harlem as a black mecca at that time (i.e. seven decades after the Harlem Renaissance) was still present among many residents - a concept that was "history-laden" or even quasi-mythical.[45][46]

Black Mecca: The African Muslims of Harlem was also the title of a 2010 book by Temple University professor Zain Abdullah about Muslim West African immigrants in New York City, using "Mecca" not only in the generic sense of "a place that people are drawn to" but also playing on the original meaning of Mecca as the Muslim holy city.[47]

In 2016, Black Enterprise called Houston the South’s "next great Black business Mecca".[48] The Houston metropolitan area boasts an accomplished and strategically networked community of African American entrepreneurs, executives, and business leaders as any city in the country. Houston also claims one of the most robust and effective business development and advocacy organizations in the country. The Greater Houston Black Chamber of Commerce, founded in 1935 as Houston's first black civic organization and currently led by Chairwoman Courtney Johnson Rose, is the go-to source for business development and strategic partnership opportunities, as well as education, capital, and contacts for entrepreneurs. Mayor Sylvester Turner, the city's second and current black mayor (elected in 2016). It is worth noting that it was during the mayoral term of Lee Brown (1998-2004), Houston's first African American mayor, that the city was named No. 1 on Black Enterprise's list of Top Cities for African Americans to Live, Work, and Play, edging out perennial black business meccas, including Atlanta, Harlem, and Washington, D.C.[48] Houston has long been known as a popular destination for Black and African Americans due to the city's well-established and influential Black or African American community.[49] The Houston area is home to the largest African American community west of the Mississippi River.[50][51][52] The Houston hip hop scene is highly influential and has a unique sound that is recognized worldwide. In particular, chopped and screwed created by DJ Screw in the 1990s, is a staple in Houston's hip-hop scene. Megan Thee Stallion, Travis Scott, Bun B, Slim Thug, Kirko Bangz, Z-Ro, Pimp C, and Geto Boys are some popular hip-hop artists from Houston. Drake, one of the world's best selling music artists, stated he was highly influenced by Houston's black culture and music. [56][57][58] In 2008, former Houston mayor Annise Parker declared June 10th Drake Day in Houston for his promotion and support of the city.[59]

Houston is ranked as one of the best U.S. cities for Black professional growth and achievement.[60] Houston is home to a number of successful entrepreneurs and established Black owned businesses that contribute to the thriving economy of the city.[61] The only Black-owned bank in Texas, Unity National Bank, is based in Houston. The Greater Houston Black Chamber (GHBC) is a notable forum in Houston that provides a collaborative network of African-American owned businesses, entrepreneurs, and professionals.

A significant number of African immigrants call Houston home. In addition, Houston has the largest Nigerian immigrant population in the U.S. with many of these Nigerians being highly educated and holding postgraduate degrees. The Houston area has many African-owned stores and supermarkets.

Other U.S. cities and statistics

Comparison of black-majority cities at the time of the 2010 US Census:

In the 1850s, the city of Chatham, Ontario was referred to as the "Black Mecca of Canada", as a final stop on the Underground Railroad.[68] A museum in the city, the Black Mecca Museum, still bears this name.[69] The small city was home to a number of black churches and business, with Black Canadians making up 1/3 of the city's population and controlling a significant portion of the city's political power. Nearby Dresden and Buxton were home to thousands of land-owning black residents.[70] The 2021 documentary, The North Star: Finding Black Mecca explores this chapter of Chatham's history.[71][72]