Fluvanna County is a county located in the Piedmont region of the Commonwealth of Virginia. As of the 2020 census, the population was 27,249.[1] Its county seat is Palmyra,[2] while the most populous community is the census designated place of Lake Monticello.

Through the 17th century, the Point of Fork (near Columbia where the James and Rivanna rivers meet) was the site of Rassawek, a major Monacan village of the Native Americans. By 1701, the Seneca Iroquois had overrun the entire Virginia Piedmont, which they sold to Virginia Colony in 1721 at the Treaty of Albany.

The county was named for the Fluvanna River, a name once given to the James River west of Columbia. "Fluvanna" means "Anne's River", in honor of Anne, Queen of Great Britain, who reigned until 1714.[3] Located in the Piedmont above the Fall Line, the county has the James and Rivanna rivers running through it. It was sometimes referred to as "Old Flu."[4]

Fluvanna was defended by six militia companies during the American Revolutionary War. The county was invaded by British forces in 1781 who destroyed the Point of Fork Arsenal. From an initial 882 "tithables," the population reached 3,300 by 1782. Columbia was formed in 1788 with Bernardsburg and Wilmington following soon after. Lyles Baptist Church was organized in 1774 and the formation of the Methodist denomination had its roots in a Conference held in Fluvanna in 1779. The "Brick Union" Church was built in 1825 for the use of Episcopalians, Methodists, Baptists and Presbyterians. The village of Fork Union grew up around the Church.

When Palmyra was made the county seat in 1828 it quickly became a thriving town after the new courthouse was completed in 1830.

In the late eighteenth century, Thomas Jefferson improved the navigability of the Rivanna River, as he owned much property along its upper course, e.g. Shadwell and Monticello plantations. Improvements included in the first generation (through 1830) were sluice cuts, small dams and batteaux locks.

Second-generation (1840–1870) improvements made by others included construction of long stretches of canal, serviced by large locks, many of which are still visible along the river. Shortly after the completion of the initial Rivanna navigational works, Virginia requested that the river be opened to public usage. Jefferson reportedly initially refused, but the state insisted and the Rivanna became an integral part of the central Virginian transportation network. The route serviced a large community of farmsteads, plantations throughout Albemarle and Fluvanna counties. It also was lined by increasing numbers of industrial facilities, such as those at Union Mills. Construction of the larger mills prompted the great improvements to navigation. For instance, Union Mills featured a two-and-a-half-mile long canal and towpath, and one upper and two massive lower locks, all directly upon the river.

Where the Rivanna meets the James River at Columbia, the Rivanna Connexion Canal merged with a much longer canal. (The series of locks which connected the two canals lie just outside the Town of Columbia and are mostly buried by sediment today). In 1840, the James River and Kanawha Canal was constructed adjacent to the north bank of the James River and opened to traffic. The new canal was part of a planned link between the Chesapeake Bay and the Atlantic Ocean via the James and the Kanawha rivers; it was intended to connect via the Ohio River, to the Mississippi River and the Gulf of Mexico. The canal was used by packet and freight boats, which replaced the earlier shallow-draft batteau for commerce. These boats brought goods and passengers to and from Richmond and points beyond. Long a dream of early Virginians such as George Washington, who was a surveyor early in his career, the canal was never completed as envisioned.[citation needed]

In the batteaux era, Milton was the head of navigation on the river. By the early nineteenth century, horse-drawn canal boats were traveling all the way upstream to Charlottesville. The head of navigation was located at the point where the Fredericksburg Road (now VA 20) and Three Chopt Road (U.S. Route 250), the primary road to Richmond, met and entered the city at the Free Bridge, establishing the city as a major commercial hub.

While no Civil War battles were fought in Fluvanna, Union soldiers burned mills and bridges and damaged the James River and Kanawha Canal to disrupt traffic and commerce. During the American Civil War more than 1,200 of the county's citizens served in the Confederate forces. Its citizens served in infantry, cavalry, and artillery units during the war, including the Fluvanna Artillery.

The canal was repaired after the war, but traffic never returned to pre-war levels, as railroads were being constructed throughout the state and were more efficient. After many years of trying to compete with the ever-expanding railroad network, the James River and Kanawha Canal was conveyed to a new railroad company by a deed dated March 4, 1880. Railroad construction workers promptly started laying tracks on the towpath. The new Richmond and Allegheny Railroad offered a water-level route from the Appalachian Mountains just east of West Virginia near Jackson's River Station (now Clifton Forge) through the Blue Ridge Mountains at Balcony Falls to Richmond. In 1888 the railroad was leased, and later purchased, by Collis P. Huntington's Chesapeake and Ohio Railway.

Fork Union Military Academy (FUMA) was initially founded as Fork Union Academy in October 1898 by Dr. William E. Hatcher, a prominent local Baptist minister. The first class had 19 boys and girls. In 1902, the academy took on a military structure to provide organization, discipline, and physical development for the boys of what was a rapidly growing school. In 1913, the academy became an all-male institution and changed its name to Fork Union Military Academy. That same year, the Academy began receiving support from the Baptist General Association of Virginia, which has continued into the 21st century. FUMA is known for its One Subject Plan as well as Post Graduate Football team that has many NFL players and Heisman Trophy winners as alumni.[5]

Early in the 20th century, the C&O built a new line between the James River Line at Strathmore and the Piedmont Subdivision on the old Virginia Central Railroad's line at Gordonsville. The Virginia Air Line Railway was built to move loads that were too high or too wide to pass through the tunnels of the Blue Ridge Mountain complex between Charlottesville and Waynesboro. Additionally, coal trains from West Virginia headed eastbound for Washington, D.C. and Northern Virginia were routed on the new line to avoid steep mountain grades. The VAL was completed on September 29, 1909. A new freight station was built at Palmyra. The tracks of the VAL were abandoned in 1975, as railroad freight traffic had declined.

The County's school system consists of 3,490 students. There are currently 1 high school, 1 middle school, and 2 elementary schools one of which is an upper elementary school. Student/teacher ratio is 22–1. 17% of residents have a bachelor's degree or higher. As of 2000, 4,657 individuals over three years old enrolled in school, including 827 residents in college or graduate school. According to the 2000 Census, 1,066 students were enrolled in grades 9–12 and 603 in nursery school and kindergarten.

Fluvanna County High school is famous for its unique nickname, 'The Flying Flucos'. The Flying Flucos nickname has been recognized by ESPN as one of the top 10 unique High School nicknames in the country.

Fluvanna has a workforce of 13,206 living in the county.[14] 15% of the workforce lives and works inside the county borders. 84% of county residents work in another locality. In comparison, the equivalent of 22% are in-commuters. [15]

In October 2020, Governor Northam announced Silk City Printing of Paterson, NJ would relocate to Fork Union, VA to occupy the plant vacated by Thomasville Furniture in 2007. This was Fluvanna's first economic development project announced by the Governor's Office.[16] When fully operational, Silk City will be one of Fluvanna's top 10 employers.

The Virginia Department of Corrections operates the Fluvanna Correctional Center for Women in unincorporated Fluvanna County, near Troy.[20] The center houses the female death row.[21] 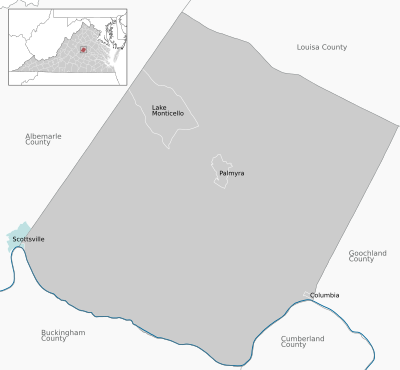