The county was formed in 1750 from Bladen County. It was named for George Anson, Baron Anson, a British admiral, who circumnavigated the globe from 1740 to 1744, and later became First Lord of the Admiralty. Anson purchased land in the state.[3] Anson County is a member of the regional Centralina Council of Governments.[19]

There are 11 schools in the Anson County Schools system that serve the students of the county.[21]

South Piedmont Community College has a campus on Highway 74 near Polkton that serves Anson County residents. 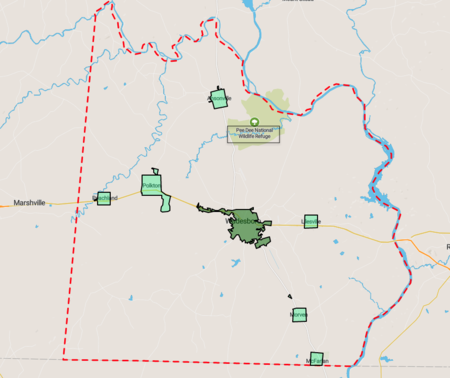 The population ranking of the following table is based on the 2021 Estimates of Anson County.[22]

Steven Spielberg filmed The Color Purple mostly in Lilesville, and a large white farmhouse (the Huntley house, which is located in Lilesville, NC and is an old farmhouse located few miles off Highway 74) was used extensively as the main exterior location in that film.[23][24]