The Marvel Super Heroes[1] is an American animated television series starring five comic book superheroes from Marvel Comics. The first TV series based on Marvel characters, it debuted in syndication on U.S. television in 1966.[2]

Produced by Grantray-Lawrence Animation, headed by Grant Simmons, Ray Patterson, and Robert Lawrence,[3] it was an umbrella series of five segments, each approximately seven minutes long, broadcast on local television stations that aired the show at different times. The series ran initially as a half-hour program made up of three seven-minute segments of a single superhero, separated by a short description of one of the other four heroes. It has also been broadcast as a mixture of various heroes in a half-hour timeslot, and as individual segments as filler or within a children's TV program.[4]

The segments were "Captain America", "The Incredible Hulk", "Iron Man", "The Mighty Thor" and "The Sub-Mariner".[5]

Sixty-five half-hour episodes of three seven-minute chapters were produced, for a total of 195 segments that ran initially in broadcast syndication from September to December 1966.[6][7]

The series, produced in color, had extremely limited animation produced by xerography, consisting of photocopied images taken directly from the comics and manipulated to minimize the need for animation production. The cartoons were presented as a series of static comic-strip panel images; generally the only movement involved the lips when a character spoke, the eyes, and the occasional arm or leg, or a fully animated black silhouette. The series used the original stories largely in their entirety, showcasing Jack Kirby, Steve Ditko and Don Heck art, among others, from the period fans and historians call the Silver Age of comic books.

Stan Lee, Marvel's editor and art director at the time, said in 2004 that he believed publisher Martin Goodman negotiated the deal with Grantray-Lawrence and that Lawrence chose the characters to be used. Lawrence rented Lee and his wife a penthouse apartment at 30 East 60th Street, near Madison Avenue, for Lee's use while he worked on the series. (Lee lived in Hewlett Harbor, New York, on Long Island, at the time.) Lee recalled, "I really don't remember any reaction from the Marvel artists involved. I wish I could claim to have written the [theme song] lyrics, because I think they're brilliant, but alas, I didn't".[8] The songs were written by Jacques Urbont.[9] In the meantime, Steve Krantz (who was distributing the series), made a deal to subcontract production of The Mighty Thor segments to Paramount Cartoon Studios[10] (the animation division of Paramount Pictures, formerly known as Famous Studios), headed at that time by Fleischer Studios veteran Shamus Culhane.

Marvel announced the series in the "Marvel Bullpen Bulletins" of the November 1966 issues, stating in that monthly fan page's hyperbolic style that, "It won't be long before our swingin' super-heroes [sic] make their star-studded debut on TV, appearing five nights a week — that's right, five — count 'em — five nights a week, for a half-hour each night. So you've just got time to make sure your set's in good working order — check your local paper for time and station — and prepare to have a ball!"[11]

This list is incomplete; you can help by adding missing items. (November 2014)

Appearing in guest roles were:

Each episode consisted of three chapters. One depiction of the Hulk in The Marvel Super Heroes

One depiction of Iron Man in the series 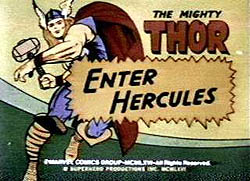 Title card for a Sub-Mariner episode

In 2003, Hulk segments giving his origin story appeared as an extra on the Buena Vista Home Entertainment DVD release of the 1996 animated television series The Incredible Hulk.[21]

In September 2004, Buena Vista Home Entertainment announced plans to release The Marvel Superheroes Show on June 28, 2005, as a five-DVD set titled The 60's Superheroes.[22] By February 2005, however, the release was off the schedule.[23]

On May 21, 2007, the UK company Maximum Entertainment released four two-disc sets, for Region 2, each set containing 13 episodes of the Captain America, Iron Man, Sub-Mariner and Thor segments respectively, with each episode re-edited into continuous, half-hour segments.[24] On August 25, 2008, the UK company Liberation Entertainment released a two-disc set of the Hulk segments, re-edited into 13 20-minute episodes.[citation needed]