Adams County is the westernmost county in the U.S. state of Illinois. As of the 2020 census, the population was 65,737.[1] Its county seat is Quincy.[2] Adams County is part of the Quincy, IL–MO Micropolitan Statistical Area.

Adams County was formed in 1825 out of Pike County. Its name is in honor of the sixth President of the United States, John Quincy Adams. 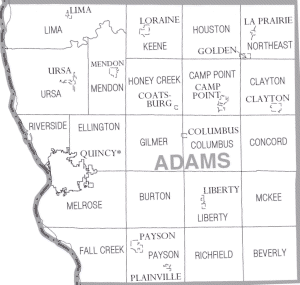 Adams County, positioned in a primarily rural section of Illinois is culturally isolated from Chicago, and therefore more conservative than the state's northeastern corner. Quincy, the county seat, holds a high number of socially conservative Catholics[13] and likewise is the home to the campus of Quincy University, a private Catholic liberal arts college, and the Western Catholic Union.

The county is part of the historic belt of German settlement extending into the Missouri Rhineland. Since it was antagonistic to the Yankee northeast of Illinois, it voted solidly Democratic until 1892. After being a swing county in the first half of the twentieth century, Adams County has been a Republican stronghold. It has gone Republican in all but five presidential elections since 1920. The county last supported a Democrat in 1964, when it voted for Lyndon Johnson. The county regularly rejects Democrats at the state level as well; it has not supported a Democrat for Governor of Illinois since Adlai Stevenson II in 1948, and there are no elected Democrats above the county level.[14] Notably, while it voted for Barack Obama in his 2004 Senate campaign, he lost it by wide margins in both of his presidential bids.

Wikivoyage has a travel guide for Adams County (Illinois).