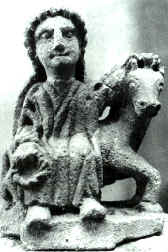 A votive offering to an unnamed deity

Gallo-Roman religion is a fusion of the traditional religious practices of the Gauls, who were originally Celtic speakers, and the Roman and Hellenistic religions introduced to the region under Roman Imperial rule. It was the result of selective acculturation.

In some cases, Gaulish deity names were used as epithets for Roman deities, and vice versa, as with Lenus Mars or Jupiter Poeninus. In other cases, Roman gods were given Gaulish female partners – for example, Mercury was paired with Rosmerta and Sirona was partnered with Apollo. In at least one case – that of the equine goddess Epona – a native Celtic goddess was also adopted by Romans.

The Jupiter Column was a distinctive type of religious monument from Roman Gaul and Germania, combining an equestrian Jupiter overcoming a giant (or sometimes Jupiter enthroned) with panels depicting many other deities.

Eastern mystery religions penetrated Gaul early on. These included the cults of Orpheus, Mithras, Cybele, and Isis. The imperial cult, centred primarily on the numen of Augustus, came to play a prominent role in the public religion of Gaul, most dramatically at the Sanctuary of the Three Gauls at Lugdunum.

Roman religious practices such as offerings of incense and animal sacrifice, dedicatory inscriptions, and naturalistic statuary depicting deities in anthropomorphic form were combined with specific Gaulish practices such as circumambulation around a temple. This gave rise to a characteristic Gallo-Roman fanum, identifiable in archaeology from its concentric shape.