Since November 2018, the party has been led by Pamela Rendi-Wagner. It is currently the second largest of five parties in the National Council, with 40 of the 183 seats, and won 21.2% of votes cast in the 2019 legislative election. It holds seats in the legislatures of all nine states; of these, it is the largest party in three (Burgenland, Carinthia, and Vienna.) The SPÖ is supportive of Austria's membership in the European Union,[10] and it is a member of the Socialist International, Progressive Alliance, and Party of European Socialists. It sits with the Progressive Alliance of Socialists and Democrats in the European Parliament; of Austria's 19 MEPs, five are members of the SPÖ. The party has close ties to the Austrian Trade Union Federation (ÖGB) and the Austrian Chamber of Labour (AK).

The SDAPÖ was the second largest party in the Imperial Council of the Austro-Hungarian Empire from the 1890s through 1910s. After the First World War, it briefly governed the First Austrian Republic, but thereafter returned to opposition. The party was banned in 1934 following the Austrian Civil War, and was suppressed throughout Austrofascism and the Nazi period. The party was refounded as the Socialist Party of Austria in 1945 and governed as a junior partner of the ÖVP until 1966. In 1970, the SPÖ became the largest party for the first time in post-war history, and Bruno Kreisky became Chancellor, winning three consecutive majorities (1971, 1975, and 1979). From 1987 to 2000 the SPÖ led a grand coalition with the ÖVP before returning to opposition for the first time in 30 years. The party governed again from 2007 to 2017. Since 2017, the SPÖ have been the primary opposition to the ÖVP governments.

Since its foundation in 1889, the SDAPÖ has been one of the main political forces in Austria. At the start of the First World War, it was the strongest party in parliament. At the ending of that war in 1918, the party leader Karl Renner became Chancellor of the First Republic. The SDAPÖ lost power in 1920, but it retained a strong base of support in the capital Vienna. A period of rising political violence culminated in the banning of the SDAPÖ under the Austrofascist dictatorship (1934–1938).

In the aftermath of the collapse of Austria-Hungary in 1918, the SDAPÖ broadly supported the Anschluss (the union with German Republic). When Anschluss took place in 1938 at the hands of Adolf Hitler's Nazi Germany, he brought Austria into the Second World War. In 1945, the party was reconstituted as the Socialist Party of Austria (German: Sozialistische Partei Österreichs, SPÖ) and was led by Adolf Schärf. The SPÖ entered the government of the Second Republic as part of a grand coalition with the Austrian People's Party (ÖVP) until 1966 and with the Communist Party of Austria until 1949. Renner became the first President of Austria.

From 1971 to 1983, the SPÖ under Bruno Kreisky was the sole governing party. For the following three years, it ruled in coalition with the Freedom Party of Austria (FPÖ), then up to 2000 it was again part of a grand coalition with the ÖVP, with Franz Vranitzky as Chancellor until 1997. In 1991, it reverted to including Democratic in its name, becoming the Social Democratic Party of Austria (German: Sozialdemokratische Partei Österreichs). During this period, the grand coalition combined with the Proporz system, whereby important posts throughout the government were shared out between members of the two main parties, evoked rising discontent. This was a factor in the growing popularity of the FPÖ which came second to the SPÖ in the 1999 Austrian legislative election. The following year, the FPÖ and ÖVP formed a right-wing coalition, displacing the SPÖ from a share in government. While this coalition was still in power, the SPÖ's Heinz Fischer was elected president in the 2004 Austrian presidential election. Following the 2006 Austrian legislative election, another grand coalition was formed between the SPÖ and the ÖVP, lasting until 2017, when the SPÖ went back to the opposition. In the 2019 Austrian legislative election, the SPÖ lost 12 seats and shrunk to 21.2%.

Concerning the role of the SDAPÖ during Nazi rule from 1938 to 1945, the party started opening its archives and set in a commission to investigate its past conduct. Despite the fact the SDAPÖ had been outlawed and many party members imprisoned under Austrofascism, many SDAPÖ members initially welcomed the Anschluss of Austria into Germany back then and some became members of the Nazi Party. Alfred Gusenbauer issued a declaration promising and supporting a full and open investigation ("Klarheit in der Vergangenheit – Basis für die Zukunft"). In 2005, the report about the so-called "brown spots" (German: braune Flecken) was completed and published. The report talks about SDAPÖ members and leaders who became members of the Nazi Party during German rule after the Anschluss. One example given in the report is the case of Heinrich Gross, who received many honours from the party and even the government in the post-war period. This was despite the fact that he worked as a Nazi doctor in the euthanasia ward Am Spiegelgrund in Vienna, where human experiments on children were performed. Those children with presumptive mental defects were eventually killed, often by lethal injection. Gross was probably himself involved in the experimentations and killings. The Austrian judicial system protected him for a very long time from any kind of prosecution, something that was very typical in the post-war period. He enjoyed wide support from the SPÖ and party leaders for a very long time.

Reflecting the change in attitude towards the past, President Heinz Fischer in a 10 April 2006 interview with the liberal newspaper Der Standard strongly criticised Austria's view on its historical role during Nazi rule. He called the traditional view that Austria was the first victim of Nazi aggression as false. The Moscow Declaration of 1943 by émigrés which called for the independence of Austria from Nazi Germany was a problem since it stated that the war was neither started nor wanted by any Austrian ("Und das ist nicht richtig"), that Austrian Jewish victims were not mentioned in the declaration ("kein Wort für die jüdischen Opfer"), that it took decades for them to receive any kind of compensation and justice from the government and that it was regrettable and inexcusable. His statements were direct criticism of the right-wing government of the coalition ÖVP–FPÖ which rejected compensation to victims and the admission of the co-guilt Austrians carried for crimes committed by them during the Second World War.

This section does not cite any sources. Please help improve this section by adding citations to reliable sources. Unsourced material may be challenged and removed. (May 2019) (Learn how and when to remove this template message)
This section needs to be updated. Please help update this article to reflect recent events or newly available information. (January 2020)

Burgenland is a state that is a traditional stronghold of the SPÖ. Since 1964, the governors of this easternmost state have come from the SPÖ. Burgenland is one of the few states that are ruled by a SPÖ majority in the state assembly (Landtag). In 2000, the SPÖ received 46.6%. In 2005, it received 5.2% more votes and ended up with an absolute majority of 51.8%. After losing it in 2010, the SPÖ was able to regain it in the latest election in January 2020. From 2015 to 2020, the SPÖ in Burgenland was in an unusual coalition with the FPÖ. The Governor (Landeshauptmann) of the Burgenland is Hans-Peter Doskozil.

The SPÖ used to be strong in Carinthia as it regularly won the most seats in state elections and the governors used to be Social Democrats until 1989. Since the rise of Jörg Haider and his FPÖ, he successfully pushed the SPÖ out of their leading position. In state elections in 1999, the SPÖ received 32.9%. However, this went up to 38.4% in 2004. Until 2005, the SPÖ was in a coalition with the right-wing FPÖ in Carinthia, where Haider was Governor. This constellation is in question after the chairperson of the Carinthian SPÖ Gabi Schauning decided to resign from her post as Vice-Governor of Carinthia after a fall-out with Haider. Carinthia has a mandatory concentration government, where each party with a certain number of seats in the state parliament automatically participates in the state government. The term coalition refers to the co-operation between parties and not to the participation in the state cabinet.

In 2004. the SPÖ won a surprising victory in Salzburg. It was able to increase its share of votes from 32.2% (1999) to 45.3%. For the first time, the conservative ÖVP lost its traditional dominant position. Gabi Burgstaller became the first SPÖ governess (Landeshauptfrau) in the state's history. In March 2009, the party lost 2 seats (from 17 to 15) with a 39.5% of the popular votes, going to the FPÖ (from 3 to 5) with a 13% of the votes. The ÖVP had 14 seats with a 36.5% of the votes and the Grüne 2 seat with a 7.3% . The BZÖ had no seat with a 3.7% of the votes, showing a growing of the right-wing parties. In the State elections 2013 the SPÖ lost its majority to the ÖVP. Since then, the ÖVP has providing the governor (Landeshauptmann) with Wilfried Haslauer jun. again.

Styria was traditionally ruled by the ÖVP. In 2000, the Styrian SPÖ ended up with 32.3%. In 2005, the voters shifted towards the left, something that also benefited the KPÖ, the local communist party. The SPÖ won 9.4% more and ended up with 40.7%, defeating the ÖVP which got 38.7% of the votes. Styrian SPÖ Chairman Franz Voves became the state Governor. After the State elections 2015 the SPÖ lost the governorship to the ÖVP. Since then, the ÖVP has providing the governor (Landeshauptmann) with Hermann Schützenhöfer again.

In Tyrol, the SPÖ receive few votes since the state is a traditional conservative stronghold. In 2018, the Tyrolean SPÖ received 17.3% of all votes. The winner of the election was the ÖVP under long-term governor Günther Platter, which received 44,3% of the total vote.

Vienna was always traditionally the stronghold of the SPÖ. The current Governor-Mayor of Vienna is Michael Ludwig. In the 2020 Viennese state election the SPÖ raised its vote-share to 41,6%. The party with the largest gains was the ÖVP which doubled its vote-share and won 20,4% of the votes.

Vorarlberg is a traditional stronghold of the conservative ÖVP. Of all the Austrian states, the SPÖ receives the fewest votes in this westernmost state. In the 2019 the SPÖ ended up with 9,5% of the vote, a raise of 0,7%. The winner of the election was the conservative ÖVP under governor Markus Wallner which won around 45%.

The chart below shows a timeline of the social-democratic chairpersons and the Chancellors of Austria since 1945. The left bar shows all the chairpersons (Bundesparteivorsitzende, abbreviated as CP) of the SPÖ, and the right bar shows the corresponding make-up of the Austrian government at that time. The red (SPÖ) and black (ÖVP) colours correspond to which party led the federal government (Bundesregierung, abbreviated as Govern.). The last names of the respective chancellors are shown, with the Roman numeral standing for the cabinets. 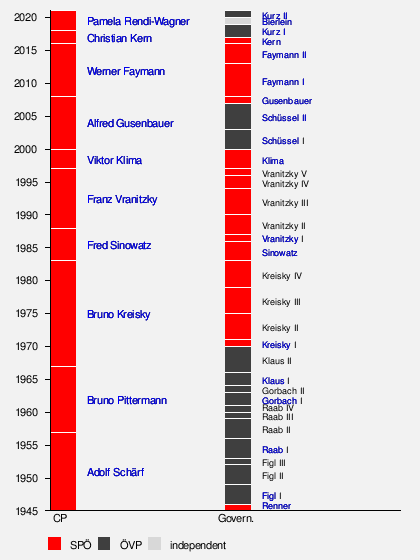 Some groups within the SPÖ such as Der Funke (The Spark) are Marxist and proponents of a radical strain of democratic socialism.[citation needed] SJ Austria, a youth organisation maintaining close relations with the party, is generally perceived of as being more towards the left-wing than the SPÖ itself.[citation needed]