, is a family of continuous multivariate probability distributions parameterized by a vector

's equal to each other.

The Dirichlet distribution of order K ≥ 2 with parameters α1, ..., αK > 0 has a probability density function with respect to Lebesgue measure on the Euclidean space RK-1 given by

belong to the standard

simplex, or in other words:

The normalizing constant is the multivariate beta function, which can be expressed in terms of the gamma function:

whose entries are real numbers in the interval [0,1] such that

, i.e. the sum of the coordinates is equal to 1. These can be viewed as the probabilities of a K-way categorical event. Another way to express this is that the domain of the Dirichlet distribution is itself a set of probability distributions, specifically the set of K-dimensional discrete distributions. The technical term for the set of points in the support of a K-dimensional Dirichlet distribution is the open standard (K − 1)-simplex,[3] which is a generalization of a triangle, embedded in the next-higher dimension. For example, with K = 3, the support is an equilateral triangle embedded in a downward-angle fashion in three-dimensional space, with vertices at (1,0,0), (0,1,0) and (0,0,1), i.e. touching each of the coordinate axes at a point 1 unit away from the origin.

A common special case is the symmetric Dirichlet distribution, where all of the elements making up the parameter vector

have the same value. The symmetric case might be useful, for example, when a Dirichlet prior over components is called for, but there is no prior knowledge favoring one component over another. Since all elements of the parameter vector have the same value, the symmetric Dirichlet distribution can be parametrized by a single scalar value α, called the concentration parameter. In terms of α, the density function has the form

More generally, the parameter vector is sometimes written as the product

of a (scalar) concentration parameter α and a (vector) base measure

The matrix is thus singular.

More generally, moments of Dirichlet-distributed random variables can be expressed as[6]

Conjugate to categorical or multinomial

Formally, this can be expressed as follows. Given a model

then the following holds:

This relationship is used in Bayesian statistics to estimate the underlying parameter p of a categorical distribution given a collection of N samples. Intuitively, we can view the hyperprior vector α as pseudocounts, i.e. as representing the number of observations in each category that we have already seen. Then we simply add in the counts for all the new observations (the vector c) in order to derive the posterior distribution.

In Bayesian mixture models and other hierarchical Bayesian models with mixture components, Dirichlet distributions are commonly used as the prior distributions for the categorical variables appearing in the models. See the section on applications below for more information.

random variable, the differential entropy of X (in nat units) is[9]

is the digamma function.

The following formula for

can be used to derive the differential entropy above. Since the functions

are the sufficient statistics of the Dirichlet distribution, the exponential family differential identities can be used to get an analytic expression for the expectation of

and its associated covariance matrix:[citation needed]

is the digamma function,

is the trigamma function, and

is the Kronecker delta.

The spectrum of Rényi information for values other than

and the information entropy is the limit as

. The conditional information entropy of

is a scalar random variable. If

has a symmetric Dirichlet distribution with all

, the expected value of the entropy (in nat units) is[11]

then, if the random variables with subscripts i and j are dropped from the vector and replaced by their sum,

, then the vector X is said to be neutral[12] in the sense that XK is independent of

and similarly for removing any of

. Observe that any permutation of X is also neutral (a property not possessed by samples drawn from a generalized Dirichlet distribution).[13]

Combining this with the property of aggregation it follows that Xj + ... + XK is independent of

. In fact it is true, further, for the Dirichlet distribution, that for

, and the two vectors

, viewed as triple of normalised random vectors, are mutually independent. The analogous result is true for partition of the indices {1,2,...,K} into any other pair of non-singleton subsets.

The characteristic function of the Dirichlet distribution is a confluent form of the Lauricella hypergeometric series. It is given by Phillips as[14]

The sum is over non-negative integers

. Phillips goes on to state that this form is "inconvenient for numerical calculation" and gives an alternative in terms of a complex path integral:

where L denotes any path in the complex plane originating at

, encircling in the positive direction all the singularities of the integrand and returning to

plays a key role in a multifunctional inequality which implies various bounds for the Dirichlet distribution.[15]

Although the Xis are not independent from one another, they can be seen to be generated from a set of K independent gamma random variable.[16]: 594  Unfortunately, since the sum V is lost in forming X (in fact it can be shown that V is stochastically independent of X), it is not possible to recover the original gamma random variables from these values alone. Nevertheless, because independent random variables are simpler to work with, this reparametrization can still be useful for proofs about properties of the Dirichlet distribution.

Conjugate prior of the Dirichlet distribution

is a K-dimensional real vector and

is a scalar parameter. The domain of

is restricted to the set of parameters for which the above unnormalized density function can be normalized. The (necessary and sufficient) condition is:[18]

The conjugation property can be expressed as

Intuitive interpretations of the parameters

One example use of the Dirichlet distribution is if one wanted to cut strings (each of initial length 1.0) into K pieces with different lengths, where each piece had a designated average length, but allowing some variation in the relative sizes of the pieces. Recall that

values specify the mean lengths of the cut pieces of string resulting from the distribution. The variance around this mean varies inversely with 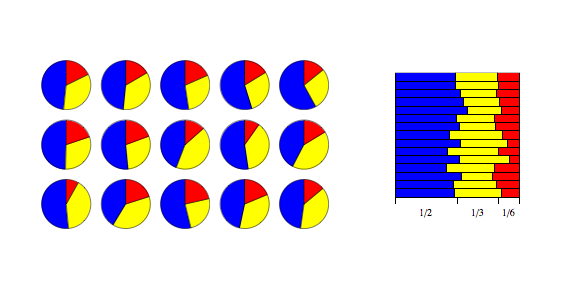 Consider an urn containing balls of K different colors. Initially, the urn contains α1 balls of color 1, α2 balls of color 2, and so on. Now perform N draws from the urn, where after each draw, the ball is placed back into the urn with an additional ball of the same color. In the limit as N approaches infinity, the proportions of different colored balls in the urn will be distributed as Dir(α1,...,αK).[19]

For a formal proof, note that the proportions of the different colored balls form a bounded [0,1]K-valued martingale, hence by the martingale convergence theorem, these proportions converge almost surely and in mean to a limiting random vector. To see that this limiting vector has the above Dirichlet distribution, check that all mixed moments agree.

Each draw from the urn modifies the probability of drawing a ball of any one color from the urn in the future. This modification diminishes with the number of draws, since the relative effect of adding a new ball to the urn diminishes as the urn accumulates increasing numbers of balls.

With a source of Gamma-distributed random variates, one can easily sample a random vector

from the K-dimensional Dirichlet distribution with parameters

from Gamma distributions each with density

The joint distribution of

Next, one uses a change of variables, parametrising

, and performs a change of variables from

One must then use the change of variables formula,

is the transformation Jacobian.

Writing y explicitly as a function of x, one obtains

The determinant can be evaluated by noting that it remains unchanged if multiples of a row are added to another row, and adding each of the first K-1 rows to the bottom row to obtain

which can be expanded about the bottom row to obtain

Substituting for x in the joint pdf and including the Jacobian, one obtains:

Each of the variables

Finally, integrate out the extra degree of freedom

Which is equivalent to

Below is example Python code to draw the sample:

This formulation is correct regardless of how the Gamma distributions are parameterized (shape/scale vs. shape/rate) because they are equivalent when scale and rate equal 1.0.

A less efficient algorithm[20] relies on the univariate marginal and conditional distributions being beta and proceeds as follows. Simulate

in order, as follows. For

This iterative procedure corresponds closely to the "string cutting" intuition described above.

Below is example Python code to draw the sample: