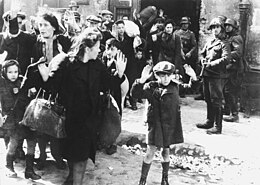 The governments of the German Empire and Nazi Germany (under Adolf Hitler) ordered, organized and condoned a substantial number of war crimes, first in the Herero and Namaqua genocide and then in the First and Second World Wars. The most notable of these is the Holocaust in which millions of Jews and Romani were systematically murdered. Millions of civilians and prisoners of war also died as a result of German abuse, mistreatment, and deliberate starvation policies in those two conflicts. Much of the evidence was deliberately destroyed by the perpetrators, such as in Sonderaktion 1005, in an attempt to conceal the crimes.

Considered to have been the first genocide of the 20th century, the Herero and Namaqua Genocide was perpetrated by the German Empire between 1904 and 1907 in German South West Africa (modern-day Namibia), during the Scramble for Africa.[1][2][3][4][5] On January 12, 1904, the Herero people, led by Samuel Maharero, rebelled against German colonialism. In August, General Lothar von Trotha of the Imperial German Army defeated the Herero in the Battle of Waterberg and drove them into the desert of Omaheke, where most of them died of thirst. In October, the Nama people also rebelled against the Germans only to suffer a similar fate.

In total, from 24,000 up to 100,000 Herero and 10,000 Nama died.[6][7][8][9][10] The genocide was characterized by widespread death by starvation and thirst because the Herero who fled the violence were prevented from returning from the Namib Desert. Some sources also claim that the German colonial army systematically poisoned wells in the desert.[11][12] Aerial photograph of a German gas attack on the Eastern Front of World War I. Lethal poison gas was first introduced by Germany and subsequently utilized by the other major belligerents in violation of the Hague Convention IV of 1907

Documentation regarding German war crimes in World War I was seized and destroyed by Nazi Germany during World War II, after occupying France, along with monuments commemorating their victims.[13]

Poison gas was first introduced as a weapon by Imperial Germany, and subsequently used by all major belligerents, in violation of the 1899 Hague Declaration Concerning Asphyxiating Gases and the 1907 Hague Convention on Land Warfare, which explicitly forbade the use of "poison or poisoned weapons" in warfare.[14][15]

Depiction of the execution of civilians in Blégny by Évariste Carpentier

In August 1914, as part of the Schlieffen Plan, the German Army invaded and occupied the neutral nation of Belgium without explicit warning, which violated a treaty of 1839 that the German chancellor dismissed as a "scrap of paper" and the 1907 Hague Convention on Opening of Hostilities.[16] Within the first two months of the war, the German occupiers terrorized the Belgians, killing thousands of civilians and looting and burning scores of towns, including Leuven, which housed the country's preeminent university, mainly in retaliation for Belgian guerrilla warfare, (see francs-tireurs). This action was in violation of the 1907 Hague Convention on Land Warfare provisions that prohibited collective punishment of civilians and looting and destruction of civilian property in occupied territories.[17]

The raid on Scarborough, Hartlepool and Whitby, which took place on December 16, 1914, was an attack by the Imperial German Navy on the British seaport towns of Scarborough, Hartlepool, West Hartlepool, and Whitby. The attack resulted in 137 fatalities and 592 casualties. The raid was in violation of the ninth section of the 1907 Hague Convention which prohibited naval bombardments of undefended towns without warning,[18] because only Hartlepool was protected by shore batteries.[19] Germany was a signatory of the 1907 Hague Convention.[20] Another attack followed on 26 April 1916 on the coastal towns of Yarmouth and Lowestoft but both were important naval bases and defended by shore batteries.[citation needed]

Unrestricted submarine warfare was instituted in 1915 in response to the British naval blockade of Germany. Prize rules, which were codified under the 1907 Hague Convention—such as those that required commerce raiders to warn their targets and allow time for the crew to board lifeboats—were disregarded and commercial vessels were sunk regardless of nationality, cargo, or destination. Following the sinking of the RMS Lusitania on 7 May 1915 and subsequent public outcry in various neutral countries, including the United States, the practice was withdrawn. However, Germany resumed the practice on 1 February 1917 and declared that all merchant ships regardless of nationalities would be sunk without warning. This outraged the U.S. public, prompting the U.S. to break diplomatic relations with Germany two days later, and, along with the Zimmermann Telegram, led the U.S. entry into the war two months later on the side of the Allied Powers.

Chronologically, the first German World War II crime, and also the very first act of the war, was the bombing of Wieluń, a town where no targets of military value were present.[21][22]

More significantly, The Holocaust of the Jews, the Action T4 killing of the disabled and the Porajmos of the Gypsies are the most notable war crimes committed by Nazi Germany during World War II. Not all of the crimes committed during the Holocaust and similar mass atrocities were war crimes. Telford Taylor (The U.S. prosecutor in the German High Command case at the Nuremberg Trials and Chief Counsel for the twelve trials before the U.S. Nuremberg Military Tribunals) explained in 1982: The Holocaust: ghettos, concentration and extermination camps during World War II across Europe Destruction of Adam Mickiewicz Monument in Cracow, Poland, by German forces on August 17, 1940 as far as wartime actions against enemy nationals are concerned, the [1948] Genocide Convention added virtually nothing to what was already covered (and had been since the Hague Convention of 1899) by the internationally accepted laws of land warfare, which require an occupying power to respect "family honors and rights, individual lives and private property, as well as religious convictions and liberty" of the enemy nationals. But the laws of war do not cover, in time of either war or peace, a government's actions against its own nationals (such as Nazi Germany's persecution of German Jews). And at the Nuremberg war crimes trials, the tribunals rebuffed several efforts by the prosecution to bring such "domestic" atrocities within the scope of international law as "crimes against humanity."

Massacres and war crimes of World War II by location Burned out cars and buildings still litter the remains of the original village in Oradour-sur-Glane, as left by Das Reich SS division Hartheim Euthanasia Centre, where over 18,000 people were killed in Action T4

Massacre of Kondomari in Greece, June 1941

In addition, more than 90 villages and towns are recorded from the Hellenic network of martyr cities.[30] During the triple German, Italian and Bulgarian, occupation about 800,000 people lost their lives in Greece (see World War II casualties).

A body lies in the via Rasella, Rome, during the round up of civilians by Italian collaborationist soldiers and German troops after the partisan bombing on 13 March 1944. The anti-Jewish pogrom in Kaunas, in which thousands of Jews were killed in the last few days of June 1941 Man showing corpse of a starved infant in the Warsaw ghetto, 1941 A column of Polish civilians being led by German troops through Wolska Street in early August 1944. Film footage taken by the Polish Underground showing the bodies of women and children murdered by SS troops in Warsaw, August 1944. A victim of starvation in besieged Leningrad in 1941