Overall, England is divided into nine regions and 48 ceremonial counties, although these have only a limited role in public policy. For the purposes of local government, the country is divided into counties, districts and parishes. In some areas, counties and districts form a two-tier administrative structure, while in others they are combined under a unitary authority. Parishes cover only part of England.

The current system is the result of incremental reform which has its origins in legislation enacted in 1965 and 1972.[1]

At the highest level, all of England is divided into nine regions that are each made up of a number of counties and districts. These 'government office regions' were created in 1994,[2] and from the 1999 Euro-elections up until the UK's exit from the EU, they were used as the European Parliament constituencies in the United Kingdom and in England's European Parliament constituencies.

The regions vary greatly in their areas covered, populations and contributions to the national economy.[2] All have the same status, except London which has substantive devolved powers.[3]

There was a failed attempt to create elected regional assemblies outside London in 2004 and since then the structures of regional governance (regional assemblies, regional development agencies and local authority leaders' boards) have been subject to review. Following the change of government in 2010, these were scheduled for abolition by 2012.[needs update] 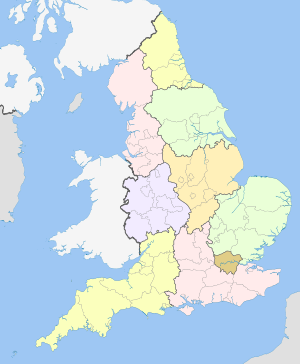 There is a general push towards the reorganisation of English local government as unitary authorities. Often reorganisation is a condition of the devolution of new powers.[6]

46 unitary authorities were created between 1995 and 1998 and nine more were created in 2009, followed by further changes in 2019, 2020 and 2021. They were formed either by non-metropolitan districts taking on county-level functions, or by counties taking on district-level functions. In some cases, borders were altered or districts were combined during this reorganisation. Berkshire is an anomaly in this arrangement whereby its districts became unitary authorities, but the non-metropolitan county was not formally abolished.[7]

Six large conurbations of England correspond to metropolitan counties.[1] Each metropolitan county had a county council providing limited strategic services, such as public transport and planning, from 1974 to 1986.[1] Despite no longer having county councils the metropolitan counties still legally exist, and are each a ceremonial county. County-level functions, such as public transport, are exercised by joint-boards and other arrangements organised by the district councils. In the metropolitan counties, the 36 district councils operate effectively as unitary authorities and provide the majority of services, including education and social services.[2] All metropolitan districts additionally have the status of borough, and some are cities, although this has no effect on their powers or functions. From April 2011 there has been a formal upper-tier structure in Greater Manchester with the creation of the Greater Manchester Combined Authority.[13]

For non-administrative purposes, England is wholly divided into 48 counties,[12] commonly known, but not named in statute, as ceremonial counties. These counties are used for the purposes of appointing Lords Lieutenant[12] who are historically the Crown's representatives in those areas. Ceremonial counties are often different from the metropolitan and non-metropolitan counties used for local government as they include the areas covered by unitary authorities. They are taken into consideration when drawing up Parliamentary constituency boundaries.[citation needed]

The civil parish is the most local unit of government in England.[1] A parish is governed by a parish council or parish meeting, which exercises a limited number of functions that would otherwise be delivered by the local authority. There is one civil parish in Greater London (Queen's Park, in the City of Westminster),[16] and not all of the rest of England is parished. The number of parishes and total area parished is growing.