Union County is a county in the northern part of the U.S. state of New Jersey. As of the 2020 United States Census, the county's population was 575,345,[5] making it the seventh-most populous of New Jersey's 21 counties. Its county seat is Elizabeth.[3]

In 2015, the county had a per capita personal income of $60,089, the seventh-highest in New Jersey and ranked 152nd of 3,113 counties in the United States.[6][7] The Bureau of Economic Analysis ranked the county as having the 119th-highest per capita income of all 3,113 counties in the United States (and the eighth-highest in New Jersey) in 2009.[8] A study by Forbes.com determined that Union County pays the second-highest property taxes of all U.S. counties, based on 2007 data.[9]

With a population density of 4,955 people per square mile (water excluded), Union County was the 15th-most densely populated county in the United States as of the 2010 Census, and third-densest in New Jersey, behind Hudson County (ranked 6th nationwide at 9,754 per square mile) and Essex County (ranked 11th at 6,126).[10][11] The county is located in the North Jersey region.

As the last county created in New Jersey in 1857, it was named after the Union threatened by slavery dispute during this period, which would erupt into civil war in 1861.

Many historic places and structures are to be found in the county, including on the National Register of Historic Places listings in Union County, New Jersey.[12]

Every fall, Union County holds its annual "Four Centuries in a Weekend" festival for the public, celebrating and touring historic buildings, museums and sites in the county.[13]

Much of Union County is relatively flat and low-lying. Only in the northwestern corner does any significant relief appear as the Watchung Mountains cross the county. It is there that highest elevations, two areas approximately 560 feet (170 m) above sea level, are found in Berkeley Heights.[16] The lowest elevation is sea level along the eastern shore at the Arthur Kill.

Parks that are not managed by the county government include:

The Rahway River Parkway is a greenway of parkland that hugs the Rahway River and its tributaries, such as Nomahegan Brook. It was the inaugural project of the Union County Parks Commission designed in the 1920s by the Olmsted Brothers firm, who were the sons of landscape architect Frederick Law Olmsted. Several county and municipal parks run along the Rahway River.[29][30]

The county's Jewish population was 35,000 as of 2004, with notable communities located in Cranford, Elizabeth, Hillside, Linden, Scotch Plains, Springfield, Union, and Westfield.[48]

The Union County Courthouse prior to 1900.

Union County is governed by a nine-member Board of County Commissioners. The members are elected at-large in partisan elections to serve three-year terms on a staggered basis, with three seats coming up for election each year. The Board sets policies for the operation of the county. The Commissioners perform the county's legislative and executive functions. In their legislative role, they formulate and adopt a budget and set county policies and procedures. In their executive role, they oversee county spending and functioning. Many of the administrative duties are delegated by the Board of County Commissioners to the County Manager. Each of the commissioners serves on various committees and boards as a part of their duties. These include committees on Economic Development, Parks and Recreation, and Public Works and Policy. In addition, the Board oversees the county's Open Space Trust Fund. Day-to-day operation of the county and its departments is supervised by an appointed County Manager, Edward Oatman.[51] In 2016, freeholders were paid $30,692, while the Freeholder vice chairman received $31,732 and the Freeholder chairman had an annual salary of $32,773.[52]

Pursuant to Article VII Section II of the New Jersey State Constitution, each county in New Jersey is required to have three elected administrative officials known as "constitutional officers." These officers are the County Clerk and County Surrogate (both elected for five-year terms of office) and the County Sheriff (elected for a three-year term).[65] Union County's constitutional officers are:

Union County has the only county seal in the nation that depicts a woman being shot, the murder of Elizabethtown's Hannah Caldwell by British soldiers during the American Revolutionary War.[74][75]

The 21 municipalities of Union County are represented by three separate legislative districts.[85] It is currently headed by Peter Corvelli.

It was headed by Ralph Froehlich, a Union resident who was first elected in 1977 and served in office for 37 years, making him the longest-serving Sheriff in New Jersey history.[87] There are two top deputies, known as undersheriffs, and they are Dennis Burke and Amilcar Colon. A 1981 investigation of the Union County Jail reviewed issues relating to overcrowding, escapes, escape attempts and suicides in the detention facility.[88]

On July 1, 2021, the Sheriff's Office regained control of the Union County Jail and made it a division within the organization; the Division of Corrections.

The New Jersey State Policemen's Benevolent Association Local 108 is the official labor union and the collective bargaining agent for the Sheriff's Officers of Union County. This body is subdivided into Local 108 for the line officers and Local 108A for the supervisors (sergeants, lieutenants, & captains). 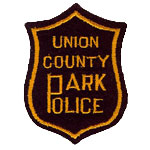 The Union County Police have several divisions and are relied upon for their multiple services. Currently assigned are Patrol, Detective Bureau, Emergency Services Unit, and the Marine Unit. Union County Regional 911 and Dispatch is one of the many services that the County Police provide. They are the primary PSAP for multiple municipalities, provide police/fire/EMS dispatch, dispatch medics, and Union County Fire Mutual Aid. The PD belongs to the New Jersey State Policemen's Benevolent Association, Local 73.

The only line of duty death was under the Union County Park Police. After two years of service, Patrolman Fitzpatrick was killed by a drunk driver October 17, 1928.[90]

Kean University, a co-educational, public research university dating back to 1855 is located in Union and Hillside, serving nearly 13,000 undergraduates. Kean University educates its students in the liberal arts, the sciences and the professions; it is best known for its programs in the humanities and social sciences and in education, graduating the most teachers in the state of New Jersey annually, along with a physical therapy program which it holds in conjunction with the University of Medicine and Dentistry of New Jersey.[101]

The county also has Union County Vocational Technical Schools, which has both full-time magnet programs that students must apply to, and split-time vocational programs.

The top employers in 2011, according to the Union County Economic Development Corporation, were:[106]

The county is served by rail, air, highways and ports.

Passenger rail service is provide by NJ Transit via the Northeast Corridor, North Jersey Coast Line, Raritan Valley Line, the Morristown Line and the Gladstone Branch.[110][111][112][113][114] Freight service is provided by on Conrail's Lehigh Line and Chemical Coast Branch. Freight and passenger rail service was provided by the Rahway Valley Railroad from 1897 until 1992 when the short line closed due to lack of customers.[115]

NJ Transit provides bus service to the Port Authority Bus Terminal in Midtown Manhattan, as well as service to major cities in New Jersey and within Union County.[116]

The Port Newark-Elizabeth Marine Terminal is part of the Port Authority of New York and New Jersey.[117]

The southern portion of Newark Liberty International Airport is located in Elizabeth, within Union County.[118]

The City of Summit and the Summit Park Line Foundation are working on turning the line from Morris Avenue to Briant Park in Summit into a rail trail that will be approximately one mile long. This rail trail, potentially called the Summit Park Line, could provide a greenway to connect several county parks, akin to a Summit High Line.[120] A path could run directly from Summit to the Arthur Kill in Linden, New Jersey on the Rahway Valley Railroad and the Staten Island Rapid Transit line.

The Summit city council applied for a $1 million grant toward the Summit Park Line project in November 2016.[121] "If Summit is able to complete the project, it might help other parts of the greenway come through," said Union County Public Relations Coordinator, Sebastian Delia.[122]

The Rahway Valley Railroad runs from Summit to Roselle Park. Beginning in Hidden Valley Park, the railroad right-of-way continues by connecting Houdaille Quarry, Briant Park, Meisel Park, Rahway River Parkway, Galloping Hill Golf Course and Black Brook Park. The ending of the railway is on Westfield Avenue in Roselle Park. The Staten Island Rapid Transit runs from Cranford to Staten Island, although the project would only include the section that runs from Cranford to Linden.[122] The possible inception in Cranford would be a lot on South Avenue East. The ending of this trail would be in Linden at an empty lot. A boardwalk would run over the existing tracks to ease line reactivation. The 21 municipalities in Union County (with 2010 Census data for population, housing units and area) are:[123]

In 1869, the Union County Historical Society of New Jersey was incorporated. The society meets at the Hanson House in Cranford.[134]

The county has a sister city relationship with Wenzhou in Zhejiang, China.[150][151]