This article may be expanded with text translated from the corresponding article in French. (March 2022) Click [show] for important translation instructions. Machine translation like DeepL or Google Translate is a useful starting point for translations, but translators must revise errors as necessary and confirm that the translation is accurate, rather than simply copy-pasting machine-translated text into the English Wikipedia. Consider adding a topic to this template: there are already 4,944 articles in the main category, and specifying|topic= will aid in categorization. Do not translate text that appears unreliable or low-quality. If possible, verify the text with references provided in the foreign-language article. You must provide copyright attribution in the edit summary accompanying your translation by providing an interlanguage link to the source of your translation. A model attribution edit summary is Content in this edit is translated from the existing French Wikipedia article at [[:fr:Lockheed JetStar]]; see its history for attribution. You should also add the template ((Translated|fr|Lockheed JetStar)) to the talk page. For more guidance, see Wikipedia:Translation.
Executive transport jet by Lockheed

The Lockheed JetStar (company designations L-329 and L-1329; designated C-140 in US military service) is a business jet produced from the early 1960s to the 1970s. The JetStar was the first dedicated business jet to enter service, as well as the only such airplane built by Lockheed. It was also one of the largest aircraft in the class for many years, seating ten plus two crew. It is distinguishable from other small jets by its four engines, mounted on the rear of the fuselage, and the "slipper"-style fuel tanks fixed to the wings.

The dual engine pods on each side

The JetStar originated as a private project within Lockheed, with an eye to winning a United States Air Force (USAF) requirement that was later dropped due to budget cuts. Lockheed decided to continue the project on its own for the business market.[2]

The first two prototypes were equipped with two Bristol Siddeley Orpheus engines, the first of these flying on 4 September 1957. The second of these was also equipped with the wing-mounted "slipper tanks", which was originally to be an option. Lockheed attempted to arrange a contract to produce the Orpheus in the US, but when these negotiations failed it re-engined the second prototype with four Pratt & Whitney JT12s in 1959. The outer engines were mounted beside the inner ones, an arrangement that was later used on the Vickers VC10 and Ilyushin Il-62 airliners. The slipper tanks were removed and placed on the first prototype. The JT12 fit proved successful and was selected for the production versions, the first of which flew in mid 1960.[3] These versions entered commercial service in 1961.

Noise regulations in the United States and high fuel consumption led to the development of the 731 JetStar, a modification program which added new Garrett TFE731 turbofan engines with a number of detail changes. It has redesigned larger external fuel tanks that sit with their upper surfaces flush with the wing, rather than being centered on it. The cockpit area has a somewhat more "modern" looking nose and window arrangement. The 731 JetStar modification program was so successful that Lockheed produced 40 new JetStars, designated the JetStar II, from 1976 to 1979. The JetStar IIs were factory-new aircraft with the turbofan engines and revised external fuel tanks. Both 731 JetStars and JetStar IIs have greatly increased range, reduced noise, and better runway performance compared to the original JetStars.

JetStar production totaled 204 aircraft by final delivery in 1978.[4] Most original JetStars have been retired, but many 731 JetStars and JetStar IIs are still flying in various roles, mainly as corporate and private jets.

USAF VC-140B from below, showing its wing sweep and slipper tanks Cockpit of a Lockheed L-1329 Jetstar

The JetStar has a fairly typical business jet design layout, with a swept wing and a cruciform tail. The wing has a 30° sweepback and features large fuel tanks at about half-span, extending some distance in front and behind the wing. The wings hold 10,000 pounds of fuel, and each slipper tank holds 4,000 pounds of fuel for a total fuel load of 18,000 pounds. The wing also includes leading edge flaps (not slats) along the front of the wing outboard of the tanks (these leading edge flaps reduce the stalling speed by an additional three knots), while double-slotted trailing edge flaps span the entire rear surface inboard of the ailerons. The wing incorporates inflatable rubber deicing boots for the removal of ice accumulated in flight. The horizontal stabilizer is mounted nearly halfway up the fin to keep it clear of the engines' jet blast. One feature is that the horizontal stabilizer is trimmable by pivoting the entire tail fin and stabilizer assembly, which has a distinctive unpainted area at the base of the fin that is noticeable in most pictures. The JetStar does not have any tail deicing capability, nor was it required for certification. A speed brake is located on the underside of the fuselage to aid deceleration for landing. The original prototypes used a tricycle landing gear with one wheel per leg, but after an accident in 1962 the nose gear was modified with two tires.[4]

The first prototype served as the personal transport of Lockheed's Vice President of Advanced Development Projects Kelly Johnson for some time. Elvis Presley owned two JetStars at different times; the second was named Hound Dog II and is on display at Graceland. Frank Sinatra also owned one.[citation needed] Additionally, one JetStar belonged to U.S.President Richard Nixon, then to the Shah of Iran and finally, to Puerto Rican boy band Menudo.

Sixteen JetStars were produced for the USAF; five C-140As were flight inspection aircraft for the Air Force Communications Service and were used to perform airborne testing of airport navigational aids (navaids) from 1962 onwards. They began service during the Vietnam War and remained in service until the early 1990s. The "Flight Check" C-140As were combat-coded aircraft that could be distinguished from the VIP transport version by their distinctive paint scheme. The C-140As were deployed to southeast Asia during the Vietnam War, where, in addition to their more usual navaid testing, they would loiter off the coast and act as communications relays between the Pentagon and the battlefield.[6] The last C-140A to be retired was placed on static display at Scott AFB, Illinois.[citation needed]

An additional eleven airframes were designated C-140B, although the first of these predated the C-140As when it was delivered in 1961. The C-140Bs were used to transport personnel by the Military Airlift Command. Six of the aircraft were operated as VIP transports by the 89th Military Airlift Wing at Andrews Air Force Base. These VIP aircraft were designated as VC-140Bs. During the presidency of Jimmy Carter, he used a dedicated VC-140B extensively for short trips and it was known within the Special Air Missions Wing as "Peanut One." Upon retirement, one airframe (#89001) was placed on a static pedestal in front of the Joint Base Andrews air terminal. Members of the VIP transport fleet occasionally served as Air Force One during the 1970s and 1980s. Several other countries, such as Germany and Canada, have used military JetStars as transports for their heads of state, heads of government, and other VIPs.

The last operational JetStar (N313JS) was retired in December 2019 and preserved in Marietta.[7] However, in November 2020, a Jetstar II (N700RM) was flown from Texas to Oregon.[8] That particular aircraft will be disassembled in Klamath Falls.[citation needed] In December 2020, another Jetstar II (N710RM) was also ferried from Conroe, Texas to Klamath Falls, Oregon.[9] The first JetStar transported Kelly Johnson, displayed at the Museum of Flight near Seattle 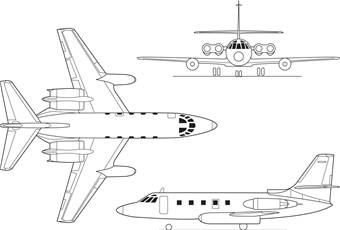