Finnic language south of Lake Onega, Russia
This article or section should specify the language of its non-English content, using ((lang)), ((transliteration)) for transliterated languages, and ((IPA)) for phonetic transcriptions, with an appropriate ISO 639 code. Wikipedia's multilingual support templates may also be used. See why. (May 2019)

Veps, also known as Vepsian (Veps: vepsän kelʹ, vepsän keli, or vepsä), is a Finnic language from the Uralic language family, that is spoken by Vepsians. The language is written in the Latin script, and is closely related to Finnish and Karelian.

According to Soviet statistics, 12,500 people were self-designated ethnic Veps at the end of 1989.

According to the location of the people, the language is divided into three main dialects: Northern Veps (at Lake Onega to the south of Petrozavodsk, to the north of the river Svir, including the former Veps National Volost), Central Veps (in the East of the Leningrad Oblast and Northwest of the Vologda Oblast), and Southern Veps (in the Leningrad Oblast). The Northern dialect seems the most distinct of the three; however, it is still mutually intelligible for speakers of the other two dialects. Speakers of the Northern dialect call themselves "Ludi" (lüdikad), or lüdilaižed.

In Russia, more than 350 children learn the Veps language in a total of five national schools.[3] 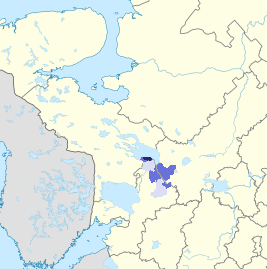 Veps has been called the "Sanskrit of the Finnic languages", because it retains many archaic features.[4]

Flag of the Vepsian people

Veps is the easternmost surviving member of the Finnic languages. Having developed in relative isolation, the language lacks several features found in its relatives, such as consonant gradation and the length contrast in consonants. Original vowel length has mostly been lost as well (with the exception of Northern Veps, which retains ii and uu). At the same time, it retains a number of archaic features.

The closest relative of Veps is Ludic, connecting Veps to the wider Finnic dialect continuum.

Veps also shows some characteristic innovations such as the vocalization of original syllable-final *l, and the expansion of the local case system.

According to Ethnologue there were 3,160 speakers of Veps in 2010, located in the Republic of Karelia and in the Leningrad and Vologda Oblasts.[5]

Characteristics of Northern Veps are:

Central Veps dialects are rather distinct from each other compared to Northern and Southern Veps, which are relatively homogeneous. They are spoken around a long line stretching from Tervenichey in the Lodeinopolsky District of Leningrad Oblast, to near Lake Beloye. The largest locality speaking Central Veps dialects is Vinnitsy.

Characteristics of Central Veps are:

Southern Veps is spoken in the Boksitogorsky District of Leningrad Oblast, including the villages of Radogoshcha and Sidorovo [ru].

Characteristics of Southern Veps are:

There are some cases where the front vowel /i/ is preceded by a non-palatalized consonant. In native Finnic vocabulary, this occurs where inflectional endings beginning with /i/ are attached to words with a stem ending in a non-palatalized consonant. The consonant is not palatalized by /i/ in this case, but remains non-palatalized by analogy with the other inflected forms. The vowel /i/ is backed to [ɨ] in this case, as in Russian, making it unclear whether the palatalization is a consequence of the front vowel, or the backing is the result of the lack of palatalization. Either analysis is possible.

Russian loanwords have also introduced instances of non-palatalized consonants followed by /i/, which are much more frequent in that language.

The phoneme /e/ can also in some cases be preceded by non-palatalized consonants, for example in the allative ending -le.

The status of /ɨ/ is marginal; it occurs as an allophone of /i/ after a non-palatalized consonant. See above under "Palatalization" for more information. It does not occur in the first syllable of a word.

Like many other Finnic languages, Veps has vowel harmony but in a much more limited form. Words are split into back-vowel and front-vowel words based on which vowels they contain:

However, the front vowels can only occur in the first two syllables of a word. In a third or later syllable, and also sometimes in the second syllable, they are converted to the corresponding back vowel. Thus, vowel harmony only applies (inconsistently) in the second syllable, and has been lost elsewhere. It is not applied for inflectional endings except in a few exceptional cases, but is retained more frequently in derivational endings.

The modern Vepsian alphabet is a Latin alphabet.[8] It consists of a total of twenty-nine characters: twenty-two are from the basic modern Latin alphabet, six are derived from basic Latin letters by the addition of diacritical marks, and the final character is the apostrophe, which signifies palatalization of the preceding sound.

Veps orthography is largely phonemic, and represents each phoneme with one letter. Palatalized consonants are single phonemes, and thus the combination of a letter and a following apostrophe is a single combined letter for this purpose. The following table shows the correspondences between letters and phonemes:

Like other Finnic languages, Veps is an agglutinating language. The preservation of the Proto-Finnic weak-grade consonants *d and *g in all positions, along with the loss of consonant gradation, has made Veps morphology relatively simple compared to the other Finnic languages. There are fewer inflectional classes, and inflections of nominals and verbs alike can be predicted from only a few basic principal parts.

Veps has twenty-three grammatical cases, more than any other Finnic language. It preserves the basic set of Finnic cases shared by most Finnic languages, including the six locative cases, but several more cases have been added that generally have no counterpart in the others.

Nouns have four principal parts, from which all other noun forms can be derived by replacing the endings:

If the genitive singular stem has h before the final vowel, then the ending -ze (-že after i) is used, and the vowel is never dropped:

Veps has innovated a special reflexive conjugation, which may have middle voice or passive voice semantics. The endings are as follows:

The original Finnic present active participle is falling out of use, and is preserved only for a few verbs, as -b (stem -ba-).

The personal pronouns are of Finno-Ugric origin: Article 1 of the Universal Declaration of Human Rights:

(English version: All human beings are born free and equal in dignity and rights. They are endowed with reason and conscience and should act towards one another in a spirit of brotherhood).[10]