Islamic holiday on the 10th day of Dhu al-Hijjah

Eid al-Adha (Arabic: عيد الأضحى, romanized: ʿĪd al-ʾAḍḥā, lit. 'Feast of the Sacrifice') is the second and the bigger of the two main holidays celebrated in Islam (the other being Eid al-Fitr). It honors the willingness of Ibrahim (Abraham) to sacrifice his son Ismail (Ishmael) as an act of obedience to Allah's command. Before Ibrahim could sacrifice his son, however, Allah provided him with a lamb which he was supposed to kill in his son's place because of his willingness to sacrifice his own son in the name of God. In commemoration of this intervention, animals are ritually sacrificed. Part of their meat is consumed by the family which offers the animal, while the rest of the meat is distributed to the poor and the needy. Sweets and gifts are given, and extended family members are typically visited and welcomed.[6] The day is also sometimes called the Greater Eid.[7]

In the Islamic lunar calendar, Eid al-Adha falls on the 10th day of Dhu al-Hijjah and lasts for four days. In the international (Gregorian) calendar, the dates vary from year to year, shifting approximately 11 days earlier each year.

The Arabic word عيد (ʿīd) means 'festival', 'celebration', 'feast day', or 'holiday'. It itself is a triliteral root ‏عيد‎ with associated root meanings of "to go back, to rescind, to accrue, to be accustomed, habits, to repeat, to be experienced; appointed time or place, anniversary, feast day".[9][10] Arthur Jeffery contests this etymology, and believes the term to have been borrowed into Arabic from Syriac, or less likely Targumic Aramaic.[11]

The holiday is called عيد الأضحى (Eid-ul-Adha) or العيد الكبير (Eid-ul-Kabir) in Arabic.[12] The words أضحى (aḍḥā) and قربان (qurbān) are synonymous in meaning 'sacrifice' (animal sacrifice), 'offering' or 'oblation'. The first word comes from the triliteral root ضحى (ḍaḥḥā) with associated meanings of "immolate ; offer up ; sacrifice ; victimize".[13] No occurrence of this root with a meaning related to sacrifice occurs in the Qur'an[9] but in the Hadith literature. Arab Christians use the term to mean the Eucharistic host. The second word derives from the triliteral root ‏‏قرب‎‎ (qaraba) with associated meanings of "closeness, proximity... to moderate; kinship...; to hurry; ...to seek, to seek water sources...; scabbard, sheath; small boat; sacrifice".[10] Arthur Jeffery recognizes the same Semitic root, but believes the sense of the term to have entered Arabic through Aramaic.[11] The word is still used by Aramaic Christians for the Communion service, see Eucharist above. Compare Hebrew korban קָרבן (qorbān).

One of the main trials of Ibrahim's life was to face the command of Allah by killing his beloved son. According to the new narrative, Ibrahim kept having nightmares that he was sacrificing his son Ismail son of Hajar. Ibrahim knew that this was a command from Allah and he told his son, as stated in the Quran "Oh son, I keep dreaming that I am slaughtering you", Ismail replied "Father, do what you are ordered to do." Ibrahim prepared to submit to the will of Allah and prepare to slaughter his son as an act of faith and obedience to Allah.[14] During the preparation, Shaytaan tempted Ibrahim and his family by trying to dissuade them from carrying out Allah's commandment, and Ibrahim drove Satan away by throwing pebbles at him. In commemoration of their rejection of Satan, stones are thrown at symbolic pillars ,symbolising the place where Satan tried to dissuade Ibrahim, during Hajj rites.[15]

Acknowledging that Ibrahim was willing to sacrifice what is dear to him, Allah the Almighty honoured both Ibrahim and Ismail. Angel Jibreel called Ibrahim "O' Ibrahim, you have fulfilled the revelations." and a lamb from heaven was offered by Angel Jibreel to prophet Ibrahim to slaughter instead of Ismail. Muslims worldwide celebrate Eid al Adha to commemorate both the devotion of Ibrahim and the survival of Ismail.[16][17][18]

This story is known as the Akedah in Judaism (Binding of Isaac) and originates in the Torah,[19] the first book of Moses (Genesis, Ch. 22). The Quran refers to the Akedah as follows:[20]

100 My Lord! Bless me with righteous offspring.”
101 So We gave him good news of a forbearing son.
102 Then when the boy reached the age to work with him, Abraham said, “O my dear son! I have seen in a dream that I ˹must˺ sacrifice you. So tell me what you think.” He replied, “O my dear father! Do as you are commanded. Allah willing, you will find me steadfast.”
103 Then when they submitted ˹to Allah’s Will˺, and Abraham laid him on the side of his forehead ˹for sacrifice˺,
104 We called out to him, “O Abraham!
105 You have already fulfilled the vision.” Indeed, this is how We reward the good-doers.
106 That was truly a revealing test.
107 And We ransomed his son with a great sacrifice,
108 and blessed Abraham ˹with honourable mention˺ among later generations:
109 “Peace be upon Abraham.”
110 This is how We reward the good-doers.
111 He was truly one of Our faithful servants.
112 We ˹later˺ gave him good news of Isaac—a prophet, and one of the righteous.

The word "Eid" appears once in Al-Ma'ida, the fifth surah of the Quran, with the meaning "a festival or a feast".[21]

The tradition for Eid al-Adha involves slaughtering an animal and sharing the meat in three equal parts – for family, for relatives and friends, and for poor people. The goal is to make sure every Muslim gets to eat meat.[22][23]

Eid prayers must be offered in congregation. Participation of women in the prayer congregation varies from community to community.[25] It consists of two rakats (units) with seven takbirs in the first Raka'ah and five Takbirs in the second Raka'ah. For Shia Muslims, Salat al-Eid differs from the five daily canonical prayers in that no adhan (call to prayer) or iqama (call) is pronounced for the two Eid prayers.[26][27] The salat (prayer) is then followed by the khutbah, or sermon, by the Imam.[28]

At the conclusion of the prayers and sermon, Muslims embrace and exchange greetings with one another (Eid Mubarak), give gifts and visit one another. Many Muslims also take this opportunity to invite their friends, neighbours, co-workers and classmates to their Eid festivities to better acquaint them about Islam and Muslim culture.[29]

Wishes of Eid from Senegal During Eid ul-Adha, distributing meat amongst the people, chanting the takbir out loud before the Eid prayers on the first day and after prayers throughout the four days of Eid, are considered essential parts of this important Islamic festival.[30]

The takbir consists of:[31]

Men, women, and children are expected to dress in their finest clothing to perform Eid prayer in a large congregation in an open waqf ("stopping") field called Eidgah or mosque. Affluent Muslims who can afford it sacrifice their best halal domestic animals (usually a camel, goat, sheep, or ram depending on the region) as a symbol of Abraham's willingness to sacrifice his only son.[32] The sacrificed animals, called aḍḥiya (Arabic: أضحية), known also by the Perso-Arabic term qurbāni, have to meet certain age and quality standards or else the animal is considered an unacceptable sacrifice.[33] In Pakistan alone nearly ten million animals are sacrificed on Eid days, costing over $2 billion.[34]

The meat from the sacrificed animal is preferred to be divided into three parts. The family retains one-third of the share; another third is given to relatives, friends, and neighbors; and the remaining third is given to the poor and needy.[32]

Eid al-Adha in the Gregorian calendar 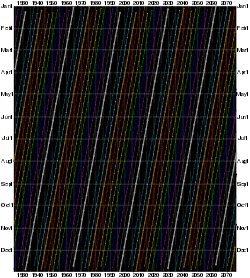 Conversion of Hijri years 1343 to 1500 to the Gregorian calendar, with first days of al-Muharram (brown), Ramadan (grey) and Shawwal (black) bolded, and Eid al-Adha dotted – in the SVG file, hover over a spot to show its dates and a line to show the month

The following list shows the official dates of Eid al-Adha for Saudi Arabia as announced by the Supreme Judicial Council. Future dates are estimated according to the Umm al-Qura calendar of Saudi Arabia.[3] The Umm al-Qura calendar is just a guide for planning purposes and not the absolute determinant or fixer of dates. Confirmations of actual dates by moon sighting are applied on the 29th day of the lunar month prior to Dhu al-Hijjah[37] to announce the specific dates for both Hajj rituals and the subsequent Eid festival. The three days after the listed date are also part of the festival. The time before the listed date the pilgrims visit Mount Arafat and descend from it after sunrise of the listed day.[38]

In many countries, the start of any lunar Hijri month varies based on the observation of new moon by local religious authorities, so the exact day of celebration varies by locality.