Ultranationalism or extreme nationalism is an extreme form of nationalism in which a country asserts or maintains detrimental hegemony, supremacy, or other forms of control over other nations (usually through violent coercion) to pursue its specific interests.[1][2][3] Ultranationalist entities have been associated with the engagement of political violence even during peacetime.[4]

In ideological terms, scholars such as British political theorist Roger Griffin have found that ultranationalism arises from seeing modern nation-states as living organisms directly akin to physical people such that they can decay, grow, die, and additionally experience rebirth. Political campaigners have divided societies in stark mythological ways between those perceived as degenerately inferior and those perceived as a part of a great cultural destiny. Ultranationalism is an aspect of fascism, with historic governments such as the regime of Nazi Germany building on ultranationalist foundations using specific plans of supposed widespread national renewal.[3]

According to Janusz Bugajski, "in its most extreme or developed forms, ultra-nationalism resembles fascism, marked by a xenophobic disdain of other nations, support for authoritarian political arrangements verging on totalitarianism, and a mythical emphasis on the 'organic unity' between a charismatic leader, an organizationally amorphous movement-type party, and the nation".[5]

British political theorist Roger Griffin has stated that ultranationalism is essentially founded on xenophobia in a way that finds supposed legitimacy "through deeply mythicized narratives of past cultural or political periods of historical greatness or of old scores to settle against alleged enemies". It can also draw on "vulgarized forms" of different aspects of the natural sciences such as anthropology and genetics, eugenics specifically playing a role, in order "to rationalize ideas of national superiority and destiny, of degeneracy and subhumanness" in Griffin's opinion. Ultranationalists view the modern nation-state as, according to Griffin, a living organism directly akin to a physical person such that it can decay, grow, die, and additionally experience rebirth. He has highlighted Nazi Germany as a regime founded on ultranationalism.[3] 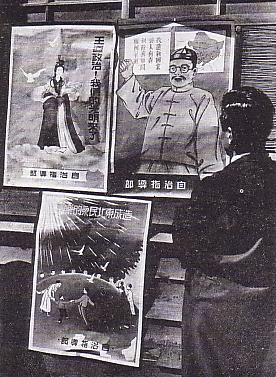 U.S. historian Walter Skya has written in Japan’s Holy War: The Ideology of Radical Shinto Ultranationalism that ultranationalism in Japan drew upon traditional Shinto spiritual beliefs and militaristic attitudes regarding the nation's racial identity. By the early twentieth century, fanaticism arising from this combination of ethnic nationalism and religious nationalism caused opposition to democratic governance and support for Japanese territorial expansion. Skya particularly noted in his work the connection between ultranationalism and political violence by citing how, between 1921 and 1936, three serving and two former Prime Ministers of Japan were assassinated. The totalitarian Japanese government of the 1930s and 1940s relied not just on encouragement by the country's military but additionally enjoyed widespread popular support.[4]

Israeli political journalist Gideon Levy wrote in late 2015 that the Israeli-Palestinian conflict has led to a decay in the civil society within Israel, with an ultranationalist movement that "bases its power on incitement to hatred" using "folkloric religion" gaining ground over decades such that:

"They were the only ones willing to fight for a collective goal. They did not rule out any means. They extorted and exploited the weaknesses of government, the guilt feelings and confusion of the secular camp, and they won. They did so systematically and smartly: First they established the foundation of their existence, the settlement enterprise. After they achieved their goal– the killing off of any diplomatic agreement and destruction of the two-state solution– they were free to turn to their next target: taking control of the public debate in Israel on the road to changing its power structure, character and substance."[6]

Russian irredentism in which a militant imperial state is proposed that stretches across both Asia and Europe without regard for current international borders has been described as ultranationalism by the U.S. publication Los Angeles Times, with the aggressive actions of Russian President Vladimir Putin being credited as an evolution of political arguments by multiple figures from the past. Examples include Nikolai Berdyaev, Aleksandr Dugin (the author of 1997's The Foundations of Geopolitics: The Geopolitical Future of Russia), Lev Gumilyov, and Ivan Ilyin. The newspaper highlighted the justifications given in support of the 2022 Russian invasion of Ukraine, quoting Putin's declaration that he must militarily combat an "empire of lies" created by the U.S. to suffocate Russia.[7]

The absolute dictatorship of Romanian leader Nicolae Ceausescu has been described as an example of communism taking an ultranationalist approach by Haaretz. The Israeli publication cited the antisemitism of the dictator in terms of actions such as his historical denialism about the Holocaust. Ceausescu additionally took efforts to purge those of Jewish background from political authority.[8]

Haaretz has also labeled Hungarian Prime Minister Viktor Orban as an ultranationalist given that leader's views on autocratic rule and racial identity, particularly Orban's public condemnation of "race-mixing".[8] He's also been called as such as by NPR, an American news agency, with the politician's inherent opposition to democratic liberalism as a concept being cited.[9]

The business-centered publication Bloomberg News stated in a 2021 story that the rise of ultranationalist viewpoints in China, particularly in terms of those who advocate for extremism on social media, presents a direct challenge to the current government of the nation, with General Secretary Xi Jinping facing opposition in his attempts to set forth climate change related economic reforms about greenhouse gases. Chinese political activists have asserted, according to the publication, a conspiracy theory that said reforms represent some kind of capitulation to foreign interests at the expense of China's citizens. Enviromentalist policies have come into being in a complex fashion inside China, facing complicated opinions among many.[10]

The following political parties have been characterised as ultranationalist.

The following political parties historically had ultranationalist tendencies or factions.