Nandurbar district (Marathi pronunciation: [nən̪d̪uɾbaːɾ]) is an administrative district in the northwest corner of Maharashtra state in India . On 1 July 1998 Dhule was bifurcated as two separate districts now known as Dhule and Nandurbar. Nandurbar is a tribal-dominated district , The district headquarters are located at Nandurbar city. The district occupies an area of 5955 km2 and has a population of 1,648,295 of which 16.71% were urban (as of 2011).[2]

There is one Lok Sabha constituency in the district which is Nandurbar (ST) reserved for Scheduled Tribes. There are four Maharashtra Assembly seats namely Akkalkuwa (ST), Shahada (ST), Nandurbar (ST), Nawapur (ST).

Nandurbar is a part of Satpuda Pradesh, meaning Seven Hills Region. The district was part of the district with Dhule and Jalgaon till July 1998. The ancient name of this region is Rasika, when Nandurbar was also called Nandanagri after the name of its king Nandaraja.[4]

The district is also rich with mythological accounts of the Ramayana, where the region is referred to as 'Krushik'.

The region is linked to various rulers of the time including bhil , Chalukyas, Vartakas and Yadavas.

Prior to Mughal era, formed the southern boundary of the Tughlaq Empire.

The Shinde/Scindia (Sarpatils) of Khandesh.[5][6][7] Who came from Amirgarh (Present in Rajasthan) as Rao of West Khandesh in and 14th century. In past they are Rai Amirgarh and ancestors of Sindh's Royal Family. They control Khandesh from Laling fort and Dhanur & Dhule Towns. In 1600s Jadhavrao lost ruling power against Mughal but after some time later Rao Shinde recaptured Khandesh with the help of Maratha Empire. In end of 1600s they came under Maratha Empire led by Chhatrapati Sambhaji and after some year later they lost the Administrative and Ruler power against Mughal Empire led by Aurangzeb in war.

Due to its strategic location at the ends of Gujarat and Madhya Pradesh, Nandurbar kept shifting into different power regimes. After the Mughal Empire's decline, the Marathas took control of Khandesh and subsequently on 3 June 1818 the Maratha Peshwa surrendered Khandesh to the British rule.

Nandurbar had its own share in the Indian struggle for independence. It was here that during the Quit India Movement of 1942 Shirish Kumar, a mere boy of 15 years, lost his life by a gun shot. A small memorial has been erected in memory of Shirish Kumar in the square where he shed his blood.

At entrance a beautiful statue of Chatrapati Shivaji Maharaj

It is a beautiful hill station which is around 80 km from the Nandurbar city.

In 2006 the Ministry of Panchayati Raj named Nandurbar one of the country's 250 most backward districts (out of a total of 640).[18] It is one of the twelve districts in Maharashtra currently receiving funds from the Backward Regions Grant Fund Programme (BRGF).[18]

Summer is from March to mid of June. Summers are usually hot and dry. During the month of May the summer is at its peak. Temperatures can be as high as 45° Celsius during the peak of Summer. The Monsoon sets in during the mid or end of June. During this season the weather is usually humid and hot. The northern and western regions receive more rainfall than the rest of the region. The average rainfall is 767 mm through the district.[20] Winter is from the month of November to February. Winters are mildly cold but dry. 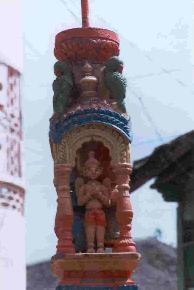