International organisation consisting of Russia and Belarus
This article may be expanded with text translated from the corresponding article in Russian. (December 2021) Click [show] for important translation instructions. View a machine-translated version of the Russian article. Machine translation like DeepL or Google Translate is a useful starting point for translations, but translators must revise errors as necessary and confirm that the translation is accurate, rather than simply copy-pasting machine-translated text into the English Wikipedia. Consider adding a topic to this template: there are already 2,629 articles in the main category, and specifying|topic= will aid in categorization. Do not translate text that appears unreliable or low-quality. If possible, verify the text with references provided in the foreign-language article. You must provide copyright attribution in the edit summary accompanying your translation by providing an interlanguage link to the source of your translation. A model attribution edit summary is Content in this edit is translated from the existing Russian Wikipedia article at [[:ru:Союзное государство]]; see its history for attribution. You should also add the template ((Translated|ru|Союзное государство)) to the talk page. For more guidance, see Wikipedia:Translation.

Russian postage stamp commemorating the Treaty between the Russian Federation and the Republic of Belarus establishing the Union on 2 April 1996.

Several further agreements were signed on 25 December 1998, with the intention of providing greater political, economic and social integration.[16]

Nevertheless, the nature of the political entity remained vague. Under pressure from his own political opponents, who argued for a reunion of the two states, and from Belarusian President Alexander Lukashenko, who sought to tie his excessively weak economy to Russia's stronger one, then Russian President Boris Yeltsin initiated the creation of the Union in order to harmonize the political and economic differences between the two nations.[17] According to some observers, Lukashenko's intention was also to gain great power, becoming the president of a future Russia-Belarus federation after Yeltsin's demise due to his all-time low popularity. However, after the resignation of Yeltsin, Vladimir Putin was elected in 2000 to succeed him as president of Russia, thus forcing Lukashenko to cancel his plans and keep balance between the independence of Belarus and Putin's increasing pressure for further integration among the two countries into the Union State.[18][19]

The Treaty on the Creation of a Union State of Russia and Belarus was signed on 8 December 1999.[20] The intention was to achieve a federation like the Soviet Union, with a common head of state, legislature, flag, coat of arms, anthem, constitution, army, citizenship and currency. The Union was ratified by the Russian State Duma on 22 December 1999 and the National Assembly of Belarus on 26 January 2000. On the latter date the Treaty and the Union came into effect.[21]

Then Kazakh President Nursultan Nazarbayev had put forward a similar proposal in 1994, envisioning the founding of a Eurasian union, but this proposal was not adopted until 29 May 2014 with the formation of the Eurasian Economic Union.[22]

The Union State based on its founding treaties has exclusive jurisdiction over the creation of a single economic space and legal foundations for a common market, monetary union, single tax and pricing policy, unified development and procurement of defense equipment, unified system of technical support for the armed forces. Common command of regional military is further realized through many other documents based on this Union State jurisdiction,[27] common border policy and other jurisdictions.[5]

Pavel Borodin was the first State Secretary of the Union. He was first appointed by the Supreme State Council on 26 January 2000 for a four-year term. In 2004 and 2008 his term was renewed for an additional four years, leaving office in 2011. Since then the office has been held by Grigory Rapota.[citation needed]

Supreme State Council makes decisions on issues regarding the security of the member states of the Union including their collective protection from outside threats, the protection of the Union's borders, military development, and many other issues.

Court of Union should consist of nine judges appointed for six-year terms. But while provisions for court are given in adopted treaty court was not formed.[34]

Accounting Chamber, is tasked with controlling the implementation of the Union State budget. It consists of 11 members[35] appointed for a period of 6 years from among the citizens of the member states who have experience in control and audit who are appointed by the Parliament of the Union State on the proposal of the Council of Ministers. The Accounting Chamber establishes its own regulations, which are approved by the Council of Ministers.

Shortly after its inauguration, both member states seemed to have lost their enthusiasm for the Union, with first Russia, and then Belarus, restoring customs controls along their common border in 2001, effectively suspending the customs union until it was restored in 2010. Plans had also been set in motion to implement a common currency across the Union, but these have been postponed several times.

On 16 November 2010, it was announced by the Union State website that the Constitutional Act was 99% ready.[36]

Belarusian President Alexander Lukashenko promised to introduce a common currency on 1 January 2004. The currency was not introduced, and the plan was pushed back by one year. On 1 January 2005, the Union State again failed to introduce a common currency, and it was again postponed by one year, which, in 2006, happened once again. During a press-conference in Minsk on 2 February 2006, Pyotr Prokopovich, chief of the National Bank of Belarus, announced that a "common currency might be introduced in 2007". This, however, failed to occur in 2007. The National Bank of the Republic of Belarus announced that, starting in 2008, the Belarusian rubel would be tied to the United States dollar instead of the Russian rouble.[37]

Citizenship and freedom of migration

Union State grants citizenship to citizens in both states meaning that every citizen of the Russian Federation and every citizen of the Republic of Belarus is at the same time a citizen of the Union with the guaranteed right to move and reside freely within the territory of the other party, allowing Belarusian citizens to travel freely in Russia and have the right to settle there to work or study, and vice versa including possession, use and disposal of property on the territory of another state.[38] The Union State does provide citizens of Russia and Belarus the right to work and permanently settle in either country without formal immigration procedures otherwise mandatory for foreign nationals. They retain their national passports and other identification papers.

On 10 February 2009, Russia and Belarus implemented the first stage of joint military officer training programs designed to integrate the military structures of the countries. This military collective is called the Regional Forces Group of Belarus and Russia (RGF). The goal of these operations is to ensure cohesive training, practice and implementation of military interests for the nations, and were aimed at strategic and battle training taking place in February and March 2009.[39] Furthermore, the military doctrine of the Russian Federation provides that "an armed attack on the state-participant in the Union State, as well as all other actions involving the use of military force against it," should be deemed "an act of aggression against the Union State", authorizing Moscow to "take measures in response".[40]

Since the formation of the Union State in 1997, Belarus and Russia have thus far failed to institute any symbols or even a flag for the Union State. There have, however been several proposals for flags and coats of arms.[41][42]

Two proposals have been made for the flag of the Union. In all cases, they are modifications to the flag of the Soviet Union, but representing the state (not communism). In both cases, two gold stars are placed in the canton of the red flag (to represent the two states of the Union).[42]

A proposed coat of arms is a modification of the double-headed eagle holding the coats of arms of Russia and Belarus.[41]

A song called "Sovereign Union of Nations" (Russian: Державный союз народов Derzhavny soyuz narodov, Belarusian: Дзяржаўны саюз народаў Dzyarzhauny sayuz narodau) has been proposed as the Union's unofficial anthem. The song, which was modified from the National Anthem of the Soviet Union, refers to a wider union of the two nations.[43]

Belarus and Russia had been collecting a value added tax (VAT), meant to finance the Union State, in the country of origin, but from 1 January 2005, VAT is collected in the country of destination, as in most other independent countries of the world. This change gave rise to a considerable degree of confusion and has disrupted many trade operations between Belarus and Russia. On 10 February 2005, private entrepreneurs in Belarus staged a one-day warning strike, protesting the new VAT scheme between the two countries and Lukashenko's economic policies. 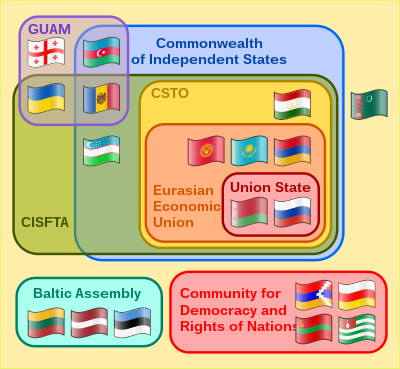 On 15 December 2006, talks over the Union State were heating up.[58] By January 2007, however, talks appeared to be stalled, as President Alexander Lukashenko of Belarus stated: "The Russian leadership is demanding that we join the Russian Federation—that's what is in the heads of the Russian leadership. I don't want to bury the sovereignty and independence of [Belarus]." He added: "From all the consultations and discussions, I have understood that we have different approaches and understandings of the building of a union state", and opposed "the possibility of the incorporation into Russia [of Belarus]".[59]

However, on 19 October 2007, Russian Prime Minister Viktor Zubkov announced that the budget of the Union State "will grow by no less than ten percent next year, and that growth will provide for worthy funding of our common projects."[60] This has led to speculation that the Russian government have renewed their interest in the idea.

A meeting between President Lukashenko of Belarus, President Vladimir Putin of Russia and Union State Secretary Pavel Borodin was held in Minsk 13–14 December 2007. This meeting received a considerable amount of media attention and raised speculation that a Union State might indeed be the focus of a new initiative by both governments. Of primary interest was renewed discussion of the Union Parliament (which, although planned, was never actually realized) and a Union State Constitutional Act, an instrument which could strengthen the authority of the Union. According to State Secretary Borodin, five variants of this Act were discussed at the meeting, each of which would involve a 7 to 10 year transitional period in the Union's development. Trade and energy issues were also discussed.[61]

On 27 May 2008, President Lukashenko, acting in his capacity as Chairman of the Supreme State Council named then Russian Prime Minister and current President Putin Chairman of the Council of Ministers.[62] This move raised speculation that the Union was about to undergo a significant political transformation. However, the most visible and arguably important official in the Union has been the State Secretary, who runs the Union State's day-to-day operations. In the same meeting, State Secretary Borodin announced that the 2009 Union State budget would total 6–7 billion roubles, an increase of over 2 billion roubles from 2008.

On 1 August 2011, Putin stated he supported a union of Russia, Belarus, and possibly South Ossetia.[63] Belarusian Foreign Minister spokesman Andrei Savinykh rejected the idea,[64] as did Dmitri Medojev, South Ossetia's ambassador to Moscow, who stated "Our people voted for independence in a referendum in 2006 and they do not relish the idea of becoming part of the Russian Federation."[64]

Since 2015, focus on developing relations between former members of the Soviet Union is on continued development of the Eurasian Economic Union (EAEU), itself a further development of the Eurasian Customs Union established in 2010. It is modeled on the integration of the European Union and comprises 5 member states: Belarus, Russia, Kazakhstan, Armenia and Kyrgyzstan. Tajikistan has also expressed an interest in joining. However, the EAEU is only an economic union, and at present, political integration remains within the remit of the Union State.

Deeper economic integration is proposed in 2021 within current talks of member states.[65] In November 2021, Russia and Belarus signed an agreement to provide for common policies on taxation, banking, industry, agriculture, and energy.[66]

On 18 March 2022, the Russian government announced that all restrictions on the movement of citizens between Russia and Belarus would be lifted.[67] On 1 July 2022, Russian President Vladimir Putin announced that the "unification" process has been accelerated to help alleviate the economic damage caused by sanctions due to the Russo-Ukrainian War.[68]