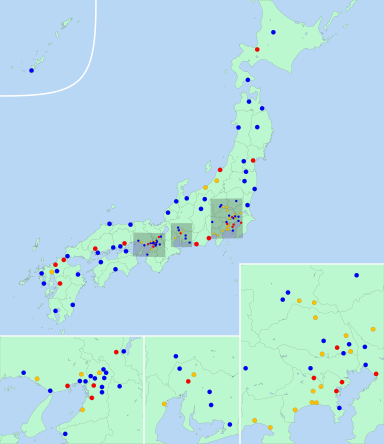 A core city (中核市, Chūkakushi) is a class or category of Japanese cities. It is a local administrative division created by the national government.[1] Core cities are delegated many functions normally carried out by prefectural governments, but not as many as designated cities. To become a candidate for core city status, a city must have a population greater than 300,000 and an area greater than 100 square kilometers, although special exceptions may be made by order of the cabinet for cities with populations under 300,000 but over 200,000.[2] After the abolition of special city status on April 1, 2015, any city with a population above 200,000 may apply for core city status.[3]

Application for designation is made by a city with the approval of both the city and prefectural assemblies.

The term "core city" was created by the first clause of Article 252, Section 22 of the Local Autonomy Law of Japan.[4]

Scheduled to become a core city

Cities that meet the requirements but have not yet been nominated

The following cities have populations greater than 200,000 but have not yet been nominated. (Cities planning to apply for core city status are not shown.)