This article needs additional citations for verification. Please help improve this article by adding citations to reliable sources. Unsourced material may be challenged and removed.Find sources: "Byblos syllabary" – news · newspapers · books · scholar · JSTOR (February 2020) (Learn how and when to remove this template message)

The Byblos script, also known as the Byblos syllabary, Pseudo-hieroglyphic script, Proto-Byblian, Proto-Byblic, or Byblic, is an undeciphered writing system, known from ten inscriptions found in Byblos, a coastal city in Lebanon. The inscriptions are engraved on bronze plates and spatulas, and carved in stone. They were excavated by Maurice Dunand, from 1928 to 1932, and published in 1945 in his monograph Byblia Grammata. The inscriptions are conventionally dated to the second millennium BC, probably between the 18th and 15th centuries BC.

Examples of the script have also been discovered in Egypt, Italy, and Megiddo (Garbini, Colless).

Description of the script

The Byblos script is usually written from right to left; word dividers are rarely used. The ten known inscriptions, named a to j in their order of discovery, are:

Inscription on spatula e. The handle of the spatula has broken off; four possible reconstructions of the damaged leftmost character of the inscription are given. 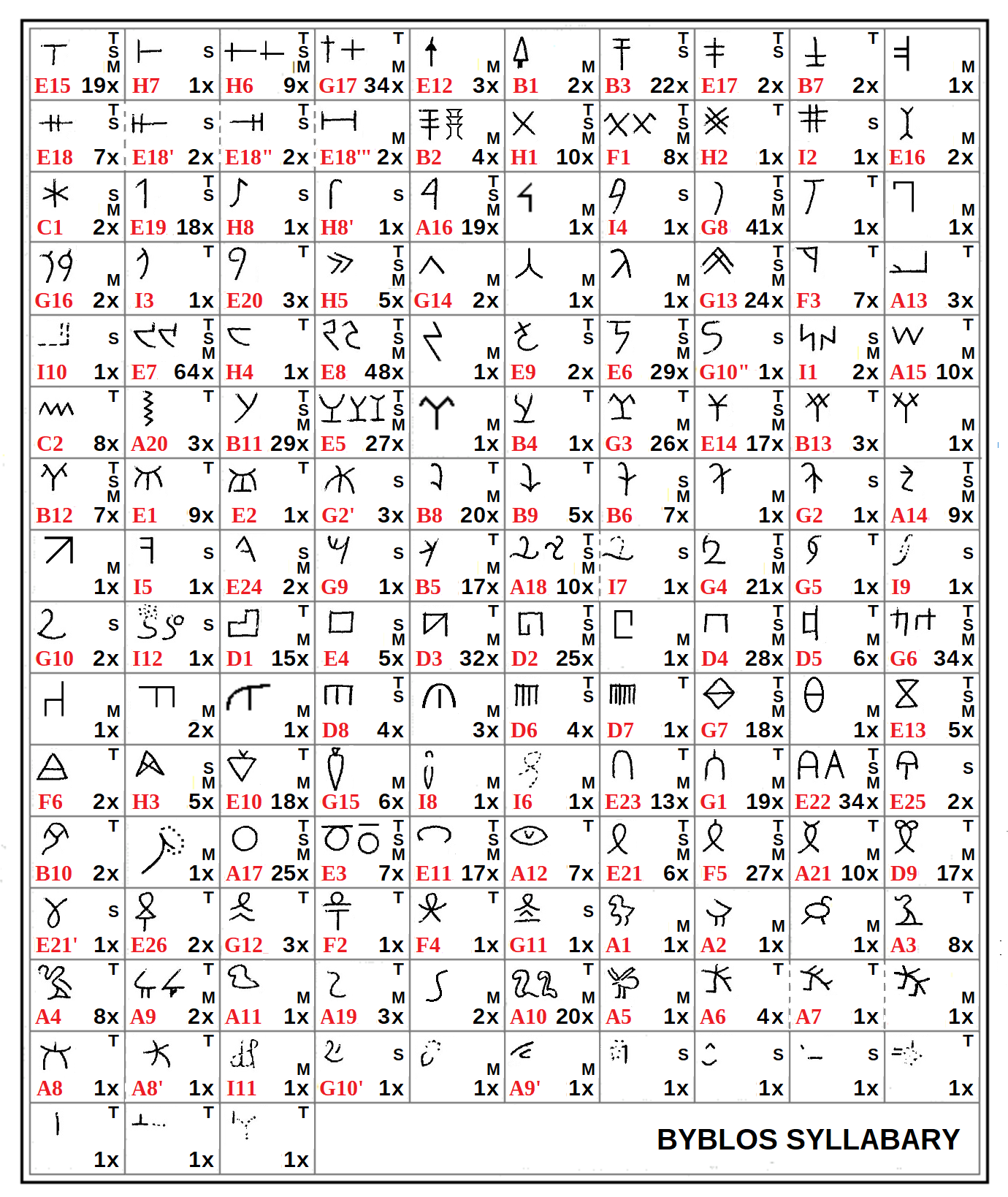 Each cell in the above table shows a sign (upper left), its Dunand code number (lower left), its frequency (lower right), and indicates (upper right) whether it was used on tablets (T), spatulas (S), or monuments (M). Signs in different cells may actually be writing variants of a single sign; for example, in the top row the signs H6, G17, and E12 are probably the same sign.

The ten main Pseudo-hieroglyphic inscriptions together contain 1046 characters, while the number of 'signs', that is different characters, is given by Dunand as 114. Garbini has noted that the latter number probably is too high, for two reasons. First, Dunand's sign list includes heavily damaged characters for which it is impossible to say whether they really constitute a new sign. Secondly, writing variants clearly existed, for example between the "monumental" style of the steles and the "linear" style of the spatulas and tablets. Taking these variants into account would reduce the total number of signs.

Garbini estimates the actual number of signs to be about 90. This number suggests the script to be a syllabary, where each character was pronounced as a syllable, usually a consonant-plus-vowel combination. If the number of consonants were between 22 (like the later Phoenician alphabet) and 28 (like Ugaritic) and if the number of vowels were three (the original Semitic vowels were a, i, and u) or four to six (if it included an e and o, or a mute vowel), then the total number of signs needed would be between 3×22=66 and 6×28=168, which is of the right order of magnitude for a syllabary.

Relation to other scripts

It has been observed that some signs, for example

, look like modified common Egyptian hieroglyphs, but there are many others which do not. According to Hoch (1990), many of the signs seem to derive from Old Kingdom hieratic, rather than directly from hieroglyphic. It is known that from as early as 2600 BC Egyptian influence in Byblos was strong: Byblos was the main export harbor for cedar wood to Egypt, and consequently there was a considerable Egyptian merchant community in Byblos. Thus it is plausible[attribution needed] that the syllabary was devised by someone in Byblos who had seen Egyptian hieroglyphs and used them freely as an example to compose a new syllabary that was better adapted to the native language of Byblos—just as in neighbouring Ugarit a few centuries later a cuneiform alphabet was devised that was easier to use than the complicated Akkadian cuneiform.

According to Brian Colless (2014), several signs resemble letters of the later Phoenician alphabet:

, and as many as 18 of the 22 letters of the Phoenician alphabet have counterparts in the syllabary. This would entail that the latter was derived in some way from the syllabary. Colless believes that the proto-alphabet evolved as a simplification of the syllabary, moving from syllabic to consonantal writing, in the style of the Egyptian script (which did not normally indicate vowels). Thus, in his view, the inscriptions are an important link between the Egyptian hieroglyphic script and the later Semitic abjads derived from Proto-Sinaitic.

The corpus of inscriptions is generally considered far too small to permit a systematic decipherment on the basis of an internal analysis of the texts. Yet already in 1946, one year after Dunand published the inscriptions, a claim for its decipherment was made, by Edouard Dhorme, a renowned Orientalist and former cryptanalyst from Paris. He noted that on the back of one of the inscribed bronze plates was a much shorter inscription ending in a row of seven nearly identical chevron-like marks, very much like our number "1111111". He assumed this to be a number (probably "seven", though Dhorme took it to be 4×10+3=43 because four marks were slightly larger than the other three), and guessed that the backside inscription as a whole contained a dating of the inscription.

The word directly before the seven "1" marks consists of four different signs:

. The first (rightmost) sign, damaged but recognizable, and the leftmost sign resemble the letters 'b' and 't', respectively, of the later Phoenician alphabet. Dhorme now interpreted the whole word ('b-..-..-t') as Phoenician "b(a) + š(a)-n-t", "in the year (of)" (Hebrew bišnat), which gave him the phonetic meanings of all four signs. These he substituted in the rest of the inscriptions, thereby looking for recognizable parts of more Phoenician words that would give him the reading of more signs. In the end he proposed transcriptions for 75 signs.

Harvey Sobelman did not try to find phonetic values for the various signs, but instead tried to determine word boundaries and find grammatical patterns, using linguistic techniques. Daniels' judgement is that Sobelman's "result should be taken into account in all future work on these texts."

Malachi Martin read the body of characters as an alphabet and categorized the various signs into 27 "classes". After publishing "part one" of his decipherment, in two volumes, he never published a sequel.

In 1985 a new translation attempt was published by George E. Mendenhall from the University of Michigan. Many signs that reappear in the later Phoenician alphabet were assumed by Mendenhall to have a similar phonetic value. For example, the sign

which in Phoenician has the value g (Hebrew gimel), is assumed to have the phonetic value ga. A sign

which resembles an Egyptian hieroglyph

meaning "King of Upper Egypt" is interpreted as "mulku" (Semitic for 'regal'; compare Hebrew mèlekh, 'king'), which furnished the phonetic reading mu. The latter example illustrates that Mendenhall extensively made use of the acrophonic principle, where the phonetic value of a syllabic sign is assumed to be equal to the initial sound of the (Semitic) word for the object that is depicted by the sign.

Mendenhall took the language to be very early ("Old Coastal") Semitic, from before the split between the Northwest Semitic (Phoenician, Hebrew) and South Semitic (Old South Arabian) language groups. He dated the texts to as early as 2400 BC. As noted earlier, James Hoch (1990) sees the source of the signs in Egyptian Old Kingdom characters (c. 2700–2200 BC) and so this West Semitic syllabary would have been invented in that period.

The translations proposed by Mendenhall are often cryptic: "Adze that Yipuyu and Hagara make binding. Verily, in accordance with that which Sara and Ti.pu established we will be surety. Further: with Miku is the pledge." (Spatula document F, which includes three witness marks). The text with the seven '1' marks, referred to above (Bronze Tablet C) is interpreted by Mendenhall as a marriage contract, where the marks are the "signatures" of seven witnesses. For Mendenhall, Document D (the longest text) is a covenant document between a king and his vassals. The decipherment should not be judged on the basis of Mendenhall's translations but on the plausibility of the texts his system reveals, and also whether his table of signs and sounds produces credible results on other inscriptions that were not included in his decipherment procedure.

Brian Colless (1992, 1998) supports Mendenhall's decipherment, and argues that the Megiddo signet-ring confirms it, reading (according to Mendenhall's identifications for the signs): "Sealed, the sceptre of Megiddo". This is just one indication that use of this script was not confined to Byblos. Inscriptions employing this West Semitic syllabary have also been found in Egypt.

Jan Best, a Dutch prehistorian and protohistorian, offered a decipherment of the Byblos syllabary after 40 years of research.[1] Reviews of his 2010 book Het Byblosschrift ontcijferd (The Byblos Script deciphered) were somewhat mixed. Best proposed that the syllabic Linear A Script from Crete had a number of Semitic characteristics. This idea encountered some resistance among those scholars who specialised in Ancient Greek. These scholars tended to believe that Crete was linked with the origins of the Hellenistic culture.[2]