Writing system for some Southern Bantu languages
This article relies too much on references to primary sources. Please improve this by adding secondary or tertiary sources. Find sources: "Ditema tsa Dinoko" – news · newspapers · books · scholar · JSTOR (November 2019) (Learn how and when to remove this template message)

Ditema tsa Dinoko (Sesotho for "Ditema syllabary"), also known by its IsiZulu name, Isibheqe Sohlamvu, and various other related names in different languages,[1][2] is a constructed writing system (specifically, a featural syllabary) for the siNtu or Southern Bantu languages (for example, for Sesotho, Setswana, IsiZulu, IsiXhosa, SiSwati, SiPhuthi, Xitsonga, EMakhuwa, ChiNgoni, SiLozi, or Tshivenḓa), developed in the 2010s from antecedent ideographic traditions of the Southern African region. Its visual appearance is inspired by these, including the traditional litema arts style.[3] It was developed between 2014 and 2016 by a group of South African linguists and software programmers with the goal of creating a denser writing system to avoid the slowness in reading caused by the word length and visual homogeneity of Southern Bantu languages written in the Roman alphabet.[4][5]

The Ditema / Isibheqe syllabary has the capacity to represent the full phonological range of these sintu languages (in the Nguni, Sotho-Tswana, Venḓa, Tsonga and Tonga-Inhambane groups) consistently under one orthography.[6] This includes languages that are unstandardised in the Latin alphabet such as the East Sotho languages (Sepulana, Sekutswe and Hipai), or the Tekela languages, which, with the exception of SiSwati, are not official languages. Orthographic support for these languages is for instance evidenced in the ingungwana grapheme, which indicates vowel nasality — a feature of Tekela languages.

Ditema tsa Dinoko in a stylized script, read left-to-right. The three syllables of first word are clustered, with the third syllable on the bottom

The script operates as a syllabary, as each freestanding symbol represents a syllable, with graphemes for consonant and vowel sounds combined into syllable blocks (amabheqe), in a similar fashion to Hangeul. When the syllable being represented is not a syllabic nasal, these symbols are formed from a triangular or chevron-shaped grapheme representing the nucleus of the syllable, with the attached ongwaqa or consonant graphemes representing the onset of the syllable or its mode of articulation.[7] Syllabic nasals are represented as circles that fill the whole ibheqe or syllable block.

The vowel graphemes (onkamisa) form the basis of each ibheqe or syllable block, as the nucleus of each syllable, with the ongwaqa or consonant graphemes positioned in and around them.

The direction of each ibheqe indicates the quality of the vowel for each of the seven vowel phonemes:

There is an eighth "vowel" represented by the downward facing chevron, which is an empty vowel, and is mostly used for foreign words to represent a standalone consonant, often as a syllable coda, which does not occur in siNtu languages having CV phonology.

The apex of the triangle or chevron corresponds to vowel height or frontedness, with high vowels /i/ and /u/ pointing upwards and the low vowel /a/ pointing downwards. Likewise, the front vowels /ɛ/ and /e/ point leftwards and the back vowels /ɔ/ and /o/ point rightwards. 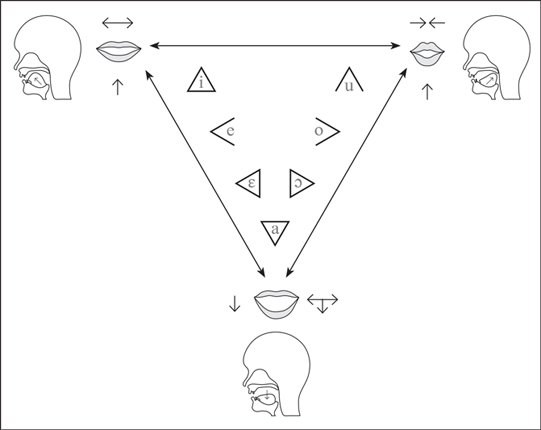 Vowel nasality is indicated with the ingungwana grapheme, which is a solid dot outside the triangle separated from the apex, as in the word phãsi below:

Consonants (ongwaqa) are composed of one or more graphemes, at least one of which indicates the place and manner of articulation and thereafter they represent co-articulations or onset clusters and the articulatory mode, whether it be voiced, prenasalised, implosive, ejective, modal, or a combination thereof.

The position of the consonant graphemes largely corresponds to the place of articulation:

The shape of the consonant grapheme corresponds to the manner of articulation:

Syllabic nasals or amaqanda are unique in that they occupy the entire ibheqe space as circles. They are distinguished from each other with lines inside them that operate according to the same principles as above. 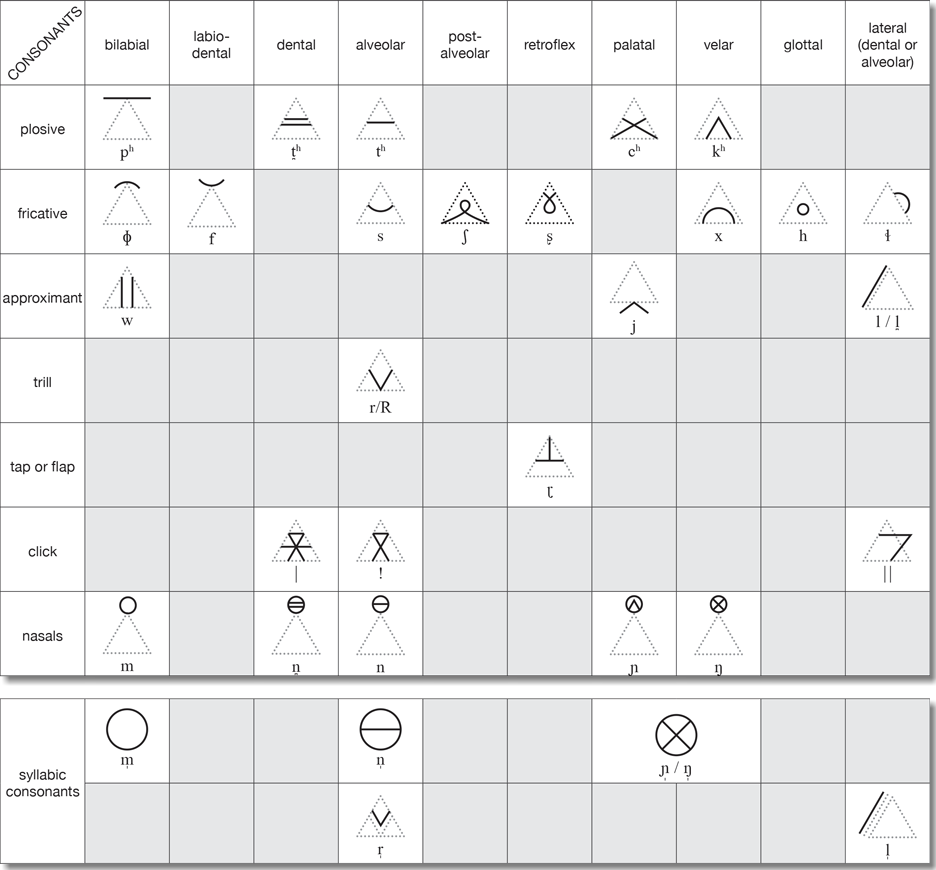 There are three graphemic markers of articulatory mode: