Clorazepate, sold under the brand name Tranxene among others, is a benzodiazepine medication. It possesses anxiolytic, anticonvulsant, sedative, hypnotic, and skeletal muscle relaxant properties. Clorazepate is an unusually long-lasting benzodiazepine and serves as a majoritive prodrug for the equally long-lasting desmethyldiazepam, which is rapidly produced as an active metabolite. Desmethyldiazepam is responsible for most of the therapeutic effects of clorazepate.[1]

Clorazepate is used in the treatment of anxiety disorders and insomnia. It may also be prescribed as an anticonvulsant or muscle relaxant.[3] It is also used as a premedication.[4]

Clorazepate is prescribed principally in the treatment of alcohol withdrawal and epilepsy, although it is also a useful anxiolytic because of its long half-life. The normal starting dosage range of Clorazepate is 15 to 60 mg per day. The drug is to be taken two to four times per day. Dosages as high as 90 to 120 mg per day may be used in the treatment of acute alcohol withdrawal. In the United States and Canada, Clorazepate is available in 3.75, 7.5, and 15 mg capsules or tablets. In Europe, tablet formations are 5 mg, 10 mg, 20 mg and 50 mg.[5] Clorazepate SD (controlled release) is available and may have a reduced incidence of adverse effects. The sustained-release formulation of clorazepate has some advantages in that, if a dose is missed, less profound fluctuations in blood plasma levels occur, which may be helpful to some people with epilepsy at risk of break-through seizures.[6]

Adverse effects of clorazepate include tolerance, dependence, withdrawal reactions, cognitive impairment, confusion, anterograde amnesia, falls in the elderly, ataxia, hangover effects, and drowsiness. It is unclear whether cognitive deficits resulting from the long-term use of benzodiazepines return to normal or persist indefinitely after withdrawal from benzodiazepines.[citation needed] Benzodiazepines are also known to cause or worsen depression. Paradoxical effects including excitement and paradoxical worsening of seizures can sometimes result from the use of benzodiazepines. Children, the elderly, individuals with a history of alcohol use disorder or a history of aggressive behavior and anger are at greater risk of developing paradoxical reactions to benzodiazepines.[6]

In September 2020, the U.S. Food and Drug Administration (FDA) required the boxed warning be updated for all benzodiazepine medicines to describe the risks of non-medical use, addiction, physical dependence, and withdrawal reactions consistently across all the medicines in the class.[7] 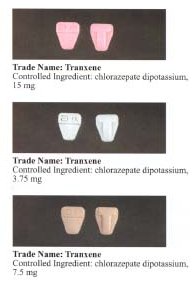 Benzodiazepines require special precaution if used in the elderly, children, alcohol- or drug-dependent individuals and individuals with comorbid psychiatric disorders.[10]

Clorazepate if used late in pregnancy, the third trimester, causes a definite risk of severe benzodiazepine withdrawal syndrome in the neonate with symptoms including hypotonia, and reluctance to suck, to apnoeic spells, cyanosis, and impaired metabolic responses to cold stress. Floppy infant syndrome and sedation in the newborn may also occur. Symptoms of floppy infant syndrome and the neonatal benzodiazepine withdrawal syndrome have been reported to persist from hours to months after birth.[11]

Clorazepate is a "classical" benzodiazepine. Other classical benzodiazepines include chlordiazepoxide, diazepam, clonazepam, oxazepam, lorazepam, nitrazepam, bromazepam and flurazepam.[12] Clorazepate is a long-acting benzodiazepine drug.[13] Clorazepate produces the active metabolite desmethyl-diazepam, which is a partial agonist of the GABAA receptor and has a half life of 20 – 179 hours; a small amount of desmethyldiazepam is further metabolised into oxazepam. Clorazepate exerts its pharmacological properties via increasing the opening frequency of the chloride ion channel of GABAA receptors. This effect of benzodiazepines requires the presence of the neurotransmitter GABA and results in enhanced inhibitory effects of the neurotransmitter GABA acting on GABAA receptors.[6] Clorazepate, like other benzodiazepines, is widely distributed and is highly bound to plasma proteins; clorazepate also crosses readily over the placenta and into breast milk. Peak plasma levels of the active metabolite desmethyl-diazepam are seen between 30 minutes and 2 hours after oral administration of clorazepate. Clorazepate is completely metabolised to desmethyl-diazepam in the gastrointestinal tract and thus the pharmacological properties of clorazepate are largely due to desmethyldiazepam.[6]

Clorazepate is used in the form of a dipotassium salt. It is unusual among benzodiazepines in that it is freely soluble in water.

Clorazepate can be synthesized starting from 2-amino-5-chlorobenzonitrile, which upon reaction with phenylmagnesium bromide is transformed into 2-amino-5-chlorbenzophenone imine.[14][15][16] Reacting this with aminomalonic ester gives a heterocyclization product, 7-chloro-1,3-dihydro-3-carbethoxy-5-phenyl-2H-benzodiazepin-2-one. Upon hydrolysis using an alcoholic solution of potassium hydroxide forms a dipotassium salt, chlorazepate.

In the United States, clorazepate is listed under Schedule IV of the Controlled Substances Act.