Shakumbhari devi,right side Bhima and Bhramari left side Goddess Shatakshi

In Hinduism, the yatra (pilgrimage) to the tirthas (sacred places) has special significance for earning the punya (spiritual merit) needed to attain the moksha (salvation) by performing the darśana (viewing of deity), the parikrama (circumambulation), the yajna (sacrificial fire offering), the Dhyana (spiritual contemplation), the puja (worship), the prarthana (prayer, which could be in the form of mantra - sacred chants, bhajan - prayer singing, or kirtan - collective musical prayer performance), the dakshina (alms and donation for worthy cause), the seva (selfless service towards community, devotees or temple), the bhandara (running volunteer community kitchen for pilgrims), etc. These sacred places are usually located on the banks of sacred waters, such as sacred rivers or their tributaries (among the rigvedic rivers of sapta sindhu the trio ganges-yamuna-saraswati are considered most scared), the kundas (pond or lake, among these the Lake Manasarovar is considered most scared), the ghats (water bodies with stairs such as Ghats in Varanasi), or the stepwells (among these the rani ki vav in the form of inverted temple is considered most spectacular), or the temple tanks.

In order of importance, in India there are 7 Sapta Puri holy cities, 4 Dhams (Char Dham) and 12 Jyotirlings devoted to the Lord Shiva, 51 Shakti Pithas devoted to the feminine manifestation of the god, and the important Lord Rama circuit (Ayodhya, Chitrakoot, Hampi and Rameswaram) and Lord Krishna circuit (Braj, Kurukshetra and Dwarka).

Holy Fairs: The Kumbh Mela (the "pitcher festival") is one of the holiest of Hindu pilgrimages that is held four times every twelve years; the location is rotated among the four cities of Prayagraj, Haridwar, Nashik, and Ujjain. The Mahamaham in temple town of Kumbakonam is also celebrated once in 12 years. Annual Gita Mahotsav at Kurukshetra, Shravani Mela at Deoghar, and Pitrapaksha Mela at Gaya are also notable holy fairs.

Holy Deity : Kuladaivat Hindu families have their own family patron deity. This deity is common to a lineage, a clan or a locality. 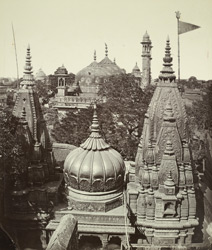 Varanasi is one of the main pilgrimage sites.