Overview of the traditions in Italy

Traditions of Italy are sets of traditions, beliefs, values, and customs that belongs within the culture of Italian people. These traditions have influenced life in Italy for centuries, and are still practiced in modern times. Italian traditions are directly connected to Italy's ancestors, which says even more about Italian history. Christmas in Italy (Italian: Natale) begins on 8 December, with the feast of the Immaculate Conception, the day on which traditionally the Christmas tree is mounted and ends on 6 January, of the following year with the Epiphany (in Italian: Epifania).[2] The term "Natale" derives from the Latin natalis, which literally means "birth",[3] and the Greetings formulas in Italian are buon Natale (Merry Christmas) and felice Natale (Happy Christmas).[4]

The tradition of the nativity scene comes from Italy. What is considered the first nativity scene in history (a living nativity scene) was set up by St. Francis Of Assisi in Greccio in 1223.[5] However, nativity scenes were already found in Naples in 1025.[5] In Italy, regional crib traditions then spread, such as that of the Bolognese crib [it], the Genoese crib [it] and the Neapolitan crib.

In southern Italy, living nativity scenes (presepe vivente) are extremely popular. They may be elaborate affairs, featuring not only the classic nativity scene but also a mock rural 19th-century village, complete with artisans in traditional costumes working at their trades. These attract many visitors and have been televised on RAI. In 2010, the old city of Matera in Basilicata hosted the world's largest living nativity scene of the time, which was performed in the historic center, Sassi.[6]

The tradition of the Christmas tree, of Germanic origin, was also widely adopted in Italy during the 20th century. It seems that the first Christmas tree in Italy was erected at the Quirinal Palace at the behest of Queen Margherita, towards the end of the 19th century.[2] In 1991, the Gubbio Christmas Tree, 650 meters high and decorated with over 700 lights, entered the Guinness Book of Records as the tallest Christmas tree in the world.[7]

Strenna or Strenna di Natale is a gift that is usually made or received in Italy at Christmas time. This custom comes from the tradition of ancient Rome which involved the exchange of gifts of good wishes during the Saturnalia, a series of festivities that took place each year between 17 and 23 December, in honor of the mythical god Saturn and preceding the day of the Natalis Solis Invicti. The term derives from the Latin Strena, word probably of Sabine origin, with the meaning "gift of good luck."

Typically Italian tradition is instead that of the bagpipers, or men dressed as shepherds and equipped with bagpipes, who come down from the mountains, playing Christmas music.[8] This tradition, dating back to the 19th century, is particularly widespread in the South of the country.[9] A description of the Abruzzese bagpipers is provided by Héctor Berlioz in 1832.[8]Typical bearers of gifts from the Christmas period in Italy are Santa Lucia (December 13), Baby Jesus, Babbo Natale (the name given to Santa Claus), and, on Epiphany, the Befana.[10] The typical Italian food products of the Christmas period are panettone, pandoro, torrone, struffoli, veneziana, bisciola and cavallucci. In Italy there are many traditions related to Easter (Italian: Pasqua). In Versilia, always as a sign of forgiveness, but this time towards Jesus, the women of the sailors kiss the earth, saying: "Terra bacio e terra sono - Gesù mio, chiedo perdono" ("I kiss the earth and earth I am - my Jesus, I ask for forgiveness").[11] In Abruzzo, however, it is the custom of farmers during Easter to add holy water to food.[11] Holy water is also used in Julian March, where half a glass is drunk on an empty stomach, before eating two hard-boiled eggs and a focaccia washed down with white wine.[11] The typical Italian food products of the Easter period are cappello del prete, casatiello, colomba di Pasqua, penia, pizzelle and pizza di Pasqua.

Another symbol used during the Easter period is fire. In particular, in Coriano, in the province of Rimini, bonfires are lit on Easter Eve,[11] while the blessed fire is brought to the countryside in the autonomous province of Bolzano.[11] Bonfires are also lit in San Marco in Lamis, this time lit on a wheeled cart.[11] In Florence, the use of sacred fire has changed over time: before the year one thousand candles were in fact brought into the houses which were lit by a candle which was in turn lit through a lens or a flint; at the beginning of the 14th century, instead, three pieces of flint were used that according to tradition came from the Holy Sepulcher of Jerusalem;[11] according to the story, these pieces of flint were donated to the Pazzi family by Godfrey of Bouillon.[11] Later, the use of the sacred fire in Florence materialized in a chariot full of fireworks (Scoppio del carro).[11]

In Italy, New Year's Eve (Italian: Vigilia di Capodanno or Notte di San Silvestro) is celebrated by the observation of traditional rituals, such as wearing red underwear.[12] An ancient tradition in southern regions which is rarely followed today was disposing of old or unused items by dropping them from the window.[13] Dinner is traditionally eaten with relatives and friends. It often includes zampone or cotechino (a meal made with pig's trotters or entrails), and lentils. At 20:30, the President of Italy reads a television message of greetings to Italians.[14] At midnight, fireworks are displayed all across the country. Rarely followed today is the tradition that consist in eating lentil stew when the bell tolls midnight, one spoonful per bell. This is supposed to bring good fortune; the round lentils represent coins.[15]

The Italian national patronal day, on 4 October, celebrates Saints Francis and Catherine. Each city or town also celebrates a public holiday on the occasion of the festival of the local patron saint,[16] for example: Rome on 29 June (Saints Peter and Paul), Milan on 7 December (Saint Ambrose), Naples on 19 September (Saint Januarius), Venice on 25 April (Saint Mark the Evangelist) and Florence on 24 June (Saint John the Baptist). Notable traditional patronal festivals in Italy are the Feast of Saints Francis and Catherine, the Festival of Saint Agatha, the Feast of Saints Peter and Paul, the Feast of San Gennaro and the Feast of Our Lady of the Hens.

Where the Ambrosian rite is observed, that is, in most of the churches of the archdiocese of Milan and in some of the neighboring dioceses, the Carnival (Italian: Carnevale) ends on the first Sunday of Lent; the last day of carnival is Saturday, 4 days later than the Tuesday when it ends where the Roman rite is observed. Above all, the Carnival of Venice and the Carnival of Viareggio, but also the Carnival of Ivrea have a reputation that goes beyond national borders and are popular with tourists from both Italy and abroad.[17] These carnivals include sophisticate masquerades and parades. A completely different form or Carnival takes place in Sardinia, based on rituals to awaken the earth after Winter, possibly descending from pre-Christian traditions. In Italy, a sagra (plural: sagre) is a popular festival of a local nature and annual frequency, which traditionally arises from a religious festival, celebrated on the occasion of a consecration or to commemorate a saint (usually the patron saint), but also used to celebrate the harvest or promote a food and wine product local.[18] During a festival the local fair, the market and various celebrations usually take place.[18]

A sagra is often dedicated to some specific local food, and the name of the sagra includes that food; for example: Festival delle Sagre astigiane, a Sagra dell'uva (grapes) at Marino, a Sagra della Rana (frog) at Casteldilago near Arrone, a Sagra della Cipolla (onion) at Cannara, a Sagra della Melanzana ripiena (stuffed eggplant) at Savona, a Sagra della Polenta at Perticara di Novafeltria, a Sagra del Lattarino at Bracciano, a Sagra del Frico at Carpacco-Dignano and so on. Among the most common sagre are those celebrating olive oil, wine, pasta and pastry of various kinds, chestnuts, and cheese.

Ferragosto is a public holiday celebrated on August 15th in all of Italy. It originates from Feriae Augusti ("Festivals [Holidays] of the Emperor Augustus"), the festival of Augustus, who made 1 August a day of rest after weeks of hard work on the agricultural sector. As the festivity was created for political reasons, the Catholic Church decided to move the festivity to 15 August which is the Assumption of Mary allowing them to include this in the festivity. Food and board was not included, which is why even today Italians associate packed lunches and barbecues with this day. By metonymy, it is also the summer vacation period around mid-August, which may be a long weekend (ponte di ferragosto) or most of August.[19]

Historical competitions are widespread throughout the Italian national territory, such as the Palio, the name given in the country to an annual athletic contest, very often of a historical character, pitting the neighbourhoods of a town or the hamlets of a comune against each other. Typically, they are fought in costume and commemorate some event or tradition of the Middle Ages and thus often involve horse racing, archery, jousting, crossbow shooting, and similar medieval sports.[20] The Palio di Siena is the only one that has been run without interruption since it started in the 1630s and is definitely the most famous all over the world.[21] 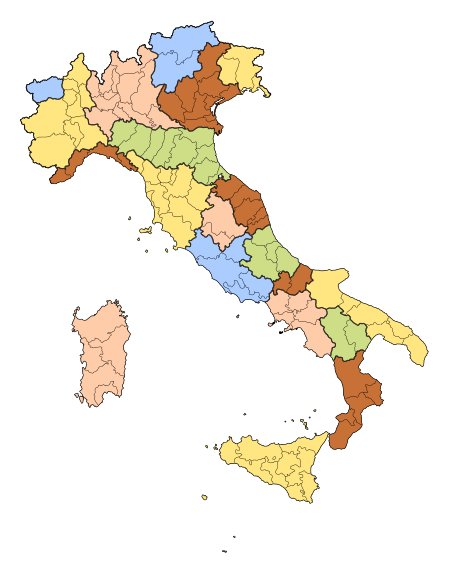 The four vessels of the Regatta of the Historical Marine Republics. From the top to the left, clockwise, Venice, Genoa, Pisa and Amalfi

The Neapolitan nativity scene of the Royal Palace of Caserta.[22]

Feast of Our Lady of the Hens

Medieval pageant of the Palio of Ferrara La Scala, considered among the most prestigious theaters in the world[100]

Carnival of Fano [it] Carnival of Tempio Pausania [it] The Venice Film Festival is the oldest film festival in the world.[192]