.mw-parser-output .hidden-begin{box-sizing:border-box;width:100%;padding:5px;border:none;font-size:95%}.mw-parser-output .hidden-title{font-weight:bold;line-height:1.6;text-align:left}.mw-parser-output .hidden-content{text-align:left}This article may be expanded with text translated from the corresponding article in Italian. (January 2013) Click [show] for important translation instructions. View a machine-translated version of the Italian article. Machine translation, like DeepL or Google Translate, is a useful starting point for translations, but translators must revise errors as necessary and confirm that the translation is accurate, rather than simply copy-pasting machine-translated text into the English Wikipedia. Consider adding a topic to this template: there are already 2,720 articles in the main category, and specifying|topic= will aid in categorization. Do not translate text that appears unreliable or low-quality. If possible, verify the text with references provided in the foreign-language article. You must provide copyright attribution in the edit summary accompanying your translation by providing an interlanguage link to the source of your translation. A model attribution edit summary is Content in this edit is translated from the existing Italian Wikipedia article at [[:it:Calendario delle elezioni in Italia]]; see its history for attribution. You should also add the template ((Translated|it|Calendario delle elezioni in Italia)) to the talk page. For more guidance, see Wikipedia:Translation.

National-level elections in Italy are called periodically to form a parliament consisting of two houses: the Chamber of Deputies (Camera dei Deputati) with 400 members; and the Senate of the Republic (Senato della Repubblica) with 200 elected members, plus a few appointed senators for life. Italy is a parliamentary republic: the President of the Republic is elected for a seven-year term by the two houses of Parliament in joint session, together with special electors appointed by the Regional Councils.

The most recent Italian general election was held on 25 September 2022.

The last general election was held on 25 September 2022

The centre-right coalition, in which Giorgia Meloni's Brothers of Italy emerged as the main political force, won an absolute majority of seats in the Chamber of Deputies and in the Senate of the Republic. The centre-left coalition, the anti-establishment Five Star Movement and the centrist Action - Italia Viva came in second, third and fourth respectively.

The autonomous region of Aosta Valley in northwestern Italy elects one member to the Chamber of Deputies through a direct first-past-the-post election. Some parties that formed electoral coalitions in Italy might have opted to run against one another, or form different coalitions, in this particular region.[2][3]

Eight members of the Chamber of Deputies are elected by Italians abroad. Two members are elected for North America and Central America (including most of the Caribbean), two members for South America (including Trinidad and Tobago), three members for Europe, and one member for the rest of the world (Africa, Asia, Oceania, and Antarctica). Voters in these regions select candidate lists and cast a preference vote for individual candidates. The seats are allocated by proportional representation. The electoral law allows for parties to form different coalitions on the lists abroad, compared to the lists in Italy; Forza Italia, the League, and Brothers of Italy formed a unified list for abroad constituencies.[4]

Four members of the Senate of the Republic are elected by Italians abroad. One member is elected for North America and Central America (including most of the Caribbean), one member for South America (including Trinidad and Tobago), one member for Europe, and one for the rest of the world (Africa, Asia, Oceania, and Antarctica). Voters in these regions select candidate lists and cast a preference vote for individual candidates. The seats are allocated by proportional representation. The electoral law allows for parties to form different coalitions on the lists abroad, compared to the lists in Italy; since January 2018, Forza Italia, the League, and Brothers of Italy have formed a unified list for abroad constituencies.[6]

This graph shows the results of elections held in Italy from 1946 to today, with the percentages of consensus gathered by the various parties and movements displayed by color. Passing your mouse over the different colored sections will display the name of the grouping and the percentage in the corresponding election. Clicking on a region will direct you to the article on the party or election selected. 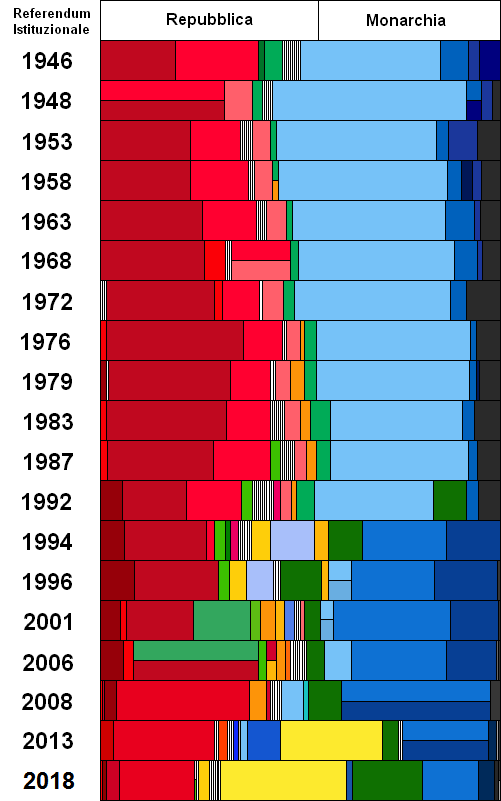 This is, instead, the graph for general elections from 1946 in Italy by absolute numbers of votes for every party:

The constitution of Italy provides for two kinds of binding referendums.

A legislative referendum can be called in order to abrogate a law totally or partially, if requested by 500,000 electors or five regional councils. This kind of referendum is valid only if at least a majority of electors goes to the polling station. It is forbidden to call a referendum regarding financial laws or laws relating to pardons or the ratification of international treaties.

A constitutional referendum can be called in order to approve a constitutional law or amendment only when it has been approved by the Houses (Chamber of Deputies and Senate of the Republic) with a majority of less than two thirds in both or either House, and only at the request of one fifth of the members of either House, or 500,000 electors or five Regional Councils. A constitutional referendum is valid no matter how many electors go to the polling station. Any citizen entitled to vote in an election may participate in a referendum.