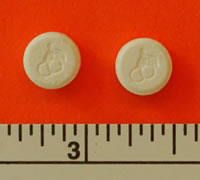 5-MeO-MiPT is a psychedelic and hallucinogenic drug, used by some as an entheogen. It has structural and pharmacodynamic properties similar to the drugs 5-MeO-DiPT, DiPT, and MiPT. It is commonly used as a "substitute" for 5-MeO-DiPT because of the very similar structure and effects.

5-MeO-MiPT causes the ehrlich reagent to turn purple then fade to faint blue. It causes the marquis reagent to go yellow through to black.[1]

This is an analogue of the more popular drug 5-MeO-DiPT (nicknamed "foxy methoxy") and has the nickname "moxy". Some users report the tactile effects of 5-MeO-DiPT without some of the unwanted side effects. At higher doses it becomes much more psychedelic sometimes being compared to 5-MeO-DMT. But at doses of 4-10 milligrams users find 5-MeO-MiPT to be a very euphoric and tactile chemical.[2][3] Its energetic effects can be very strong at high doses, increasing normal heart rate considerably. Sounds can be amplified in perception to a point where synesthetic effects ("touching or/and tasting sounds") occur.[4]

Based on many anecdotal reports,[6][7] dosages can be classified as follows:

The mechanism that produces the hallucinogenic and entheogenic effects of 5-MeO-MiPT is thought to result primarily from 5-HT2A receptor agonism, although additional mechanisms of action such as inhibition of MAO may be involved also.[8][9] While 5-MeO-MiPT binds most strongly to 5-HT1A receptors, it also shows fairly strong binding affinity to the SERT and NET, thereby acting as a moderately potent serotonin-norepinephrine reuptake inhibitor.[10] These mechanisms may help explain why there are many anecdotal reports of anti-depressant and anxiolytic effects from modest doses of this compound. For example, SNRIs such as venlafaxine are commonly prescribed to treat depression, and the 5-HT1A agonist buspirone is prescribed primarily for treatment of anxiety.

Exposing compounds to the reagents gives a colour change which is indicative of the compound under test. The following test results are from protestkit.

In Luxembourg, 5-MeO-MiPT is not cited in the list of prohibited substances.[12] Therefore, it is still a legal substance.

5-MeO-MiPT is a Class A drug in the United Kingdom as are most ethers of ring-hydroxy tryptamines.[citation needed]

5-MeO-MiPT is unscheduled at the federal level in the United States,[13] but it could be considered an analog of 5-MeO-DiPT, in which case purchase, sale, or possession with intent to consume could be prosecuted under the Federal Analog Act.