Phencyclidine or phenylcyclohexyl piperidine (PCP), also known as angel dust among other names, is a dissociative hallucinogenic drug used for its mind-altering effects.[1][5] PCP may cause hallucinations, distorted perceptions of sounds, and violent behavior.[5][8][9] As a recreational drug, it is typically smoked, but may be taken by mouth, snorted, or injected.[5][6][8] It may also be mixed with cannabis or tobacco.[1][5]

Adverse effects may include seizures, coma, addiction, and an increased risk of suicide.[8] Flashbacks may occur despite stopping usage.[9] Chemically, PCP is a member of the arylcyclohexylamine class, and pharmacologically, it is a dissociative anesthetic.[5][10][11] PCP works primarily as an NMDA receptor antagonist.[10] 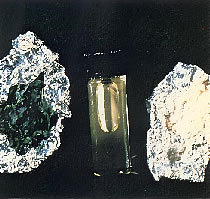 Illicit PCP in several forms seized by the DEA.

Phencyclidine is used for its ability to induce a dissociative state.[15]

Behavioral effects can vary by dosage. Low doses produce a numbness in the extremities and intoxication, characterized by staggering, unsteady gait, slurred speech, bloodshot eyes, and loss of balance. Moderate doses (5–10 mg intranasal, or 0.01–0.02 mg/kg intramuscular or intravenous) will produce analgesia and anesthesia. High doses may lead to convulsions.[16] The drug is often illegally produced under poorly controlled conditions; this means that users may be unaware of the actual dose they are taking.[17]

Psychological effects include severe changes in body image, loss of ego boundaries, paranoia, and depersonalization. Psychosis, agitation and dysphoria, hallucinations, blurred vision, euphoria, and suicidal impulses are also reported, as well as occasional aggressive behavior.[18][19]: 48–49 [16] Like many other drugs, PCP has been known to alter mood states in an unpredictable fashion, causing some individuals to become detached, and others to become animated. PCP may induce feelings of strength, power, and invulnerability as well as a numbing effect on the mind.[6]

Studies by the Drug Abuse Warning Network in the 1970s show that media reports of PCP-induced violence are greatly exaggerated and that incidents of violence are unusual and often limited to individuals with reputations for aggression regardless of drug use.[19]: 48  Although uncommon, events of PCP-intoxicated individuals acting in an unpredictable fashion, possibly driven by their delusions or hallucinations, have been publicized.[20] Other commonly cited types of incidents include inflicting property damage and self-mutilation of various types, such as pulling one's own teeth.[19]: 48 [20] These effects were not noted in its medicinal use in the 1950s and 1960s, however, and reports of physical violence on PCP have often been shown to be unfounded.[21][22]

Recreational doses of the drug also occasionally appear to induce a psychotic state, with emotional and cognitive impairment that resembles a schizophrenic episode.[23][24] Users generally report feeling detached from reality.[25]

PCP is self-administered and induces ΔFosB expression in the D1-type medium spiny neurons of the nucleus accumbens,[2][27] and accordingly, excessive PCP use is known to cause addiction.[2] PCP's rewarding and reinforcing effects are at least partly mediated by blocking the NMDA receptors in the glutamatergic inputs to D1-type medium spiny neurons in the nucleus accumbens.[2] PCP has been shown to produce conditioned place aversion and conditioned place preference in animal studies.[28]

PCP comes in both powder and liquid forms (PCP base is dissolved most often in ether), but typically it is sprayed onto leafy material such as cannabis, mint, oregano, tobacco, parsley, or ginger leaves, then smoked.[citation needed]

Management of PCP intoxication mostly consists of supportive care – controlling breathing, circulation, and body temperature – and, in the early stages, treating psychiatric symptoms.[31][32][33] Benzodiazepines, such as lorazepam, are the drugs of choice to control agitation and seizures (when present). Typical antipsychotics such as phenothiazines and haloperidol have been used to control psychotic symptoms, but may produce many undesirable side effects – such as dystonia – and their use is therefore no longer preferred; phenothiazines are particularly risky, as they may lower the seizure threshold, worsen hyperthermia, and boost the anticholinergic effects of PCP.[31][32] If an antipsychotic is given, intramuscular haloperidol has been recommended.[33][34][35]

Forced acid diuresis (with ammonium chloride or, more safely, ascorbic acid) may increase clearance of PCP from the body, and was somewhat controversially recommended in the past as a decontamination measure.[31][32][33] However, it is now known that only around 10% of a dose of PCP is removed by the kidneys, which would make increased urinary clearance of little consequence; furthermore, urinary acidification is dangerous, as it may induce acidosis and worsen rhabdomyolysis (muscle breakdown), a not-unusual manifestation of PCP toxicity.[31][32]

PCP is well known for its primary action on the NMDA receptor, an ionotropic glutamate receptor, in rats and in rat brain homogenate.[46][43] As such, PCP is an NMDA receptor antagonist. The role of NMDAR antagonism in the effect of PCP, ketamine, and related dissociative agents was first published in the early 1980s by David Lodge[47] and colleagues.[48] Other NMDA receptor antagonists include ketamine,[49] tiletamine,[50] dextromethorphan,[51] nitrous oxide, and dizocilpine (MK-801).

Research also indicates that PCP inhibits nicotinic acetylcholine receptors (nAChRs) among other mechanisms. Analogues of PCP exhibit varying potency at nACh receptors[52] and NMDA receptors.[53] Findings demonstrate that presynaptic nAChRs and NMDA receptor interactions influence postsynaptic maturation of glutamatergic synapses and consequently impact synaptic development and plasticity in the brain.[54] These effects can lead to inhibition of excitatory glutamate activity in certain brain regions such as the hippocampus[55] and cerebellum[56] thus potentially leading to memory loss as one of the effects of prolonged use. Acute effects on the cerebellum manifest as changes in blood pressure, breathing rate, pulse rate, and loss of muscular coordination during intoxication.[9]

PCP, like ketamine, also acts as a potent dopamine D2High receptor partial agonist in rat brain homogenate[43] and has affinity for the human cloned D2High receptor.[57] This activity may be associated with some of the other more psychotic features of PCP intoxication, which is evidenced by the successful use of D2 receptor antagonists (such as haloperidol) in the treatment of PCP psychosis.[58]

A binding study assessed PCP at 56 sites including neurotransmitter receptors and transporters and found that PCP had Ki values of >10,000 nM at all sites except the dizocilpine (MK-801) site of the NMDA receptor (Ki = 59 nM), the σ2 receptor (PC12) (Ki = 136 nM), and the serotonin transporter (Ki = 2,234 nM).[38] The study notably found Ki values of >10,000 nM for the D2 receptor, the opioid receptors, the σ1 receptor, and the dopamine and norepinephrine transporters.[38] These results suggest that PCP is a highly selective ligand of the NMDAR and σ2 receptor.[38] However, PCP may also interact with allosteric sites on the monoamine transporters to produce inhibition of monoamine reuptake.[38]

Phencyclidine is an NMDA receptor antagonist that blocks the activity of the NMDA receptor to cause anaesthesia and analgesia without causing cardiorespiratory depression.[61][18] NMDA is an excitatory receptor in the brain, when activated normally the receptor acts as an ion channel and there is an influx of positive ions through the channel to cause nerve cell depolarisation. Phencyclidine enters the ion channel and binds, reversibly and non-competitively, inside the channel pore to block the entry of positive ions to the cell, thereby inhibiting cell depolarisation.[61][62]

Some studies found that, like other NMDA receptor antagonists, PCP can cause a kind of brain damage called Olney's lesions in rats.[63][64] Studies conducted on rats showed that high doses of the NMDA receptor antagonist dizocilpine caused reversible vacuoles to form in certain regions of the rats' brains. All studies of Olney's lesions have only been performed on non-human animals and may not apply to humans. One unpublished study by Frank Sharp reportedly showed no damage by the NDMA antagonist ketamine, a structurally similar drug, far beyond recreational doses,[65] but due to the study never having been published, its validity is controversial.

PCP has also been shown to cause schizophrenia-like changes in N-acetylaspartate and N-acetylaspartylglutamate levels in the rat brain, which are detectable both in living rats and upon necropsy examination of brain tissue.[66] It also induces symptoms in humans that mimic schizophrenia.[67] PCP not only produced symptoms similar to schizophrenia, it also yielded electroencephalogram changes in the thalamocortical pathway (increased delta decreased alpha) and in the hippocampus (increase theta bursts) that were similar to those in schizophrenia.[68] PCP-induced augmentation of dopamine release may link the NMDA and dopamine hypotheses of schizophrenia.[69]

PCP is metabolized into PCHP, PPC and PCAA. The drug is metabolized 90% by oxidative hydroxylation in the liver during the first pass. Metabolites are glucuronidated and excreted in the urine. Nine percent of ingested PCP is excreted in its unchanged form.[18]

When smoked, some of the compound is broken down by heat into 1-phenylcyclohexene (PC) and piperidine.

Conversion of PCP into PC and piperidine by heat.

The time taken before the effects of PCP manifest is dependent on the route of administration. The onset of action for inhalation occurs in 2–5 minutes, whereas the effects may take 15 to 60 minutes when ingested orally.[18] Fewer than 30 different analogs of PCP were reported as being used on the street during the 1970s and 1980s, mainly in the United States.[48] Only of a few of these compounds were widely used including rolicyclidine (PCPy), eticyclidine (PCE), and tenocyclidine (TCP).[48] Less common analogs include 3-HO-PCP, 3-MeO-PCMo, and 3-MeO-PCP.

The generalized structural motif required for PCP-like activity is derived from structure-activity relationship studies of PCP derivatives. All of these derivatives are likely to share some of their psychoactive effects with PCP itself, although a range of potencies and varying mixtures of anesthetic, dissociative, and stimulant effects are known, depending on the particular drug and its substituents. In some countries such as the United States, Australia, and New Zealand, all of these compounds would be considered controlled substance analogs of PCP under the Federal Analog Act and are hence illegal drugs if sold for human consumption.[70][71]

PCP was initially made in 1926 and brought to market as an anesthetic medication in the 1950s.[11][72][73][74] Its use in humans was disallowed in the United States in 1965 due to the high rates of side effects, while its use in animals was disallowed in 1978.[1][11][75] Moreover, ketamine was discovered and was better tolerated as an anesthetic.[75] PCP is classified as a schedule II drug in the United States.[1] A number of derivatives of PCP have been sold for recreational and non-medical use.[48]

It is a Schedule I drug by the Controlled Drugs and Substances act in Canada, a List I drug of the Opium Law in the Netherlands, and a Class A substance in the United Kingdom.[78]

PCP began to emerge as a recreational drug in major cities in the United States in 1960s.[8] In 1978, People magazine and Mike Wallace of 60 Minutes called PCP the country's "number one" drug problem. Although recreational use of the drug had always been relatively low, it began declining significantly in the 1980s. In surveys, the number of high school students admitting to trying PCP at least once fell from 13% in 1979 to less than 3% in 1990.[19]: 46–49