The Indonesian National Police (Indonesian: Kepolisian Negara Republik Indonesia, lit. The State Police of the Republic of Indonesia, abbreviated as POLRI) is the national law enforcement and police force of the Republic of Indonesia. Founded on 1 July 1946, it was formerly a part of the country's military since 1962. The police were formally separated from the armed forces on 1 April 1999 in a process which was formally completed on 1 July 1999.[2]

In total, per 2020 the total personnel that the Indonesian National Police possesses is 440,000,[6] and the number is increasing every year, it includes 14,000 Brimob personnel,[7] with up-to 7,000 water and aviation police personnel.[8] Polri is also assisted by an estimated 1 million members of Senkom Mitra Polri volunteers throughout the country which are civilians that assist the police.[9]

While Indonesia was under Dutch colonial rule, police duties were performed either by military establishments or the colonial police known as the veldpolitie, or field police.[11] Japanese occupation during WW II brought changes when the Japanese formed various armed organisations to support their war effort. This led to militarily trained youths being armed with confiscated Dutch arms to perform police duties.

After the Japanese occupation, the national police became an armed organization.[citation needed] The Indonesian police was established on 19 August 1945 (under the title of the National Police Agency (Badan Kepolisian Negara)) and its units fought in the Indonesian National Revolution against the invading Dutch forces. The police also participated in suppressing the 1948 communist revolt in Madiun. In 1962, the police was brought under the control of the Commander of the National Armed Forces and the Ministry of Defence, becoming the Indonesian Police Forces (Angkatan Kepolisian). Following the proclamation of independence, the police played a vital role when they actively supported the people's movement to dismantle the Japanese army, and to strengthen the defence of the newly created Republic of Indonesia. The police were not combatants who were required to surrender their weapons to the Allied Forces. During the revolution of independence, the police gradually formed into what is now known as Kepolisian Negara Republik Indonesia (Polri) or the Indonesian National Police. In April 1999, the police force officially regained its independence and now is separate from the armed forces proper.

1 July, which is marked as National Police Day (Hari Bhayangkara), honours the anniversary of the 1946 Cabinet resolution placing the INP as a national agency subordinated directly to the government of the Republic and thus responsible to the President (formerly the Prime Minister).

The key tasks of the Indonesian National Police are to:

In carrying out these basic tasks, police are to:

The organization of the Indonesian National Police is hierarchical, headed by the POLRI general headquarters in Kebayoran Baru. There is no differentiation between the central organization with its regional components.

Assistants to the Chief of Police 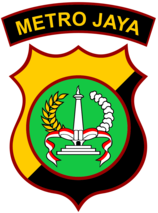 Emblem of the Metro Jaya Region

Each Regional Police headquarters (Polda) which covers a province oversees the following directorates:

The following fall under the Departamental police headquarters (Polres) of cities and regencies:

The following ranks are only used by personnel serving in the Mobile Brigade Corps and Water police units:

In the eyes of the people, the National Police force is "corrupt, brutal, and inept".[3] Even becoming a police officer can be expensive, with applicants having to pay up to Rp90 million, according to Indonesia Police Watch head, Neta Saputra Pane.[19]

In April 2009, angry that the Corruption Eradication Commission (KPK) had tapped his phone while investigating a corruption case, Indonesian Police chief detective Susno Duadji compared the KPK to a gecko (Indonesian: cicak) fighting a crocodile (Indonesian: buaya) meaning the police. Susno's comment, as it turned out, quickly backfired because the image of a cicak standing up to a buaya (similar to David and Goliath imagery) immediately had wide appeal in Indonesia. A noisy popular movement in support of the cicak quickly emerged. Students staged pro-cicak demonstrations, many newspapers ran cartoons with cicaks lining up against an ugly buaya, and numerous TV talk shows took up the cicak versus buaya topic with enthusiasm. As a result, references to cicaks fighting a buaya have become a well-known part of the political imagery of Indonesia.[20]

In June 2010, the Indonesian news magazine Tempo published a report on "fat bank accounts" held by senior police officers containing billions of rupiah. When the magazine went on sale in the evening groups of men said by witnesses to be police officers, went to newsstands with piles of cash to try to buy all the copies before they could be sold.[21][22]

When KPK investigators tried to search Polri headquarters in 2010 as part of an investigation into Djoko Susilo, then the head of Korlantas (police corps of traffic), they were detained, and only released following the intervention of the president, Susilo Bambang Yudhoyono. Following a trial, Djoko was jailed for 18 years. Two years later, the KPK began investigating another senior police officer, Budi Gunawan, who was subsequently nominated for the post of National Police Chief. The KPK then named Budi a suspect and his nomination was withdrawn. However, he was later sworn in as deputy police chief. The police subsequently took revenge by charging three KPK commissioners with criminal offenses.[23][24]

Amnesty International has accused Polri of "widespread" torture and other abuses of arrested individuals.[25] According to the organization, "Police in Indonesia shoot, beat and even kill people without fear of prosecution, leaving their victims with little hope of justice".[26]

In 2014 the Human Rights Watch reported that a physical virginity test is routinely performed on female applicants to the police force.[27][28]

An official admission of violence by police officers came in 2016 when Chief Gen. Badrodin Haiti admitted that officers of the Detachment 88 anti-terror unit were responsible for the death in custody of terrorist suspect Siyono, who died of heart failure after being kicked hard enough in the chest to fracture his ribs. The Indonesian National Commission on Human Rights stated in March 2016 that at least 121 terror suspects had died in custody since 2007[29]

Amnesty International called in June 2019 for an investigation of "credible evidence" of a range of grave violations by police, who it alleged were responsible for 10 unlawful killings in the aftermath of the re-election of president Joko Widodo.[30]

In July 2020, the Indonesian Commission for Missing Persons and Victims of Violence (KontraS) issued a report detailing police brutality over the preceding year that resulted in 304 deaths and 1,627 injuries in 921 violent incidents. The report also mentioned arbitrary arrests of people demonstrating legally, and acts of discrimination towards ethnic Papuans.[31] The following year, the same organization reported 651 acts of violence against civilians resulting in 13 deaths and 98 injuries. Most of the deaths were caused by excessive violence and arbitrary shootings.[32]

In the summer of 2022, an investigation into the killing of Brigadier Nofriansyah Yosua Hutabarat, an Indonesian police officer, overcame an alleged cover-up by police generals to conceal an alleged premeditated murder committed by Inspector General Ferdy Sambo, head of internal affairs of the Indonesian National Police, and four others,[33] including Sambo's wife.[34] The chair of Indonesia Police Watch called the affair "the worst scandal in the police's history".[35]

The standard issue sidearm to all Indonesian National Police officers is the Taurus Model 82 revolver in. 38 Special. While police personnel attached to special units such as Detachment 88, Gegana and BRIMOB are issued with the Glock 17 semi-automatic pistol.

The police vehicles that are usually operated by the Indonesian Police ("Polri") for patrol and law enforcement activities are mainly Ford Focus sedan, Mitsubishi Lancer, Hyundai Elantra (for some police regions), Mitsubishi Strada/Triton, Isuzu D-Max, Nissan Almera and Ford Ranger. Such vehicles are usually operated by the "Sabhara" police unit and other units which the vehicles are mainly colored dark-grey. In some areas, usually in rural places, the vehicles are not up-to date compared to the ones in the major urban areas in the country, so some police vehicles still use older versions such as the Toyota Kijang and Mitsubishi Kuda.

Police vehicles coloured orange usually Ford Focus and Mitsubishi Lancer sedans and white-orange Chevrolet Captivas are operated by the Vital Object Protection unit ("Pam Obvit") and usually parked outside and operated for international embassies, airports, and other special specified locations. It is also used by the Tourist police for patrol.

For the special police, counter-terrorism and anti-riot units such as the Mobile Brigade or "Brimob", Detachment 88 and "Gegana" units usually use special costumed vehicles for special operations such as the Pindad Komodo, Barracuda APC, and modified armored Mitsubishi Stradas, 2002 Nissan Terrano Spirits' and other special double-cabin and SUV vehicle types. Vehicles are coloured dark-grey with the bumper coloured orange identifying vehicles of the special police units. Some special operational "Gegana" and "Densus 88" vehicles are coloured black also with orange bumpers.

Other customised vehicles used for mobilisation of police personnel are usually modified Suzuki Mega Carrys, Isuzu Elfs and Toyota Dynas with horizontal side sitting facilities inside of the trunk covered by dark colored canvas for canopy. Costumed patrol pick-ups with mounted sitting facilities on the trunk covered with canopy are also operated by the police to carry police personnel during patrol, the pick-ups are usually Isuzu Panther pick-ups and usually operate in rural areas.

The National Police Force of Indonesia had changes for uniform colours about 3 times, the periods are:

Based on the regulation of the Chief of the Indonesian National Police [1], there are four types of uniform worn by police personnel which are:

The National Police Pledge is a pledge of loyalty and fidelity of all sworn personnel and constables to the government and people of Indonesia, the principles of nationhood and the Constitution.[36][37]