Carved Wooden houses from the palace of the Nawab of Radhanpur 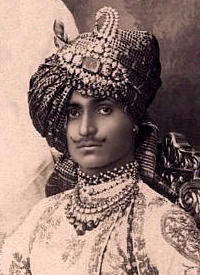 Radhanpur State was a princely state in India during the British Raj.[1] Its rulers belonged to a family of Babi House, the state was once a polity within the Mughal Empire. The last ruling Nawab of Radhanpur, Nawab Murtaza Khan, signed the instrument of accession to the Indian Union on 10 June 1948.[2]

The town of Radhanpur in the Saurashtra region of Gujarat was its capital. It was surrounded by a loopholed wall; the town was formerly known for its export trade in rapeseed, grains and cotton.[3]

In 1753 Jawan Mard Khan II, son of Jawan Mard Khan I who assisted Mughal Empire in the rule of Gujarat, became independent ruler of Radhanpur, among other territories. In 1706 Jafar Khan was appointed governor of Patan and in 1715 his son Khan Jahan (Jawan Mard Khan I) was appointed governor of Radhanpur and other territories. Khan jahan was killed by Kolis of balor while he marched against kolis.[4] The state was an independent polity within the Mughal Empire, its proximity to the territory of the Peshwa of the Maratha Confederacy endangered the ruling Nawab to possible conflicts.[citation needed]

On 16 December 1813, Radhanpur became a British protectorate and in 1819 the British helped the Nawab to expel the Khosa raiders, a predatory tribe which used to make incursions from Sindh. The state was part of the Palanpur Agency of the Bombay Presidency, which in 1925 became the Banas Kantha Agency. British administrators took charge of the regency of the state on two occasions, when two separate Nawabs died leaving a minor son as successor.

The Nawab of Radhanpur was empowered by the British to control the external relations, as well as to mint the own coins, of the state.[1] The latter privilege lasted until 1900, when Radhanpur State had to adopt the Indian currency. The state's progressive Nawab briefly introduced decimalization, with 100 fuls equaling one rupee, long before India began to use the decimal currency system in 1957.

Radhanpur State was ruled by Babi Pathans and had the right to an 11 gun salute. The rulers of the state bore the title of Nawab. They were related to the ruling houses of Junagadh and Balasinor, two other Gujarat princely states.[citation needed]