An SBB Red Arrow double railcar crossing the Feuerthalen Rhine bridge [de]; Schaffhausen is on the left and Feuerthalen on the right; picture taken in April 2018 from the Munot castle

listen); Alemannic German: Schafuuse; French: Schaffhouse; Italian: Sciaffusa; Romansh: Schaffusa; English: Shaffhouse) is a town with historic roots, a municipality in northern Switzerland, and the capital of the canton of the same name; it has an estimated population of 36,000 as of December 2016.[update] It is located right next to the shore of the High Rhine; it is one of four Swiss towns located on the northern side of the Rhine, along with Neuhausen am Rheinfall, the historic Neunkirch, and medieval Stein am Rhein.

The old town has many fine Renaissance era buildings decorated with exterior frescos and sculpture, as well as the old canton fortress, the Munot. Schaffhausen is also a railway junction of Swiss and German rail networks. One of the lines connects the town with the nearby Rhine Falls in Neuhausen am Rheinfall, Europe's largest waterfall, a tourist attraction.

The official language of Schaffhausen is (the Swiss variety of Standard) German, but the main spoken language is the local variant of the Alemannic Swiss German dialect.

The town is first mentioned in 1045 as Villa Scafhusun. There are at least two theories on the origin of this name:

The blazon of the municipal coat of arms is Or on a Base Vert issuant from sinister a Semi Castle Argent with tower with entrance from which is issuing a Semi Ram Sable.[5] The canting coat of arms refers to the second interpretation of the name, sheep-house. Schaffhausen was a city state in the Middle Ages, documented to have struck its own coins from 1045.[6] About 1050 the counts of Nellenburg founded the Benedictine monastery of All Saints, which became the centre of the town. Perhaps as early as 1190, certainly in 1208, it was an imperial free city, while the first seal dates from 1253. The powers of the abbot were gradually limited and in 1277 the Emperor Rudolf I gave the town a charter of liberties. In 1330 the emperor Louis of Bavaria pledged it to the Habsburgs. In the early 15th century, Habsburg power over the city waned. By 1411 the guilds ruled the city. Then, in 1415 the Habsburg Duke Frederick IV of Austria sided with the Antipope John XXIII at the Council of Constance, and was banned by the Emperor Sigismund. As a result of the ban and Frederick's need of money, Schaffhausen was able to buy its independence from the Habsburgs in 1418. The city allied with six of the Swiss confederates in 1454 and allied with a further two (Uri and Unterwalden) in 1479. Schaffhausen became a full member of the Old Swiss Confederacy in 1501.

The Reformation was adopted, initially, in 1524 and completely in 1529. The town was heavily damaged during the Thirty Years' War by the passage of Swedish (Protestant) and Bavarian (Roman Catholic) troops and the very important bridge was burnt down. It was not until the early 19th century that the arrested industrial development of the town recommenced.[6] In 1857, the first railroad, the Rheinfallbahn, running from Winterthur, reached Schaffhausen.[7]

Schaffhausen is located in a finger of Swiss territory surrounded on three sides by Germany. On 1 April 1944, Schaffhausen suffered a bombing raid by aircraft of the United States Army Air Forces, which strayed from German airspace into neutral Switzerland due to navigation errors. Air raid sirens had often sounded in the past, without an actual attack, so many residents ignored the sirens that day. A total of 40 civilians were killed in the raid. President Franklin Delano Roosevelt sent a personal letter of apology to the mayor of Schaffhausen and the United States quickly offered four million US dollars in reparations.[8]

In 1947 it merged with the former municipality of Buchthalen. Its area expanded again in 1964 when Herblingen was absorbed and for a third time in 2009 when Hemmental joined the municipality.[11]

Schaffhausen shares an international border with the German village of Büsingen am Hochrhein, an exclave entirely surrounded by Switzerland.

The City Council (de: Stadtrat) constitutes the executive government of the town of Schaffhausen and operates as a collegiate authority. It is composed of five councilors (German: Stadtrat/Stadträtin), each presiding over a department (Referat), which each consists of several administrative districts. The president of the executive department acts as mayor (Stadtpräsident(in)). In the mandate period January 2017 – December 2020 (Amtsdauer) the City Council is presided by Stadtpräsident Peter Neukomm. Departmental tasks, coordination measures and implementation of laws decreed by the Grand City Council (parliament) are carried by the City Council. The regular election of the City Council by any inhabitant valid to vote is held every four years. Any resident of Schaffhausen allowed to vote can be elected as a member of the City Council. The mayor is elected as such as well by public election while the heads of the other directorates are assigned by the collegiate. The mayor as well as the delegates are elected by means of a system of Majorz.[14]

As of 2017[update], Schaffhausen's City Council is made up of one representative of the SP (Social Democratic Party, who is also the mayor), one representative of the AL (Alternative List), one of the FDP (The Liberals), one of the SVP (Swiss People's Party), and one of the GLP (Green Liberal Party), giving the right parties a majority of three out of five seats. The last regular election was held on 28 August 2016.[15]

The last regular election of the Grand City Council was held on 27 November 2016 for the mandate period (German: Legislatur) from January 2017 to December 2020. Currently the Grand City Council consist of 9 Swiss People's Party (SVP/UDC), 8 members of the Social Democratic Party (SP/PS) and one of its junior section, the JUSOplus, 5 The Liberals (FDP/PLR) and one of its junior section, the JFSH, 4 Alternative List (AL), 3 Green Liberal Party (GLP/PVL), 2 ÖBS-Grüne (an alliance of the Ökoliberale Bewegung Schaffhausen (ÖBS) and the Green Party (GPS/PES)), and one each of Christian Democratic People's Party (CVP/PDC), Evangelical People's Party (EVP/PES), and Federal Democratic Union (EDU/UDF).[17]

Rhine Falls as seen from Neuhausen am Rheinfall

The historical population is given in the following chart:[25] 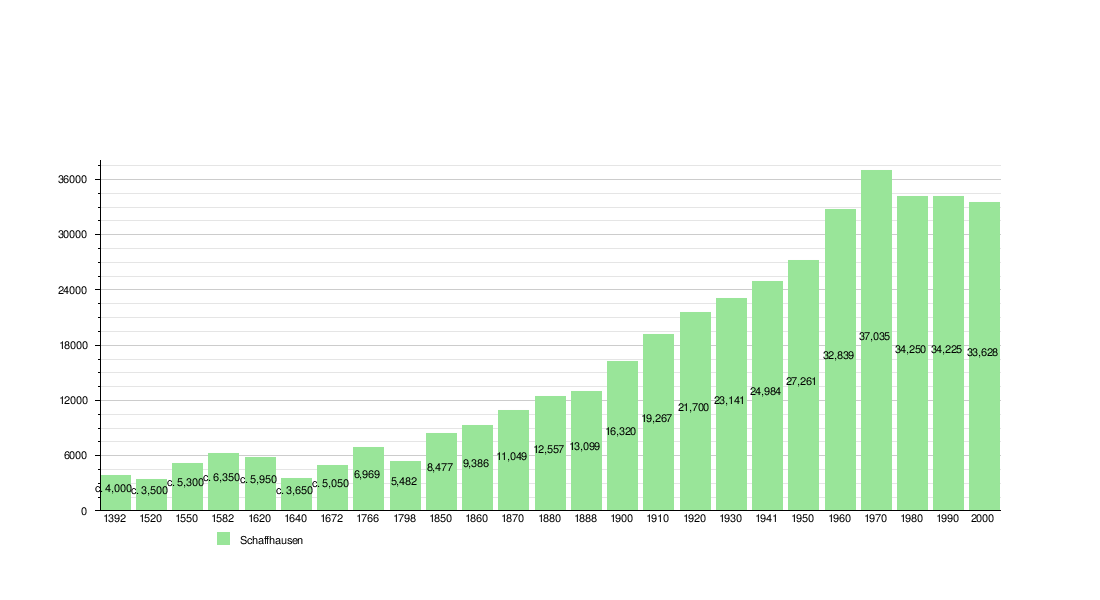 In Schaffhausen about 69.8% of the population (between age 25–64) have completed either non-mandatory upper secondary education or additional higher education (either university or a Fachhochschule (university of applied sciences)).[22] In Schaffhausen, as of 2007[update], 1.73% of the population attend kindergarten or another pre-school, 5.65% attend a Primary School, 2.98% attend a lower level Secondary School, and 2.49% attend a higher level Secondary School.[21]

Schaffhausen also has a bus network of six lines, including the Schaffhausen trolleybus system, linking it with nearby places such as Herblingen and Neuhausen am Rheinfall. One of the routes to the Rheinfall features, is the first route ever to feature a level 5 autonomous bus.[30]

There are 35 buildings or sites in Schaffhausen that are listed as Swiss heritage sites of national significance. This includes the entire old town of Schaffhausen, the city walls, the Giesserei +GF+ Werk I factory, the town and cantonal archives, the Schweizersbild Paleolithic cave and the Herblingen and Grüthalde Neolithic settlements. Additionally, there are four former guild houses and seven listed houses. There are only two listed religious buildings, the former Benedictine All Saints Abbey and the Church of St. John.[31]

There is a handball team in Schaffhausen which plays in the first Swiss division: Kadetten Schaffhausen. They are centered at the BBC Arena on Schweizersbildstrasse. It seats 3600 persons, and was built in 2011. Kadetten has been very successful and has won the second most titles in the history of the SHL.

Wikivoyage has a travel guide for Schaffhausen.

Wikisource has the text of the 1920 Encyclopedia Americana article Schaffhausen.
Municipalities in the Canton of Schaffhausen, Switzerland
Cantons and capitals of Switzerland Three CantonsEight CantonsThirteen CantonsCoats of arms
Capitals of European states and territories
Authority control
Categories
Categories: