listen); French: Schwytz; Italian: Svitto) is the capital of the canton of Schwyz in Switzerland.

The Federal Charter of 1291 or Bundesbrief, the charter that eventually led to the foundation of Switzerland, can be seen at the Bundesbriefmuseum.

The official language of Schwyz is (the Swiss variety of) German, but the main spoken language is the local variant of the Alemannic Swiss German dialect.

The earliest certain record of the name dates to 972, recorded in Medieval Latin as villa Suittes. There are a number of uncertain records dated between 924 and 960, in the form Swites (Suuites) and Switz.[3] The name is recorded as Schwitz in the 13th century, and in the 17th to 18th century often as Schweitz. The name's etymology is uncertain. It was long presented as derived from the name of an eponymous founder in Swiss legend, one Suito or Switer, an explanation found in Swiss school textbooks until the first half of the 20th century. There is currently no consensus on the name's derivation.[4] A Germanic etymology was suggested by Gatschet (1867), deriving the name from an Old High German verb suedan "to burn" (referring to slash-and-burn clearing of woodland for habitation).[5] Brandstetter (1871) is critical of Gatschet's suggestion and prefers derivation from an Alemannic personal name in Svid- as it were presenting a scholarly defense of the Suito of the founding legend.[6] The etymology proposed for the Schweizerisches Idiotikon by Hubschmied (1929) derives the name from a Gallo-Roman *(alpes) suētas, from the Gaulish or Latin word for "pig", via a Romance *suēdes "(mountain, pasture) of pigs" yielding an Alemannic Swītes. Hubschmied distanced himself from this opinion in 1961, preferring an unspecified pre-Roman (or "Etruscan") source. Sonderegger (1966) revisits Gatschet's suedan "slash-and-burn" proposal, but now claims derivation from a cognate Celtic root, *sveit-, Proto-Celtic *sveitos with a meaning of "clearing" or similar, giving Gaulish *Svētos (the long vowel as in Rēnos "Rhine"), Gallo-Romance *Svēdus, -is, and finally Swītes in Old High German by the 8th century.[7]

The name Schwyz was extended to the area dominated by Schwyz (the Canton of Schwyz), and later to the entire Old Swiss Confederacy. Other cantons tended to resent this in the 15th century, but after 1499 the term Schwyzer was widely self-adopted, out of spite so to speak, since it had been employed as a term of abuse by the Swabian side during the Swabian War. Eidgenossenschaft and Schwytzerland (the origin of the English name Switzerland) could be used interchangeably as country names in the 16th century.

The Swiss German pronunciation [ʃviːts] is the same for the name of the town and that of the country (the two are distinguished only by use of the definite article for the latter, [ʃviːts] "Schwyz", [tʃviːts] "Switzerland"). The spelling of y for [iː] originates from the ligature ij in 15th-century handwriting.

Fountain in the central plaza in Schwyz

While a few Roman era coins have been found in Schwyz, the earliest evidence of a settlement comes from the 8th century. The Alamanni cemetery at the parish church and the church itself are both from the first half of the 8th century. This first church was followed by a second ottonian church around 1000, which may have been destroyed by the 1117 Verona earthquake. In 1121 the third church building, a romanesque building, was consecrated. This was followed in the 15th Century by the much larger fourth church which was destroyed, along with much of the village, by fire in 1642. The fifth church, an early baroque church was replaced because of serious structural defects by the current late baroque church which was dedicated in 1774.[8]

According to the chronicle of Johann Stumpf from 1548, the old town originally consisted of a village square, the church and its cemetery, the town hall, the inn, the archive tower and a number of scattered wooden houses. Around 1500, to distinguish it from the Canton of Schwyz, Schwyz town was often called Kilchgassen, which meant the village around the church but not the surrounding villages. The fire of 1642, which destroyed 47 buildings in the center of the village, allowed the town to be totally rebuilt. A new, larger town square with major roads radiating out was built in front of the new church and the new city hall. The houses were rebuilt as urban townhouses and a ring of about 30 large patrician farm houses grew up surrounding the village center.[8]

View of Schwyz town below the Mythen mountains

The blazon of the municipal coat of arms is Gules, a Confederate cross couped in the hoist argent.[11]

As of 2000[update], there were 6,314 people who were single and never married in the municipality. There were 6,305 married individuals, 722 widows or widowers and 461 individuals who are divorced.[13]

The historical population is given in the following chart:[8] 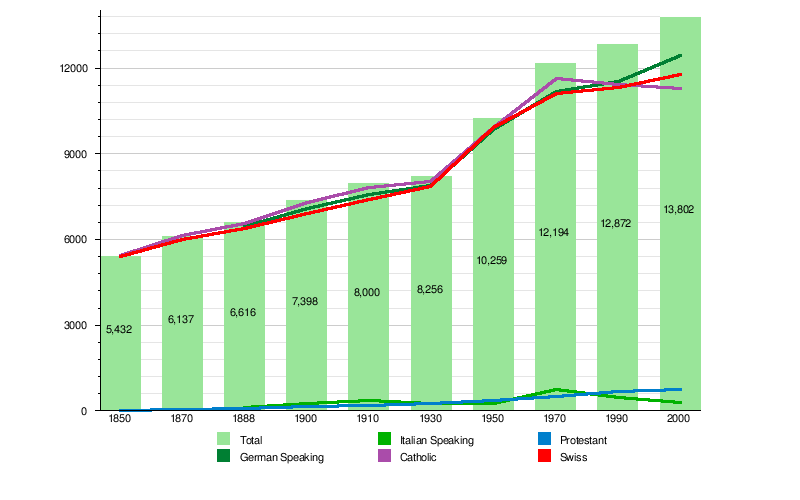 The Bundesbriefmuseum (Museum of the Swiss Charters of Confederation), the Dominican nuns Convent of St. Peter am Bach, the entire medieval and early modern settlement, the Hermitage and chapel, the Forum der Schweizer Geschichte (Forum of Swiss History), the Ab Yberg im Grund House, the Bethlehem House at Reichsstrasse 9, the Ceberg im Feldli house at Theodosiusweg 20, the house at Gotthardstrasse 99 in Ibach, the Grosshus at Strehlgasse 12, the Immenfeld house, the house at Langfeldweg 14 in Kaltbach, the house at Oberschönenbuch 79 in Ibach, the Herrenhaus Waldegg, the Hettlingerhäuser, the Hofstatt Ital Reding, the Catholic Parish Church of St. Martin, the Maihof, the Palais Büeler, the Rathaus (Town council house), the Reding House, the State Archives of Schwyz and the Köplihaus house are listed as a Swiss heritage site of national significance. The entire old city of Schwyz is part of the Inventory of Swiss Heritage Sites.[16] In Schwyz about 4,873 or (35.3%) of the population have completed non-mandatory upper secondary education, and 1,473 or (10.7%) have completed additional higher education (either university or a Fachhochschule). Of the 1,473 who completed tertiary schooling, 71.1% were Swiss men, 19.4% were Swiss women, 5.3% were non-Swiss men and 4.1% were non-Swiss women.[13] As of 2000[update], there were 419 students in Schwyz who came from another municipality, while 186 residents attended schools outside the municipality.[19]

A major school in Schwyz is the Kantonsschule Kollegium Schwyz (KKS), an upper Secondary school that is a Gymnasium and a vocational or technical college. The KKS has operated for over 150 years, though it builds on several older schools. The first Latin school in Schwyz opened in 1627 in the former Capuchin monastery of St. Josef im Loo. This school remained open until the 1798 French invasion. On 25 July 1841, the Jesuits laid the cornerstone of what would become the Jesuit College on the site of the modern Kollegium. The school opened in 1844 but only remained under Jesuit control for three years. In 1847, Federal troops marched into Schwyz to suppress the Catholic Sonderbund and forced the Jesuits to flee. It was reopened in 1855 under the Capuchin Father Theodosius Florentini and in the following year began teaching students. The school continued to teach students using both religious and secular teachers until the 1970s. In 1972, the lower Secondary students moved to Pfäffikon and the school became an upper Secondary Kantonsschule.[21] The A4 motorway, between Zürich and the Brunnen passes through the west of the municipality, and the town is linked to it by main roads and motorway junctions. Other main roads connect the town to Lucerne (along both banks of Lake Lucerne), to the Gotthard Pass and southern Switzerland, and to Pfaffikon and Einsiedeln in the north of the canton of Schwyz. A minor road crosses the Ibergeregg Pass to Oberiberg, providing an alternative route to Einsiedeln. Other minor roads reach to near the summits of both the Haggenegg Pass and Holzegg Pass, but only hiking trails actually cross these passes and continue to Alpthal.[9]

Schwyz railway station, on the Gotthard railway, is located about 2 km (1.2 mi) outside the town, in the parish of Seewen. The station is served by InterRegio and S-Bahn trains.

From 6 October 1900 to 14 December 1963, the Schwyzer Strassenbahnen linked the Schwyz railway station with the town centre. On 8 May 1915, the additional section between Schwyz and Brunnen See was opened[23] – and on the same day, the Schwyz SBB–Schwyz line was shut down. The trams were eventually replaced by the Auto AG Schwyz, which today operates 12 bus lines in the cantons of Lucerne and Schwyz.

The Rotenfluebahn, a gondola lift, links Rickenbach with the summit of the Rotenfluh mountain, which is, in summer, a popular vantage point over the Lake Lucerne region, and, in winter, a ski area.[24]