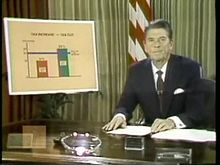 This timeline of modern American conservatism lists important events, developments and occurrences which have significantly affected conservatism in the United States. With the decline of the conservative wing of the Democratic Party after 1960, the movement is most closely associated with the Republican Party (GOP). Economic conservatives favor less government regulation, lower taxes and weaker labor unions while social conservatives focus on moral issues and neoconservatives focus on democracy worldwide. Conservatives generally distrust the United Nations and Europe and apart from the libertarian wing favor a strong military and give enthusiastic support to Israel.[1]

Although conservatism has much older roots in American history, the modern movement began to gel in the mid–1930s when intellectuals and politicians collaborated with businessmen to oppose the liberalism of the New Deal led by President Franklin D. Roosevelt, newly energized labor unions and big city Democratic machines. After World War II, that coalition gained strength from new philosophers and writers who developed an intellectual rationale for conservatism.[2]

Richard Nixon's victory in the 1968 presidential election is often considered a realigning election in American politics. From 1932 to 1968, the Democratic Party was the majority party as during that time period the Democrats had won seven out of nine presidential elections and their agenda gravely affected that undertaken by the Republican Dwight D. Eisenhower administration, but the election of 1968 reversed the situation completely. The Vietnam War split the Democratic Party. White ethnics in the North and white Southerners felt the national Democratic Party had deserted them. The white South has voted Republican at the presidential level since the 1950s and at the state and local level since the 1990s.

In the 1980s, President Ronald Reagan rejuvenated the conservative Republican ideology, with tax cuts, greatly increased defense spending, deregulation, a policy of rolling back communism, a greatly strengthened military and appeals to family values and conservative Judeo-Christian morality. His impact has led historians to call the 1980s the Reagan Era.[3] The Reagan model remains the conservative standard for social, economic and foreign policy issues. In recent years, social issues such as abortion, gun control and gay marriage have become important. Since 2009, the Tea Party movement has energized conservatives at the local level against the policies made by the presidency of Barack Obama, leading to Republican success in the 2010 and 2014 mid-term elections, and the 2016 election, in which Donald Trump was elected president.

As the nation plunges into its deepest depression ever, Republicans and conservatives fall into disfavor in 1930, 1932 and 1934, losing more and more of their seats. Liberals (mostly Democrats with a few Republicans and independents) come to power with the landslide 1932 election of liberal Democrat Franklin D. Roosevelt. In his first 100 days Roosevelt pushes through a series of dramatic economic programs known as the New Deal.[4]

The major metropolitan newspapers generally opposed the New Deal, as typified by William Randolph Hearst and his chain (Hearst had supported Roosevelt in 1932, but he parted ways in 1934.[5] Robert R. McCormick, owner of the Chicago Tribune, compared the New Deal to communism. He was also an America First isolationist who strongly opposed entering World War II to rescue the British Empire. McCormick also railed against the League of Nations, the World Court, and socialism.[6]

Liberalism made major gains after the assassination of John F. Kennedy in 1963, as Lyndon B. Johnson (LBJ) pushed through his liberal Great Society as well as civil rights laws. An unexpected bonanza helped conservatism in the late 1960s as liberalism came under intense attack from the New Left, especially in academe. This new element, says liberal historian Michael Kazin, worked to "topple the corrupted liberal order."[60] For the New Left "liberal" became a nasty epithet. Liberal commentator E. J. Dionne finds that, "If liberal ideology began to crumble intellectually in the 1960s it did so in part because the New Left represented a highly articulate and able wrecking crew."[61]

Movement conservatism emerges as grassroots activists react to liberal and New Left agendas. It develops a structure that supports Goldwater in 1964 and Ronald Reagan in 1976–80. By the late 1970s, local evangelical churches join the movement.[62][63] Liberalism faces a racial crisis nationwide. Within weeks of the passage of the 1964 Civil Rights law, "long hot summers" begin, lasting until 1970, with the worst outbreaks coming in the summer of 1967. Nearly 400 racial disorders in 298 cities saw blacks attacking shopkeepers and police, and looting stores.[64] Meanwhile, the urban crime rates shoot up. Demands for "law and order" escalate and the backlash causes disillusionment among working class whites with the liberalism of the Democratic Party.[65]

In the mid-1960s the GOP debates race and civil rights intensely. Republican liberals, led by Nelson Rockefeller, argue for a strong federal role because it was morally right and politically advantageous. Conservatives call for a more limited federal presence and discount the possibility of significant black voter support. Nixon avoids race issues in 1968.[66]

Highlights of the 1960 Republican convention in Chicago, Illinois

In support of Goldwater, Reagan delivers the address, "A Time for Choosing", which speech launches Reagan to national prominence[78]

In the 1964 presidential election, Goldwater only won his home state of Arizona and five states in the Deep South

Historians Meg Jacobs and Julian Zelizer argue that the 1970s were characterized by "a vast shift toward social and political conservatism," as well as a sharp decline in the proportion of voters who identified with liberalism.[99] Neoconservatism emerges as liberals become disenchanted with Lyndon B. Johnson's Great Society welfare programs. They increasingly focus on foreign policy, especially anti-communism, and support for Israel and for democracy in the Third World.[100]

While Nixon continues to antagonize and anger liberals, many of his programs upset conservatives. His foreign policy with Henry Kissinger focuses on détente with the USSR and China, and becomes a main target of conservatives. Nixon is uninterested in tax cuts or deregulation, but he does use executive orders and presidential authority to impose price and wage controls, expand the welfare state, require Affirmative Action, grow the National Endowment for the Humanities and the National Endowment for the Arts, and create the Environmental Protection Agency (EPA).[101]

William F. Buckley Jr. (left) and Ronald Reagan. two of the most visible conservatives of the 1970s and 1980s

The decade is marked by the rise of the Christian right and the Reagan Revolution.[129] A priority of Reagan's administration is the rollback of Soviet communism in Latin America, Africa and worldwide.[130] Reagan bases his economic policy, dubbed "Reaganomics", on supply-side economics.[131]

The terror attack on September 11, 2001 reorients the administration towards foreign policy and terrorism issues, providing an opportunity for neoconservatives to have a greater influence on foreign policy. The Bush Doctrine leads to long-term interventions in Afghanistan (2001 to present) and Iraq (2003–2011).[170]

At a joint session of Congress, President Bush pledges to defend America's freedom against the fear of terrorism, a policy known as the Bush Doctrine, September 20, 2001 (audio only)

Yes on 8 rally in Fresno, California

Numerous historians after 1990 re-examined the role of conservatism in recent American history, according it much greater importance than before.[192] One school of thought rejects the older consensus that liberalism was the dominant ethos. Instead it argues conservatism dominated American politics since the 1920s, with the brief exceptions of the New Deal era (1933–36) and the Great Society (1963–66).[193] However Historian Julian Zelizer argues that "liberalism survived the rise of conservatism."[194]