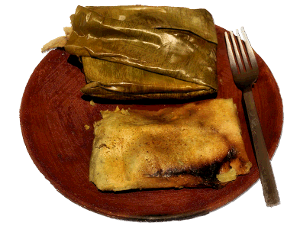 Tamales are a traditional food eaten in Guatemala on special occasions, especially during Christmas time and other holidays. They are pouches that are made of Masa usually filled with meat, such as Pork and Chicken, but can also be filled with vegetables such as Corn and Potatoes, and are usually wrapped in corn husks.

Most traditional foods in Guatemalan cuisine are based on Maya cuisine, with Spanish influence, and prominently feature corn, chilies and beans as key ingredients. Guatemala is famously home to the Hass avocado and the birthplace of chocolate, as first created by the Maya.[1]

There are also foods that are commonly eaten on certain days of the week. For example, it is a popular custom to eat paches (a kind of tamale made from potatoes) on Thursday. Certain dishes are also associated with special occasions, such as fiambre for All Saints Day on November 1 and tamales, which are common around Christmas.

Regional Guatemalan cuisine is relatively obscure, due in part to its geographic isolation in volcanic highlands, and also due to the civil war in the second half of the 20th century which discouraged international visitors. Guatemalan cuisine is heavily influenced by Mayan cuisine, with some Spanish influences as well. Many dishes are hyper-regional and are not available outside specific towns.[2]

Maize is an important staple food in Guatemalan cuisine, and has been cultivated in the region since ancient times. Hot chocolate also has a long history in Guatemala. Before the modern era, chocolate was seen as a luxury, and cocoa beans were also used as currency by ancient Mayans. Pork and beef were later introduced by Spanish colonization in the 16th century, supplementing the local meat sources of turkey, other poultry, and fish.[2] Black and red tamales in Guatemala.

There are reportedly hundreds of varieties of tamales throughout Guatemala. The key variations include the ingredients in the masa or dough (corn, potatoes, rice), in the filling (meat, fruits, nuts), and what it is wrapped with (leaves, husks). Tamales in Guatemala tend to be wrapped in green 'maxan' leaves (Calathea lutea), while Chuchitos — which resemble Mexican tamales — are wrapped in corn husks.

The masa is made out of corn that is not sweet, such as what is known as feed corn in the United States. In Guatemala, this non-sweet corn is called maize and the corn that Americans are used to eating on the cob (sweet corn), Guatemalans call elote. Tamales in Guatemala are more typically wrapped in plantain or banana leaves and maxan leaves than corn husks. Additionally Guatemalan tamales use cooked masa, which is prepared in a time-consuming process that requires a significant amount of work.

There are a variety of rice dishes made in Guatemala. Some include