Dish made from rice mixed with water or milk
This article needs additional citations for verification. Please help improve this article by adding citations to reliable sources. Unsourced material may be challenged and removed.Find sources: "Rice pudding" – news · newspapers · books · scholar · JSTOR (June 2020) (Learn how and when to remove this template message)

Rice pudding is a dish made from rice mixed with water or milk and other ingredients such as cinnamon, vanilla and raisins.

Variants are used for either desserts or dinners. When used as a dessert, it is commonly combined with a sweetener such as sugar. Such desserts are found on many continents, especially Asia where rice is a staple. Some variants are thickened only with the rice starch; others include eggs, making them a kind of custard.[1]

Rice pudding around the world

Arroz con leche (rice with milk) is the Spanish and American type of rice pudding. Leftover rice is often used, especially in restaurants.

Rice puddings are found in nearly every area of the world. Recipes can greatly vary even within a single country. The dessert can be boiled or baked. Different types of pudding vary depending on preparation methods and the selected ingredients. The following ingredients are usually found in rice puddings:

The following is a list of various rice puddings grouped by place of origin. Malaysian pulut hitam in a restaurant

Many dishes resembling rice pudding can be found in Southeast Asia, many of which have Chinese influences. Owing to Chinese usage, they are almost never referred to as rice pudding by the local populations (whether ethnic Chinese origin or not) but instead called sweet rice porridge. Indian Kheer in a restaurant In the United Kingdom and Ireland, rice pudding is a traditional dessert typically made with high-starch short-grained rice sold as "pudding rice".[4]

The earliest rice pudding recipes were called whitepot and date from the Tudor period.[5] Rice pudding is traditionally made with pudding rice, milk, cream and sugar and is sometimes flavoured with vanilla, nutmeg, jam and/or cinnamon. It can be made in two ways: in a saucepan or by baking in the oven.

In a saucepan, it is made by gently simmering the milk and rice until tender, and then the sugar is carefully mixed in. Finally, the cream is mixed in, and it can either be left to cool and be served at room temperature, or it can be heated and served hot. It should have a very creamy consistency. When made in the oven, the pudding rice is placed into a baking dish, and the milk, cream and sugar are mixed in. The dish is then placed in the oven and baked at a low temperature for a few hours, until the rice is tender and the pudding has a creamy consistency. While cooking, the pudding may develop a thick crust, which adds an interesting texture to the pudding. It is traditional to sprinkle the top with finely grated nutmeg before baking. Using evaporated milk (9% milk fat), instead of whole milk, enriches the result and intensifies the caramelised flavour.

An alternative recipe frequently used in the north of England[according to whom?] uses butter instead of cream, adds a small pinch of salt, and requires the pudding mixture to stand for an hour or so prior to being cooked. Such puddings tend to set firmly when cooled, enabling slices to be cut and eaten like cake. If eaten hot, the pudding is traditionally served with cream poured on top in wealthy households, and with full fat milk where cream was not available. A spoonful of sweet jam or conserve is also a very popular topping for the pudding. Clotted cream is often used in the Westcountry.

A specific type of rice is available and widely used for rice pudding called "pudding rice". Similar to Arborio rice, its grain is round and short, and when cooked produces a creamier consistency than savoury rice. However, other short grained rice can be used as a substitute.

Ready-made, pre-cooked rice pudding sold in tin cans or pots is very widely available in most supermarkets and shops. Because it is canned, it has a very long shelf life. A popular brand is Ambrosia.[6] Some brands are made with skimmed (fat free) milk. In the Nordic countries, rice porridge is a common breakfast and sometimes lunch. It is made as a warm dish from rice cooked in milk. When served, it is commonly sprinkled with cinnamon, sugar (or syrup) and a small knob of butter, and served with milk or fruit juice. In Iceland, it is sometimes served with cold slátur, a type of liver sausage. In different languages it is called risengrød (Danish), risengrynsgrøt (Norwegian), risgrynsgrötcode: swe promoted to code: sv (Swedish), riisipuuro (Finnish), grjónagrautur [ˈkrjouːnaˌkrœiːtʏr̥], hrísgrautur [ˈr̥iːs-] or hrísgrjónagrautur (Icelandic), and rísgreytur (Faroese).

The rice porridge dinner is used as a basis for rice cream dessert. There are many different variants of this dessert but the basis is the same: cold rice porridge (the dinner variant) is mixed with whipped cream and sweetened. In Sweden, it is sometimes mixed with oranges and is then called apelsinris. Risalamande (Danish, after French riz à l'amande, rice with almonds) is cold risengrød with whipped cream, vanilla, and chopped almond, often served with hot or chilled cherry (or strawberry) sauce. In Norway, the dessert is called riskrem and sometimes served with red sauce (usually made from strawberries or raspberries). Rice cream dessert is called ris à la Maltacode: swe promoted to code: sv in Sweden, while what is referred to as risgrynspuddingcode: swe promoted to code: sv is made with eggs instead of cream.

In Scandinavia, rice pudding has long been a part of Christmas tradition, in some countries referred to as julegröt/julegrøt/julegrød/joulupuuro (Yule porridge) or tomtegröt/nissegrød. The latter name is due to the old tradition of sharing the meal with the guardian of the homestead, called tomte or nisse (see also blót). In Finland the Christmas rice porridge is sometimes eaten with a kissel or compote made of dried prunes.

A particular Christmas tradition that is often associated with eating rice pudding or porridge is hiding a whole almond in the porridge. In Sweden and Finland, popular belief has it that the one who eats the almond will be in luck the following year. In Norway, Denmark, Iceland and the Faroe Islands, the one who finds it will get the almond present as a prize. In Denmark and the Faroe Islands, the almond tradition is usually done with risalamande served as dessert at Julefrokost (Christmas lunch) or on Christmas Eve. In Norway, it is commonly served as lunch or early dinner on Christmas Eve or the day before, lillejulaften ("Little Eve"). In Sweden and Finland, it is more commonly done with a rice porridge dinner, sometimes a few days before Christmas Eve.

Canada and the United States

In Canada and the United States, most recipes come from European immigrants. In the latter half of the 20th century, South Asian, Middle Eastern and Latin American recipes have also become more common. In New England, a popular pudding is made with long grain rice, milk, sugar, or in Vermont, maple syrup. This may be combined with nutmeg, cinnamon, and/or raisins. The pudding is usually partially cooked on top of the stove in a double boiler, and then "finished" in an oven.

Latin America and the Caribbean 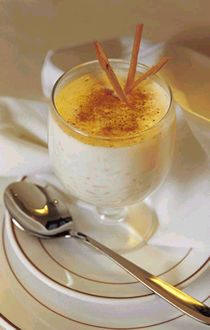 Buddhist scriptures state that Gautama Buddha's final meal before his enlightenment was a large bowl of rice pudding, prepared for him by a girl named Sujata.

Rice pudding is mentioned frequently in literature of the Victorian and Edwardian eras, typically in the context of a cheap, plain, familiar food, often served to children or invalids, and often rendered boring by too-frequent inclusion in menus.

In Edward Bulwer-Lytton's Kenelm Chillingly, a would-be host reassures a prospective guest: "Don't fear that you shall have only mutton-chops and a rice-pudding". In Henry James' A Passionate Pilgrim, the narrator laments: "having dreamed of lamb and spinach and a salade de saison, I sat down in penitence to a mutton-chop and a rice pudding".

Charles Dickens relates an incident of shabby treatment in A Schoolboy's Story: "it was imposing on Old Cheeseman to give him nothing but boiled mutton through a whole Vacation, but that was just like the system. When they didn't give him boiled mutton, they gave him rice pudding, pretending it was a treat. And saved the butcher."

T.S. Eliot, in the poem "Bustopher Jones: The Cat About Town", writes: "If he looks full of gloom/Then he's lunched at The Tomb/On cabbage, rice pudding, and mutton."