Austroasiatic language spoken by the Mon in Burma and Thailand 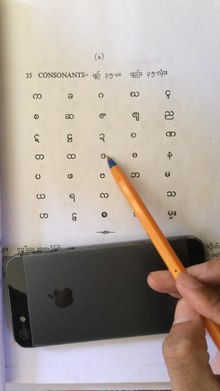 listen (help·info) Mon: ဘာသာမန် Burmese pronunciation: [pʰiəsa moʊn]; Burmese: မွန်ဘာသာ; Thai: ภาษามอญ; formerly known as Peguan and Talaing) is an Austroasiatic language spoken by the Mon people. Mon, like the related Khmer language, but unlike most languages in mainland Southeast Asia, is not tonal. The Mon language is a recognised indigenous language in Myanmar as well as a recognised indigenous language of Thailand.[3]

Mon was classified as a "vulnerable" language in UNESCO's 2010 Atlas of the World’s Languages in Danger.[4] The Mon language has faced assimilative pressures in both Myanmar and Thailand, where many individuals of Mon descent are now monolingual in Burmese or Thai respectively. In 2007, Mon speakers were estimated to number between 800,000 and 1 million.[5] In Myanmar, the majority of Mon speakers live in Southern Myanmar, especially Mon State, followed by Tanintharyi Region and Kayin State.[6]

Mon is an important language in Burmese history. Until the 12th century, it was the lingua franca of the Irrawaddy valley—not only in the Mon kingdoms of the lower Irrawaddy but also of the upriver Pagan Kingdom of the Bamar people. Mon, especially written Mon, continued to be a prestige language even after the fall of the Mon kingdom of Thaton to Pagan in 1057. King Kyansittha of Pagan (r. 1084–1113) admired Mon culture and the Mon language was patronized.

Kyansittha left many inscriptions in Mon. During this period, the Myazedi inscription, which contains identical inscriptions of a story in Pali, Pyu, Mon and Burmese on the four sides, was carved.[7] However, after Kyansittha's death, usage of the Mon language declined among the Bamar and the Burmese language began to replace Mon and Pyu as a lingua franca.[7]

Mon inscriptions from Dvaravati's ruins also litter Thailand. However it is not clear if the inhabitants were Mon, a mix of Mon and Malay or Khmer. Later inscriptions and kingdoms like Lavo were subservient to the Khmer Empire.

After the fall of Pagan, Mon again became the lingua franca of the Hanthawaddy Kingdom (1287–1539) in present-day Lower Myanmar, which remained a predominantly Mon-speaking region until the 1800s, by which point, the Burmese language had expanded its reach from its traditional heartland in Upper Burma into Lower Burma.

The region's language shift from Mon to Burmese has been ascribed to a combination of population displacement, intermarriage, and voluntary changes in self-identification among increasingly Mon-Burmese bilingual populations in throughout Lower Burma.[8] The shift was certainly accelerated by the fall of the Mon-speaking Restored Hanthawaddy Kingdom in 1757. Following the fall of Pegu (now Bago), many Mon-speaking refugees fled and resettled in what is now modern-day Thailand.[9] By 1830, an estimated 90% of the population in the Lower Burma self-identified as Burmese-speaking Bamars; huge swaths of former Mon-speaking areas, from the Irrawaddy Delta upriver, spanning Bassein (now Pathein) and Rangoon (now Yangon) to Tharrawaddy, Toungoo, Prome (now Pyay) and Henzada (now Hinthada), were now Burmese-speaking.[8] Great Britain's gradual annexation of Burma throughout the 19th century, in addition to concomitant economic and political instability in Upper Burma (e.g., increased tax burdens to the Burmese crown, British rice production incentives, etc.) also accelerated the migration of Burmese speakers from Upper Burma into Lower Burma.[10]

In 1972, the New Mon State Party (NMSP) established a Mon national school system, which uses Mon as a medium of instruction, in rebel-controlled areas.[12] The system was expanded throughout Mon State following a ceasefire with the central government in 1995.[12] Mon State now operates a multi-track education system, with schools either using Mon as the primary medium of instruction (called Mon national schools) offering modules on the Mon language in addition to the government curriculum (called "mixed schools").[12] In 2015, Mon language courses were launched state-wide at the elementary level.[13] This system has been recognized as a model for mother-tongue education in the Burmese national education system, because it enables children taught in the Mon language to integrate into the mainstream Burmese education system at higher education levels.[14][12]

In 2013, it was announced that the Mawlamyine-based Thanlwin Times would begin to carry news in the Mon language, becoming Myanmar's first Mon language publication since 1962.[15] Southern Myanmar (comprising Mon State, Kayin State, and Tanintharyi Region), from the Sittaung River in the north to Myeik (Mergui) and Kawthaung in the south, remains a traditional stronghold of the Mon language.[16] However, in this region, Burmese is favored in urban areas, such as Mawlamyine, the capital of Mon State.[16] In recent years, usage of Mon has declined in Myanmar, especially among the younger generation.[17]

While Thailand is home to a sizable Mon population due to historical waves of migration, only a small proportion (estimated to range between 60,000 to 80,000) speak Mon, due to Thaification and the assimilation of Mons into mainstream Thai society.[18] Mon speakers in Thailand are largely concentrated in Ko Kret.[19][18] The remaining contingent of Thai Mon speakers are located in the provinces of Samut Sakhon, Samut Songkhram, Nakhon Pathom, as well the western provinces bordering Myanmar (Kanchanaburi, Phetchaburi, Prachuap Khiri Khan, and Ratchaburi).[18] A small ethnic group in Thailand speak a language closely related to Mon, called Nyah Kur. They are descendants of the Mon-speaking Dvaravati kingdom.[20]

Thai Mon has some differences from the Burmese dialects of Mon, but they are mutually intelligible. The Thai varieties of Mon are considered "severely endangered."[20]

Unlike the surrounding Burmese and Thai languages, Mon is not a tonal language. As in many Mon–Khmer languages, Mon uses a vowel-phonation or vowel-register system in which the quality of voice in pronouncing the vowel is phonemic. There are two registers in Mon:

One study involving speakers of a Mon dialect in Thailand found that in some syllabic environments, words with a breathy voice vowel are significantly lower in pitch than similar words with a clear vowel counterpart.[21] While difference in pitch in certain environments was found to be significant, there are no minimal pairs that are distinguished solely by pitch. The contrastive mechanism is the vowel phonation.

In the examples below, breathy voice is marked with under-diaeresis.

Mon verbs do not inflect for person. Tense is shown through particles.

Some verbs have a morphological causative, which is most frequently a /pə-/ prefix (Pan Hla 1989:29):

Mon nouns do not inflect for number. That is, they do not have separate forms for singular and plural:

Like many other Southeast Asian languages, Mon has classifiers which are used when a noun appears with a numeral. The choice of classifier depends on the semantics of the noun involved.

Mon is a prepositional language.

The ordinary word order for sentences in Mon is subject–verb–object, as in the following examples

'They taught me English.'

Yes-no questions are shown with a final particle ha

‘Have you eaten rice?’

Wh-questions show a different final particle, rau. The interrogative word does not undergo wh-movement. That is, it does not necessarily move to the front of the sentence:

You wash what WHQ

'What did you wash?'